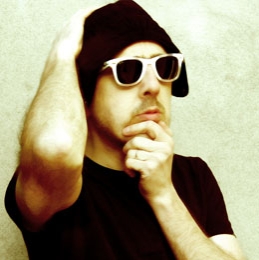 Few artists maintain the consistency and quality that Donnacha Costello has exhibited over his fifteen-year production career. In the often-transient world of electronic music, the Dublin-based producer has continually released records and albums that exude the heartfelt passion he has for his craft. The most steadfast critics of electronic music would struggle to deny the emotional and musical breadth of his output. His forthcoming album, Before We Say Goodbye, embodies this dexterity; just watch the delicate synths of With Me Still emboss the jacking drums of Stretching Time. Although the styles vary, he maintains a delicate balance; avoiding ham-fisted juxtaposition just for the sake of it.
His discography is a massive body of work, the lion’s share of which has been released on his own labels, Minimise and Look Long. Minimise is the home of his Colorseries, a colour coded collection of ten EPs recorded entirely on analogue gear in 2004. This organic approach was incredibly well received; the beautiful warmth of the records was a breath of fresh air in a time dominated by a thoroughly digital sound. Although he continues to use vintage hardware, Costello is unafraid to embrace the forward thrust of technology, an amalgamation that is naturally apparent in his music.

Although suburban Dublin could never be mistaken for a musical hot bed, the widespread respect and recognition Costello receives is on a global scale. Outside of a brief sabbatical in Berlin, the contemplative producer remains in his homeland; more than willing to let his music speak for itself. Here he discusses technology, his new album, and the importance of limitations.

You made your production debut in 1996, what music were you listening to at the time that’s inspired the path you’ve taken?

What I was listening to then doesn’t have a direct influence on what I’m doing now. What I’m doing now is based what I’ve internalised and learned over the years, and now I use this to express my own emotions and experiences. It’s not really influenced directly by any other music. I listen mostly to Peter Gabriel, Genesis, Phil Collins, Frank Zappa, Brian Eno, Joe Satriani, Steve Vai, and mid to late nineties/early – mid 00’s electronica like Autechre, Aphex, Vladislay Delay, SND, Carsten Nicolai, Frank Bretschneider, Taylor Deupree.

Your new album is multifaceted in the sense that it seems suitable for listening as a whole piece of work; but the individual songs can also stand alone in a club situation. Is that something you’re constantly aware of when working on a full-length album?

Well, some of the tracks could. The album is about 40% ambient and the primary intention of the album is for home or headphone listening. The club was pretty far from my mind when making it. That’s been true anytime I’ve worked on an album. In that context the focus has been on listening, not on the club.

This is your fourth album, albeit the first in seven years. Techno has never had an abundance of long players, many of which seem like a collection of songs rather than a cohesive product. This is a criticism you seem to have avoided, could you describe your thought process when approaching an album?

Well, to me “album” is a big word and denotes far more than just a collection of tracks. The idea of a “techno album” always seemed slightly oxymoronic and so to me, it is something that has to be approached with extreme care and attention. I definitely wouldn’t describe “Before…” as a techno album. It has elements of techno, house, deep house, ambient. It’s very melancholy (which is a constant theme in my work) and very emotional. If you say “techno album” people think “boom boom boom” and it’s pretty far from that.

There are a lot of different styles embedded throughout the album. The emotive strings of the opening track Leaving Berlin are a world away from the tougher sound of songs like Roll it Out, yet they’re far from mutually exclusive.

I like to use things that techno listeners or other producers might consider “out of context” and I think that by doing so you stretch the borders of definition in a given genre. However, it’s important to me that this isn’t simple juxtaposition but rather that it ends up feeling congruent within the context of the album.

You released the Colorseries in 2004. This really opened your music to a wider audience and many consider it to be a seminal moment in not just your career, but also in techno. A lot was made of the strictly analogue production…

Conceptually speaking, the Colorseries project was very much a product of its time. I began planning it in 2003 and at that time we were just coming out of the “Clicks’n’Cuts” era. People were engaging in very convoluted processes for sound generation. I just wanted to remind people that if they wanted a good bass, perhaps the best approach would be to use a synthesiser, or if they wanted a kick drum they might consider using a drum machine. People had sort of forgotten about how spontaneous and satisfying that was both as producer and listener. Musically, it was pretty much me doing my thing, expressing my emotions through music.

Has your studio set up changed since then?

It has changed completely in the intervening period and that’s pretty normal for me. My studio is in a perpetual state of flux with just one or two constant components.

Aside from those few mainstays, what new technology have you embraced?

Is this constant turnover necessary to hold your interest?

In some ways, yes. Having said that, there are certain pieces of equipment that I know inside out but I might not necessarily own at any given time. If I have a specific project, I might buy a specific synthesiser I know well and then sell it again when the project is done. This process also accounts for some of the equipment turnover.

You have two record labels, Minimise and Look Long, how do you see their functions differing?

Minimise was set up in 1999 as a platform for me to release my work in the simplest way possible (hence the name) and it continues like that to this day. Minimise is now digital only. We don’t use a distributor but instead have a direct relationship with beatport.com. If I want to release something, I upload it and it can be available for purchase 7 days later which is a dream come true for me. It takes most distributors about 4 weeks to get a digital product to retail. Physical product can take 3-4 months. Look Long, as the name suggests is a more long term, slow build scenario. We operate with regular distribution channels and do physical releases as well as digital. The music is also a little more varied. When I set up Look Long, I was a little tired of people associating me and Minimise purely with what is today called “minimal” which is a style I’m not into.

Do you think that the almost instant gratification that Beatport and other web sites can provide labels is diluting the pool of music that’s available? Are labels deliberating on the merit of a release less than before?

A complete answer to this would take up several pages. I love Beatport and I love to release music digitally. However, some people like to blame digital distribution for all kinds of woes and to demonise Beatport in particular. The increase in available music is inevitable and judgments of quality are wholly subjective. Therefore, focussing on the development of effective methods to help each individual find what he is looking for is the answer, in my opinion.

Your music has allowed you to travel extensively, however, you have remained living in Ireland. There seems to be this idea that moving to Berlin has become a prerequisite for success in electronic music. Is that something you’ve ever considered?

I was there for 6 months in 2008/2009 but I don’t think it’s necessary to be there or anywhere else in order to be successful. Success comes from mainly from hard work, that’s not really a secret. So, in my opinion, geography is not really the issue. If you go to Berlin and slack off, you’re not going to find it easy to be successful.

A lot of people, myself included, might be surprised to learn that you were in a band, The Uptown Racquet Club. Live instrumentation is not really a central focus of your music. Is that something you experiment with?

I’ve been in bands on and off since 1987. I have played guitar since 1985 and learned piano at a very early age so these things have always been going on in the background.

You have regularly talked about the importance of limitations for your music. Can you explain that concept?

That’s true. It stems from Kierkegaard’s assertion that freedom without limits is not freedom at all. It’s true in all areas of life. If there is no limit to what you can do then, theoretically, you can do anything. That sounds very liberating. However, it means you are now choosing from an abundance of possibilities. Infinite (or near infinite) choice has been shown to be a paralysing, counter productive force. If you set yourself some boundaries, creativity becomes much easier and you immediately become more focussed. One simple way to explain the concept is that without rules, football becomes a bunch of guys in a field with a ball. If you introduce rules, suddenly there is fun, there is skill, there is a level of enjoyment that was previously impossible. Play is one of the most important parts of human psychology and without rules, play does not exist. Rules/limits are critical.

Are these rules imposed in a physical sense through the equipment you use, or as personal boundaries that require musical ingenuity?

You’ve been releasing electronic music for the past 15 years; do you envision it as an integral part of your future?

Probably, yes. Whether as my profession or for enjoyment, I think I will always be creating music in one form or another.