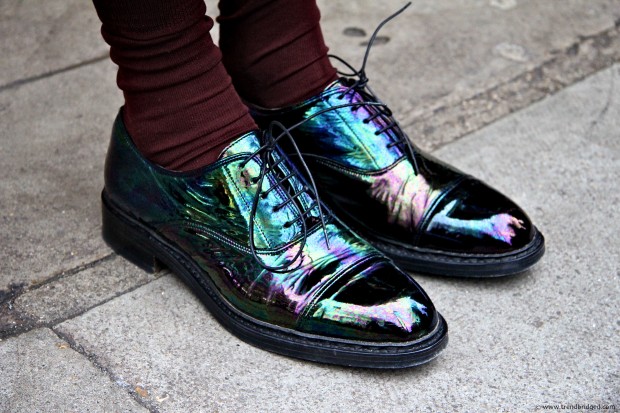 No one in the fashion industry does their own hair and make-up. So I decide to begin my second day at London Fashion Week by checking into the Mac lounge, where a team of make-up artists are powdering the faces of bloggers and buyers. I ask for something summery, so am given a bright orange lip in ‘Morange’, and a touch of shimmery powder for a dewy, glossy finish.

This isn’t the only benefit of a pass into the East Wing of Somerset House. There’s a neverending stream of free Vitamin Water here, and phone chargers, laptops and newspapers are to hand – which is pretty handy if you’re not lucky enough to have an iPad floating around in your complimentary Mulberry tote. But the main attraction, for me, is a series of coin-operated pin-badge dispensers. Like those ones that used to dispense ‘mood rings’ outside dodgy looking newsagents in the nineties, you pop in your coin (provided), twist, and out rolls a plastic capsule containing the pin badge of your choice. I grabbed Simone Rocha, Sister by Sibling and JW Anderson, and pinned them all onto my denim jacket. Fashion week makeover complete. 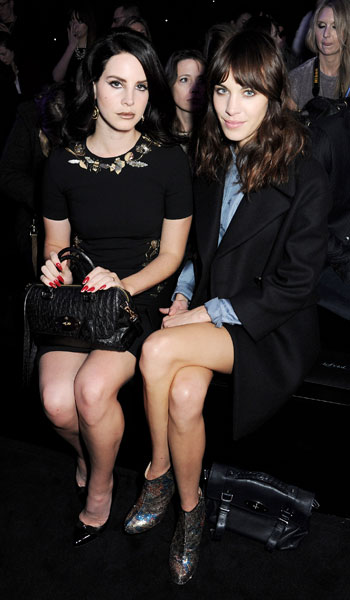 Other than jelly-bean munching and street style-papping, there’s not actually much going on at Somerset House today. Most of the best shows are off-site, including Mulberry, which is attended by actual, real celebrities: Lana Del Rey and Alexa Chung, both of whom have had of the honour of having Mulberry bags named after them, sit side-by-side in all-black ensembles on the F’Row. The collection has a loose, sixties silouhette and lots of magnified tartan and midnight blue and chestnut brown. It’s all very luxe, and very cosy. At one point, a charcoal grey poodle even trots down the runway in a Mulberry-patterned dog coat. 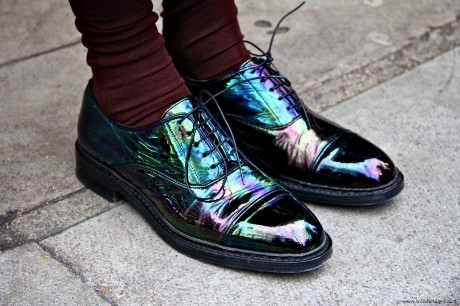 Meanwhile in Soho, Machine-A are having a store launch for their Brewer Street boutique. It’s a little, independent-run fashion show that supports contemporary and emerging designers, as well as stocking more established names like Raf Simons and Mugler. It’s well-curated selection of stock, with a well-heeled and achingly hip clientelle. Lots of silver, iridescent materials, prints and pops of bright colours dominate the rails for both menswear and womenswear, and brands include Louise Gray, Christopher Raeburn, Sibling and Ashley Williams.

There’s an event called The Vintage Collections on the fashion week programme, so I head north a little to that. It turns out to just be a vintage fair, but it’s worth going to just for Finsbury Town Hall’s decadent rococo interior. Vintage in London is taken seriously, and most of the sellers fully embrace their era of choice, dressed in head-to-toe twenties, thirties, or fourties. It feels like a different world to the bright colours and nineties revival of Topshop Unique, which I head to next. 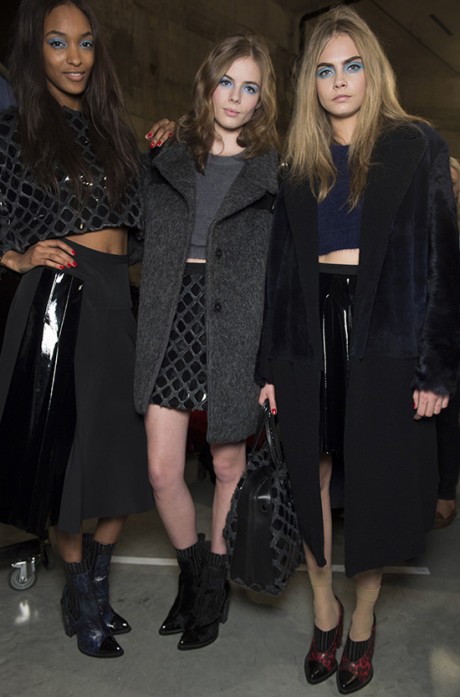 Topshop has their own show space for London Fashion Week, used for younger designers like Louise Gray, JW Anderson, Simone Rocha and Meadham Kirchhoff. It’s a huge, industrial concrete space in the Tate Modern, and a lavish reception leads us in to it with not only champagne, but a full coffee bar, Bakewell tarts, and paper take-out boxes of steak and ale pie. There are cameras flashing everywhere, not least because Pixie Geldoff is swanning around in Miu Miu heels and more Made in Chelsea stars are pushing by. Dublin’s own Angela Scanlon got a considerable amount of pap-action as well – represent, Scanno!

The theme is Britpop, and whispy chanteuese cover versions of Blur’s Girls and Boys and nineties house classics soundtrack the collection. There’s lots of jet black, highlighter pen orange, pillar box red, inky blue and toffee, and shiny plastic materials give it all a very Swinging London feel. Knitted crop tops expose taut midriffs, and shaggy furs and sheepskin add a very tactile quality to the looks.Things get a little bit more disco towards the end, with lashings of glitter glimmering under the spotlights as the models wind around the long rows of seats. The closing look is a flamboyant burgundy sequinned catsuit, with eye-popping cleavage (a rarity in the fashion world). It’s utterly perfect. 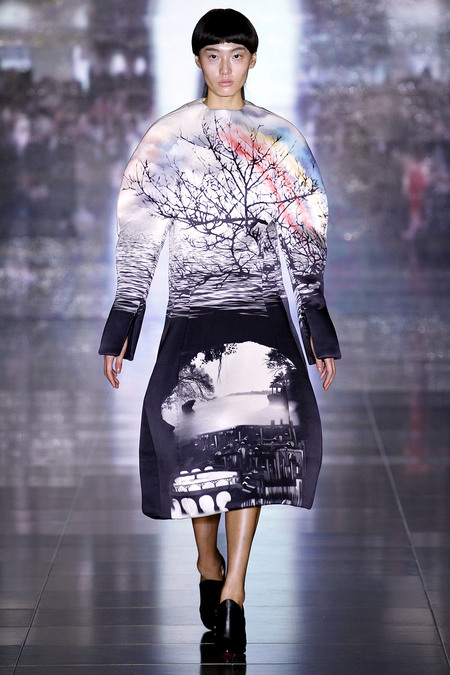 The show we’ve been most excited about this weekend is Mary Katrantzou, a Greek-born designer who has shot to fashion fame in the past few years for her use of eye-catching prints and bright colours. But while the rest of London Fashion Week seems to be going day glo crazy, Katrantzou is working with a much more restricted palette for Autumn/Winter 2013. Violet, lilac, and pastel pink and blue are complimented by black and silver in this collection, giving it a slightly astral, space age feel, but it’s more nostalgic than futuristic. The digital prints are reportedly inspired by nineteenth century photographers like Edward Steichen and Alfred Stieglitz, while the asymmetrical shapes evoke Japanese zen aesthetics. It’s a radical departure for Mary Katrantzou, which has divided critical opinion, but we love it.