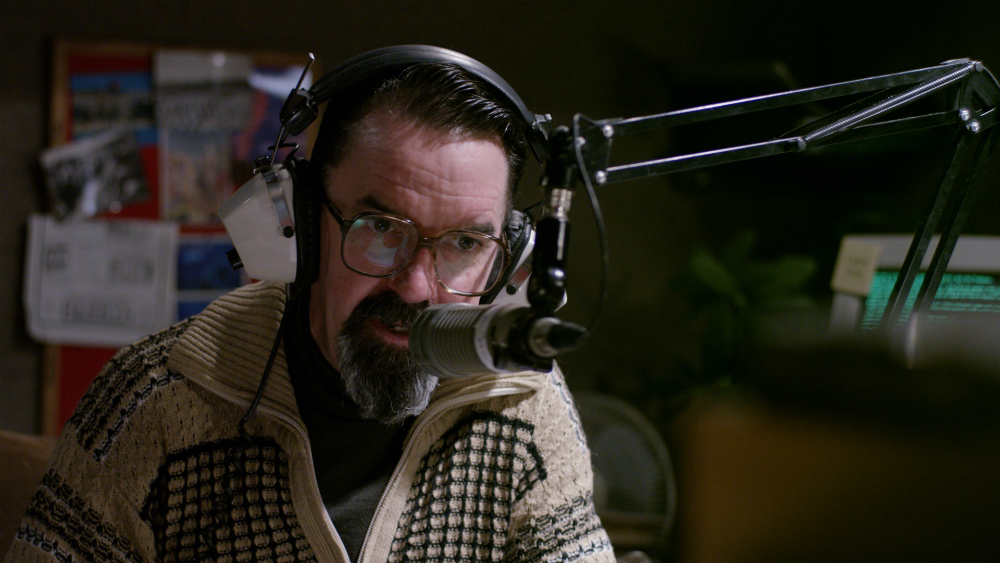 If you have such a fractious public sphere that you don’t have a public sphere, then how does that affect questions around history and time and being of your time? – Gerard Byrne

To transmit is to tap the political heart of social connection – Brandon Labelle, Acoustic Territories

The airwaves are historically a contested sphere of ownership. When radio first made an appearance in the 1890s, it was a wild west populated mainly by hobbyists and the US Navy, who used it for time signals and weather reports. Entities using radio for official purposes at the time were increasingly irked by amateurs interfering with their broadcasts, and gradually regulations and licences were introduced to end the, as a 1912 newspaper headline described it, ‘Mob Rule of [the] Wireless’. The result of this pruning of voices on the airwaves was the birth of a medium that could claim to access a ‘unified’ public — one voice at a time, one collective audience. Now, in our age of Netflix, digital TV and podcasts, of on-demand and targeted content that caters to the whims of the individual, analogue radio broadcasts might just be the last medium that appeals to the notion of a ‘unified’ public.

“Embedded in the idea of making a work about radio are ideas around a public sphere and radio as a way of actualising a public sphere. There’s a sense that the voice that’s broadcast over the airwaves is an appeal to some sense of a communal. The radio presenter, and the team behind them, are trying to reach as many people as they can, so therefore they have to negotiate some idea of a shared space amongst all the listenership — to me that’s something that’s on the wane, because as things move increasingly to distribution through the internet and a much more detailed analysis of listenership, there’s a way in which that sort of evocation of a public sphere is no longer as critically important.”

Gerard Byrne is speaking to me in his studio in Temple Bar Gallery & Studios. The room is filled with speakers, monitors, crates and boxes, drills, wires. It seems functional and transitory somehow — not a space to linger in. Byrne is discussing his latest work In Our Time, ahead of its Irish opening at the Kerlin Gallery this month. The video piece was commissioned for the 2017 edition of Skulptur Projekte Münster, a once-a-decade exhibition of sculptures in public places that happens in the town of Münster in Germany. The sprawling exhibition is the fruit of a controversy over a public sculpture that was installed in the town in the ‘70s, which the locals objected to. Skulptur Projekte Münster was conceived as a way to open out the conversation about public sculpture, public art, to the public. At this year’s exhibition, Byrne’s piece was installed in a basement annex in a public library in Münster.

“It was quite a cramped room, it wasn’t a big space. But in a way I think the scale turned out to have a very positive influence in terms of how people engaged with the work. I went back to see the show on the last weekend of the exhibition and I had this very interesting experience. The room was filled with people sitting shoulder to shoulder and there was something really interestingly communal about it all. It’s not something you encounter in the normal museum context. For me, what it spoke to is something that goes right back to the history of Skulptur Projekte Münster, which is that it increasingly feels like one of these legacies of a social democratic moment, a moment where the public sphere was acknowledged as collectively owned and therefore the discussion around public sculpture was something that needed to be addressed collectively by the citizens of the city.”

In Our Time is twelve hours of footage of a fictional radio broadcast, shot with actors in a mise–en–scène created by Byrne at Westland Studios in Dublin. A DJ (played by Phelim Drew) spins tracks, gives weather bulletins, plays jingles and speaks to phone-in listeners from his soundproof booth, while in an adjacent recording studio a group of band members (so it seems) tinker with instruments and chat. The overall effect is something slightly off-kilter, out of joint with its time. Anachronistic props unbalance the general late-70s tone of the environment. The intermittently announced time of the radio broadcast is tied to the real-life time of the gallery, emphasising the real-time nature of terrestrial radio. Nostalgic hits pull the viewer/listener back to the decade past, resulting in a constant tugging of temporal awareness. 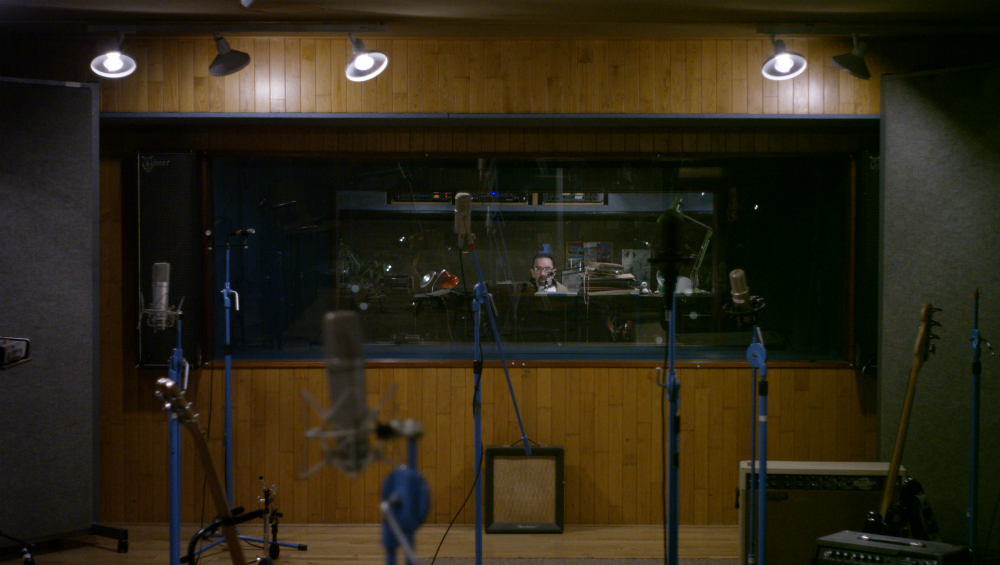 “Radio is in a way a regulator of time and of temporality. And radio technology has been used very explicitly historically for that purpose. But beyond that, there’s this concrete idea of radio and it happening in time, invoking the present. There’s a way in which it doesn’t really matter what’s being said, but something that underlies that is a type of patterning, a type of continuity. Terrestrial radio doesn’t have composition. A film or a play has a type of composition, it has an arc, whereas radio exists in the perpetual present.”

Byrne generated the script for In Our Time through a mixture of collaged extracts from historical radio shows and some original writing. This approach seems to have two effects – it invokes the ‘perpetual present’ of radio while simultaneously conjuring the contemporary fractious public sphere that Byrne mentions. 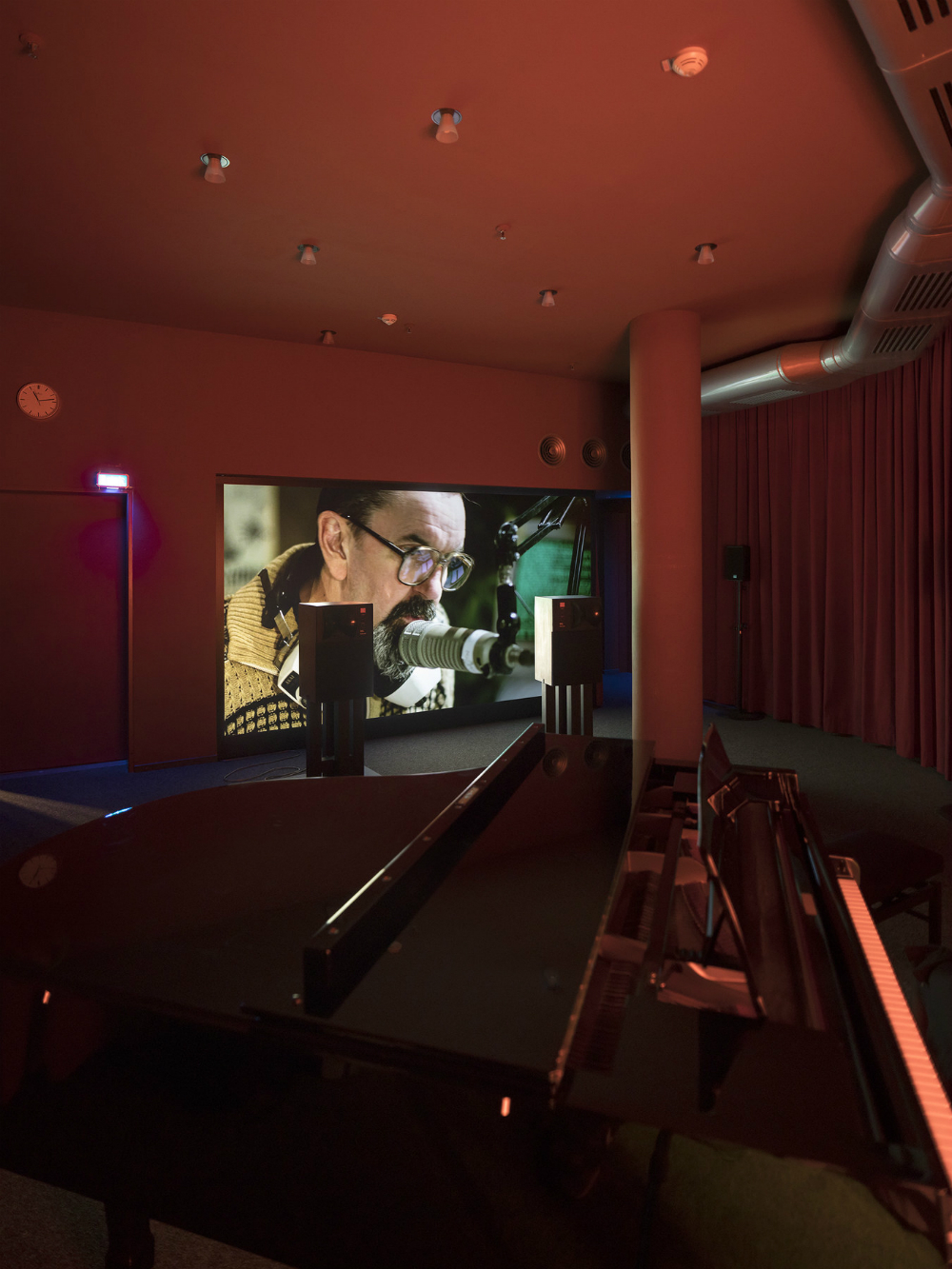 “I didn’t reconstruct a specific radio broadcast, instead I did a kind of aggregation, I sampled across a lot of different reference points. What I wanted to produce was not a coherent picture of a singular moment, more some sense of patterns or tropes or certain tendencies. The thing I realised from listening to these old radio broadcasts is there’s a certain schizophrenic character to some of them, especially the more hyped up commercial ones, where often the tone of the hosts could turn on a dime, and that reinforced this idea of a kind of moment to moment existence, almost like a goldfish kind of thing, no memory, no legacy.”

Through amplifying this ‘schizophrenic’ aspect of day-time radio by dislodging the usually repeated elements of a radio broadcast (the name of the radio station and the radio jingle change over the course of the broadcast), Byrne fragments the identity of the fictional radio station itself. There’s some poignancy in this, the sense of collective memory that’s invoked through nostalgic popular music and visual cues, contrasted with the fractured ‘personality’ of the radio station.

In Our Time seems to be simultaneously a eulogy to the idea of social democracy and democratically managed public space, and a provocation to reconsider this idea. “The period we live in at some level is the legacy of the 1960s,” says Byrne at one point in our discussion, pointing to a decade when the sense of collective action and collective participation in public life and public space was strong. With his latest work, Byrne conjures a world where the loss of the idea of a unified public sphere results in a sort of cultural amnesia, a state where society is living from moment to moment in a perpetual present; a goldfish society, with no memory, and no legacy.

Gerard Byrne’s In Our Time is in the Kerlin, South Anne Street, until January 20.