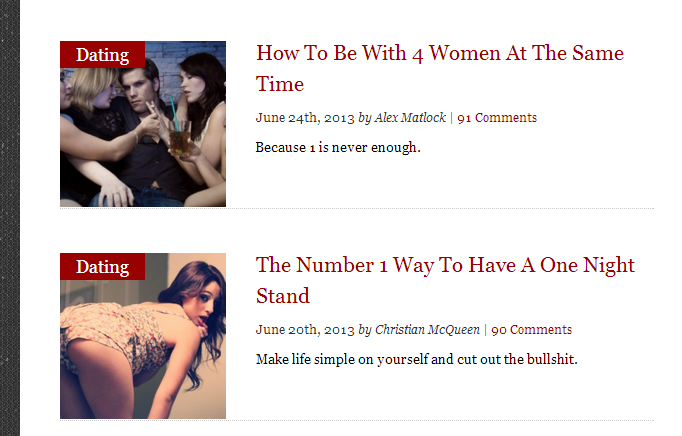 Last week, I was asked to write a piece about sexism on the internet. I didn’t think it would be a particularly difficult task – after all, how often do you come across websites so retrograde that they stir deep hatred of our depraved, misogynist society that you didn’t even know you had in you? Tumblr blogs in particular can be a goldmine for militant feminists looking for a reason to flare up, as many of them are simply a collection of gifs and quotes that follow a certain theme (and by “theme” I mean “rubbish humour”) such as the highly sophisticated “Women In The Kitchen” Tumblr (“How many men does it take to open a beer? – None. It should be opened by the time she brings it”). Other blogs had done all the hard work for me by putting together a selection of the very worst of the internet – from “Misogynistic Lyrics That Aren’t Rap” (does what it says on the tin) to my personal favourite, Bitch Make Me A Sandwich, in which tweets from people who post the hilarious phrase “make me a sandwich, bitch” on their accounts are paired with another one of their often mundane and revealing tweets. (An illuminating example: tweet 1: “Make me a sandwich bitch”; tweet 2: “#MyLifeIn5Words: single single single single single”). 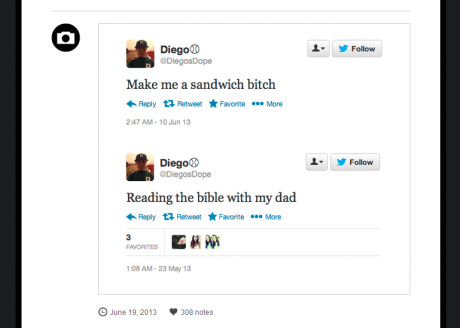 During my search, the almost comically chauvinistic (and thankfully extinct) UniLad page was one of the first to come up – it’s now been laid to rest, was a sort of badly written forum in which male college students swapped advice on how to pull unconscious freshers and various other tales of barely-consensual, borderline-illegal sex. An even more disheartening (because you can’t even blame it on the WKD-induced brain mush and null emotional maturity of college students) website is very much active and depressingly serious Return Of Kings (includes the extremely popular articles “How To Be With Four Women At The Same Time (Because One Is Never Enough)” and the equally grim ‘You-Go-Girlism Is More Toxic Than Feminism: The Insidious Effects Of Irresponsible Female Ego-Boosting”).

So, the internet is packed full with content that pretty much anyone would find rubbish at best and really offensive at worst; well, alright, but I knew that already. The real surprise came when I ran out of sexist websites and had to resort to Google to find more. I took a wild guess and Googled a few keywords that I thought would lead me to horrid, misogynist websites written by retrograde cavemen; so I started with the straightforward “what men want”, followed by “sexy Halloween costumes” and “girls+kitchen+men”. Oddly enough, though, the raunchy blogs I was expecting didn’t come up. No – I’d poke the internet incessantly, as if to provoke it to hand me its very worst, and yet I would inevitably be directed to the one and only supposedly empowering, iconic magazine for “fun, fearless females” that, ironically, included all the wicked keywords: Cosmopolitan.

I knew Cosmo wasn’t perfect, and I also knew that, while it’s brilliant for long waits in airports, it isn’t a particularly enlightening read in any other context. But when I decided to try another test and insert “men” in the Cosmo website’s search box, I was baffled by the results. “25 Ways To Seduce A Man”; “What Men Want (and How to Give it to Them)”; “Recipes for Seducing Your Man”; “Makeup Looks Men Love”; etc. Pretty much every article I came across offered female readers advice on ways to improve their looks or their whole self for the benefit of men. What struck me the most was not only the subtle creepiness of Cosmo’s advice, but also the fact that, were you to patch up all the glimpses of women that emerge from the magazine’s pages, you would probably obtain the kind of female specimen that all those horrible, exploitative Tumblrs and blogs are about. 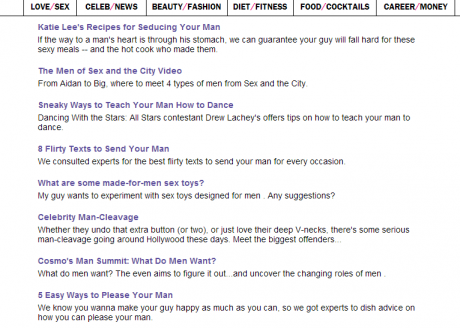 The second, more unexpected problem I found with Cosmo was that, since many of its articles are centred around men’s pleasure and satisfaction, said men are inevitably shown as seriously lacking emotional depth and being little more than sex-machines that can easily be bagged thanks to a particular hairstyle or a certain raunchy text message. In brief, I found that Cosmo (and many other analogous magazines) seem to oversimplify the psyches of both men and women: its articles revolve around the ideas of “sexy” and “fun” attributes that are almost never meant for a girl’s self-improvement, but rather for her partner’s benefit and the uncontrolled inflation of his ego.

An excerpt from a Cosmo piece (“12 Steps To Make Him Fall In Love”) exemplifies this idea perfectly: “Ask for his help: in this day and age when women are fiercely independent, a man can feel less able to give her what she needs – other than sex, what does he have to offer?” How degrading and insulting to both sexes, and what a range of antiquate stereotypes emerges! And in such a respected, well-established publication? In my opinion, it is significantly more harmful than an ignorant teenager’s tweets and rants about sandwiches.

I was genuinely struck by the fact that my research of defining keywords always led me to one of the most famous magazines “for the modern woman”: doesn’t that say a lot about current gender roles? Doesn’t the subtle kind of Cosmo sexism, then, work in both ways? By demeaning women, it demeans men too, as they are perceived as the gullible recipients of endless seduction techniques, and reinforces the common assumption they are only capable of shallow sexual relationships void of any real emotional attachment.

Is it that surprising, then, that sexism on the internet thrives and grows every day, if even the publications of today’s post-militant feminist society end up doing little more than strengthening the conception of women as men-pleasers – and men as simple receivers?