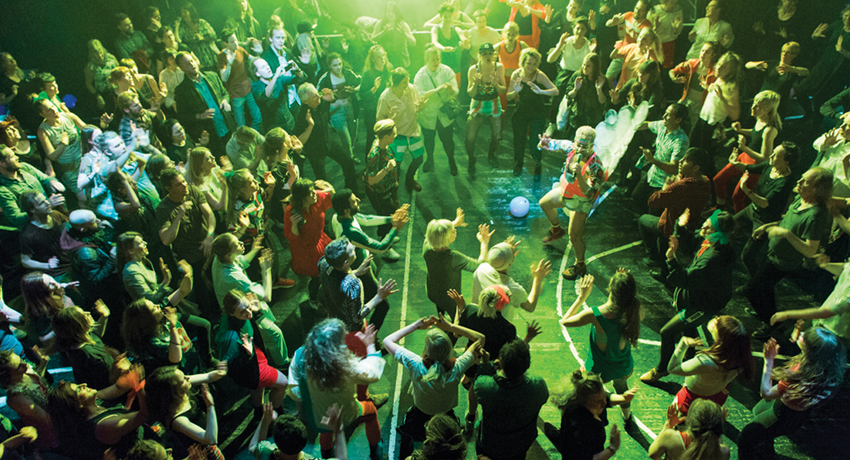 Just two hours before this order was barked at me I was at home, hungover, wearing pyjamas and drinking red wine with no desire to move. Despite having been looking forward to DEEP Aerobics for a number of weeks, changing into spandex is a difficult thing to build up enthusiasm for on a Sunday evening.

But at some point between slipping on a pair of silver leggings and being doused in glitter at Meeting House Square, I managed to pick up some zest. It’s just as well. DEEP Aerobics is not an event for the half-arsed, the self-conscious or the wavering in enthusiasm.

For anyone not familiar, it’s the live show of Miguel Gutierrez, whom you may have seen doing warm-ups for The Knife at last year’s Electric Picnic. If you missed it, he’s a sort of hyperactive aerobics instructor with an emphasis on togetherness. He might make you jump up and down until your balls/titties bounce (as applicable), then he’ll make you turn to the stranger next to you in the crowd, hug them and tell them you love them. You might have to turn to a portaloo and thank it “for taking all of our shit” in unison with the rest of the crowd. It’s faintly ridiculous, but a whole lot of fun, and there’s some valid truths lurking beneath the camp veneer. For tonight’s event, though, the togetherness is taken one step further – Gutierrez is no longer stood on a festival stage, directing us from his podium. He is in amongst us, and we run around him in circles, brush up against him as if we’re dancers in the very same performance we are observing.

Gutierrez himself is an overwhelming ball of over-virulent enthusiasm and positivity; a wailing parody of camp. Tonight, he wears multicoloured speedos, a Clontarf swimming cap with a red balloon attached to it, and some kind of homemade toga-type garment. And glitter. Everyone at DEEP Aerobics is wearing lots of glitter – there is even a “Transformation Bar” to help you with the transition into sparkling disco deity, should you not have your own supply. Arrive bare-faced, be sent back out into the party smothered in twinkling face gems and UV paint.

You are also expected to come dressed in workout gear – largely out of practicality, since it’s a pretty physical ordeal. Almost everyone not only obliges but surpasses the costume requirements. The crowd is a flurry of platform shoes, hot pants (on both genders), afros, sequinned jock straps, windbreakers, spandex, leotards, nipple tassels, balaclavas. Go wild – photography is banned and you won’t pop up on Instagram, adding to the carnivalesque spirit of the evening. Participating in DEEP Aerobics is a hugely theatrical experience, where the main performers probably aren’t even Gutierrez himself, but his costumed attendees.

The link to Queer Theory and LGBT culture is not incidental. There are moments when the audience is told to relinquish their gender, chanting “I am not a man! I am not a woman! I am both, I am neither, if you don’t like it take a breather!” DEEP Aerobics celebrates gender nonconformity, acceptance and triumph in face of adversity. (At one point, while “being flowers”, we are made to lie on the floor as an evil developer concretes over us – only to grow back up through the concrete.)

The message is an overwhelmingly positive one, and participation in DEEP Aerobics is a truly therapeutic experience – when was the last time you screamed at the very, very top of your lungs? It’s something we rarely get the chance to do, but it’s a tremendously cathartic and liberating experience, especially done in tandem with 100 or so other sparkling freaks.

But there is also something contradictory about DEEP Aerobics. Its whole premise is about inclusion and collectivity; about feeling anonymous in a sea of people, and the freedom that this feeling induces. But in this light, it’s also about conformity. Everyone dressed to the same dress code, following very direct instructions. There is a childlike freedom to DEEP Aerobics – in the relinquishing of power and responsibility to this benevolent cult leader. But surely this sort of herd mentality is precisely what DEEP Aerobics rejects?

For me this made the event no less entertaining, liberating, uplifting or enjoyable. But it did cross my mind that should someone turn up to DEEP Aerobics and not quite get into the swing of things – out of insecurity, or whatever reason – it could be potentially be very alienating. DEEP Aerobics is all about doing as the group does; and therein lies the freedom – it’s not about personal expression, but letting go of the ego. This is only comforting so long as you fall in with the group. Essentially, it replaces one kind of homogeneity with another – albeit one that’s delightfully swathed in glitter, and a whole lot of fun to be around.