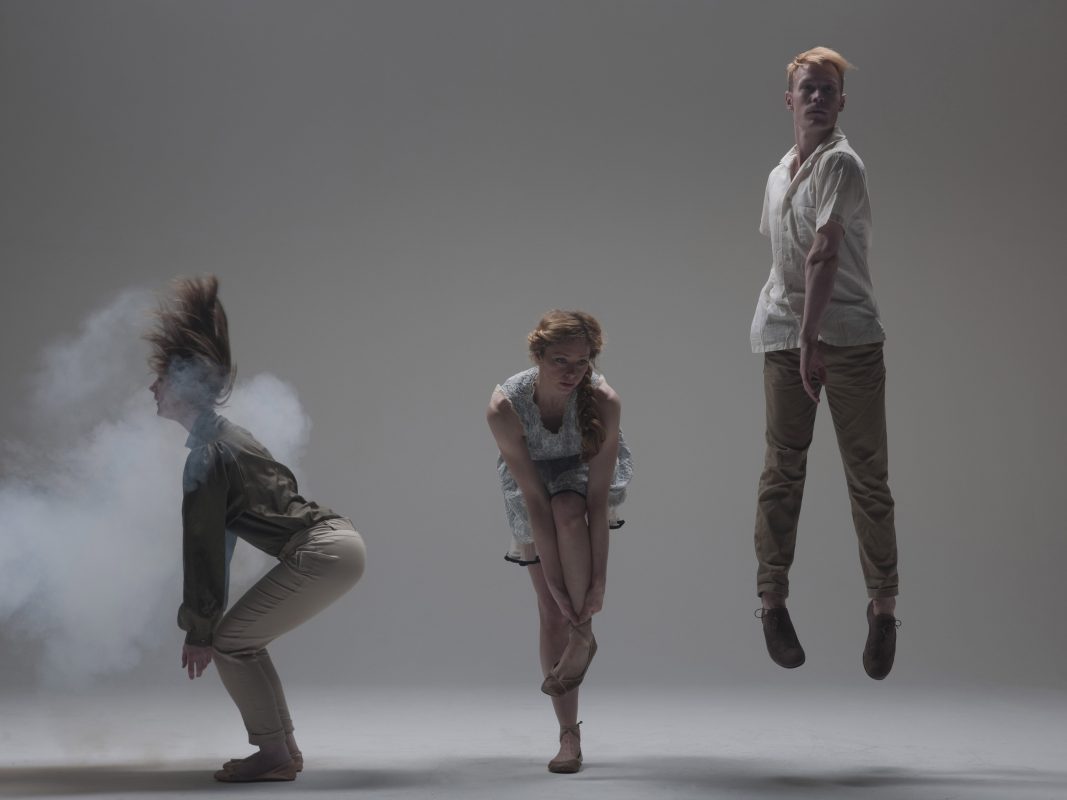 The second of our feature interviews with performers from the Dublin Theatre Festival is with Megan Kennedy from Junk Ensemble‘s production Dusk Ahead.

You’ve been working and conducting research on blindness in Newcastle. How did the process begin on this project?

We started by looking at a lot of photography books – one book in particular called Abandoned Places. And then we watched movies in the evening and then during the day we’d practice some of the pieces before bringing them to the cast, to see if they would stick, if it was relevant enough. So we did quite a lot of research on blindness and then invisibility – which took us down a different path, made us develop an ostrich section about sticking your head in the sand. Which brought us to the idea of being blind-folded. So we presented ourselves with the task of being blindfolded in the studio for a day which was interesting to say the least. Then we brought all of these things into the rehearsal space with the cast. Before we did that we did a workshop with visually impaired women in St. Mary’s in Stillorgan. They had the double disadvantage of being visually impaired and old. It was a really transformative moment working with them – the things you do in a normal workshop were no longer possible. We had to describe movements in such a way that would make sight unnecessary in order to understand them. We were also doing music lessons and singing lessons and they really responded that.

The quality of movement that comes from blindness is very specific. What is it about that quality that attracts you and how did you teach yourselves to replicate it for the piece?

It really is the movement that comes from not being able to see that interested us most, as well as the idea of being invisible – we were reading Jose Saramago. The initial idea is really inspired us was watching blind para-olympic runners. That inspired us to create this one-minute dance film commissioned by Dance Ireland called Blind Runner. It came from what happens to the body when you can’t see, not when you’re blind from birth, but when it’s been imposed upon you like with a blind-fold. I was the one running in the video, and your movement is quite faltering at first, and then you have run with complete abandon. It’s extremely liberating. That was one slice of interest, then we became closely connected with the idea of being always attached to something – whether it’s a rope, or being attached by the lip or by the hair as some of the dancers are in this piece.

You talk about being dependent and attached to something, and circumstances being outside of your control, which is funny because you work with your identical twin. How does that play out?

Yeah, we are very linked, and we’re very in synch about most major things. The things we wouldn’t agree on are small things. We started off doing a lot of duets together, and it was very much about being twins, this ability of having mind and bodies linked. Watch her disappear, one of the first pieces we did was about schizophrenia, or about this idea of a disorder of being split and being a twin. As we made bigger work we’ve started to step out of the work and have taken ourselves out of it, which makes for better work in our opinion. Anyway if we don’t agree on something we flip a coin.

Where does dusk come into all of this? In your description of the show you base it around the idea of liminality and transformation.

It’s the moment from day to night. We really wanted to create this arc in the piece – from day to dusk to night, to give a sense that this attachment is so heavy. It’s also that time when you’re not really sure what you see. We also had this French term in mind, “dusk is the hour between dog and wolf,” domestic to wild. There’s a certain wildness we bring in with the performers, things can become un-tame, they become dangerous if you enter this liminal space. Dusk is the overlying theme – but what we try to hone in on is the arc. It’s a lot of ideas to put together but because this is dance we’re given license to not follow a narrative form. The ideas will come out in your eyes when you see them – we have no control over it and that’s the beautiful part of creation for us.

Going back blindness and its quality of movement – what did you discover when you went to choreograph an entire piece around it? How did you practice it?

The simplest thing was the blind-fold and even what it should look like – we went with black, the least obvious one. The movement begins with this sort of loping very hesitant walk. The dancers actually cannot see anything for the duration of the piece. They have to watch every step, they use their hands, and they have to move towards sound, anything that it is appealing to their senses, like sound. They inevitably have to use their hands and their arms – that movement is so unbelievably real, you can’t fake that. You’re not cheating anything, it’s lack of spacial awareness that is so powerful. The dancers really don’t know where they are. When you put that in a theatre space you’re completely on your own, there’s no one to help you. So it’s been about finding safety measures as well as allowing for that beautiful quality of movement that comes from blindness.