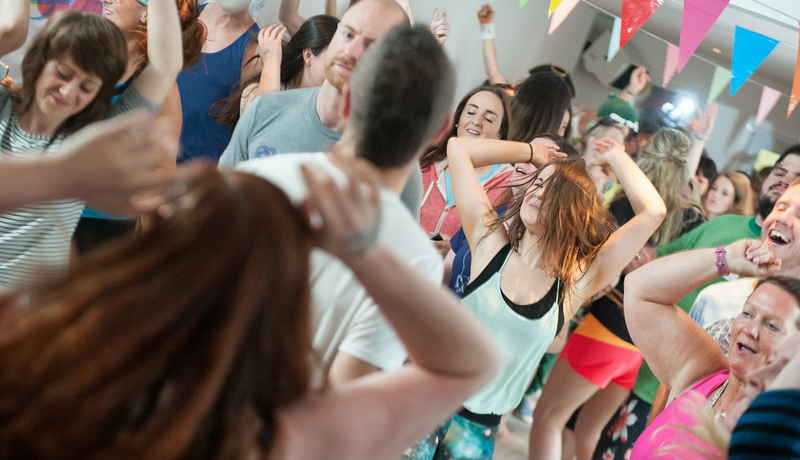 Early morning raving is usually the kind of thing you’d want to hide from your boss. It’s certainly not something that your boss might be encouraging, or, if you’re working for a big tech company, be organising in your office. Yet Morning Gloryville is trying to turn the idea of clubbing on its head by providing (sober) early morning raves in order to invigorate and energise the workforce worldwide. Totally Dublin spoke to Chris Flack, their Dublin agent, newly responsible for its introduction to the Emerald Isle.

Explain to us exactly what Morning Gloryville is.

Sam Moyo, who was trying to find an alternative way to start the day, set morning Gloryville up year ago. If you look at the drudgery of commuting, Morning Gloryville provides an alternative to that. Of course you can go to the gym, but that can still feel monotonous. People want a new and refreshing way to start the day – and that’s what we’re giving them.

For me, I was sold on the concept, but until I actually started at 6am I didn’t realise how much energy you have in the morning or how right it feels.

So what are the health benefits?

From a mental perspective, music, dancing and really just the happiness of being in a place with a lot of people who are sharing a bit of joy is hugely beneficial. There’s definitely a lot of love in the room – in fact I saw quite a few people exchange numbers before 7am which is fantastic.

The only negative, is that you’re really sore the next day! It’s physically hard work, but in return, you have an enduring buzz from all the endorphins you’ve released. By night-time you’re exhausted, but that’s a great feeling.

Have you found that people find it difficult to lose their inhibitions without the effects of alcohol? What have you done to foster an atmosphere where people feel comfortable without turning to a drink to relax themselves?

When you arrive you feel like you’re in a magical kingdom. Immediately you feel a little bit of escapism. No one really seemed to have problems losing their inhibitions or self-consciousness. The only people who weren’t really going for it were those who turned up in suits. They couldn’t dance as avidly, because they were actually physically restricted by their clothing! I strongly believe that we all want to dance; we all want to let it out. You see people tapping their feet on the Luas, or singing along in the car to work. Now they can actually do this with us, before work.

How do you make the music accessible to such a diverse audience?

One of the more conscious decisions we made was to go with a very open mindset with the music. In other cities, they’ve made it very “hipster”, very “cool”. You can see this especially in London. We wanted it to be quite like going to a wedding. All the songs are cheesy or just classics. That’s the kind of music that makes people jump up and down.

Did you feel you had to dismantle the idea of ‘rave culture’? Are there any similarities between that and what you guys are doing?

A lot of people involved in the set up of Morning Gloryville, including myself, were involved in the rave scene in the early 1990s, so I know how that felt. Although this is totally clean from a drug and drink perspective, there are a lot of things that feel quite similar. It’s just so mental. People are there at 6.30am, and everyone’s just going for it. Typically a rave is just a room full of people dancing. For me, I almost feel like I’m re-living that in a way. I set this up because I wanted to have a lot of fun as well, and that’s what I’m doing. It’s great.

Can you explain the concept within the context of the increased move towards the philosophy of tech companies and their denunciation of the suit and tie world of business?

The two definitely have similar motivations. The buzz people are on afterwards puts you in a really efficient mood. Often, I’ve been to meetings straight after I’ve been to a Morning Gloryville, and I’m on great form. What gets me is going into that suited world, knowing you’ve just come from a sweaty dance-floor with a massive group of people who are just letting go. There’s something really invigorating about that. A lot of the big tech companies have come to us, saying that they want to have internal events with us.

On top of this, I’ve seen Dublin change recently, becoming a lot more focussed on “mindfulness”. Tech companies seem to have a lot more focus on the life/work balance, and this fits in perfectly with us. People may have a lot on their mind when they come in, but they can switch off- jump up and down for 2/3 hours and it’s all just going to be gone/forgotten. After that, they can go into work fresh and revitalised.

This all sounds incredibly inspiring, but we can’t help but notice that the ticket prices are quite high. Why is this?

Financially – we don’t make any money ourselves, it all goes back into making the next event even better. Perhaps we will in the future, but not right now. To be fair, for €15 you’re getting quite a lot. You get a lot of love firstly. Everyone who came along last week got a hug and they loved it. It was beautiful. We’ve also got a team of motivational dancers, an MC, free massages, flash mobs, people teaching you the Can-can, or a Congo line going on. You don’t get that anywhere else. Maybe at a wedding after a few drinks, but if you can have that before work… imagine that!