Dubliner Sharon Kane is the creator of Sweet Jane, an outstanding pop culture website which specialises in digitising and republishing original print content from the 1960s and 1970s. Covering fashion, illustration, adverts, rock ‘n’ roll, the underground scene and everything from pop design to psychedelia, the site has attracted an international fanbase. Brian Mahon of Brand New Retro asked Sharon to share some scans and stories with us.

How did you choose the name and logo?

Myself and my sister Dandelion were listening to Loaded by the Velvet Underground while I was trying to think of a name for the blog, when Sweet Jane came on, she suggested that…and it felt right. The logo is an illustration by the artist Caroline Smith for Intro Magazine (1968), I have a lot of  admiration for both, they sum up everything I love about print design from this period.

Which magazines do you use?

I favour 1960s/1970s magazine publications from the UK, such as Petticoat, 19, Jackie, Rave and Intro, the latter two being particular favourites. But I also feature content from Eye Magazine, Seventeen, and Life (USA), Twen (Germany) and Plexus, Paris Match (France).

What’s involved in creating a post for Sweet Jane?

Some are more time consuming than others, as I like to do a lot of background research to see if the original content can be expanded to include new details. I also spend a great deal of time accurately crediting the original source, it’s hugely important to me that everyone from the photographer to the designer is acknowledged for their work, particularly because of the social media sharing culture we now live in. On the other hand, if I open the cover of a new ‘old’ magazine, and there’s a Woolworth’s Baby Doll Make-up advert in there, that goes straight up within the hour, the artwork is so gorgeous I just can’t resist.

It’s one called The Rise and Decline of the Afghan Coat 1966-197?, which also features an interesting comment from Craig Sams, one of the first to import them into London in 1966. These particular jackets were the ones sold to The Beatles through to the Granny Takes a Trip boutique on the King’s Road, the trend soared overnight after they were photographed wearing them.

Do you get many research requests?

Yes, from design students, fashion historians, vintage collectors, book publishers, fashion journalists and documentary makers. I’ve contributed to some really interesting projects such as the BBC documentaries Shopgirls: The True Story of Life behind the Counter, and Living in ’66. I’ve also had great feedback from people from the original 1960s/70s scene, including designers and boutique owners such as Barbara Hulanicki, and I’ve heard that Anna Sui has recommended it too, which is very flattering.

Which book, film and record would you recommend to anyone keen to know more about the 1960s?

Days in the Life: Voices from the English Underground 1961-1971 by Jonathon Green, Smashing Time (1967), starring Lynn Redgrave and Rita Tushingham, and Forever Changes by Love. 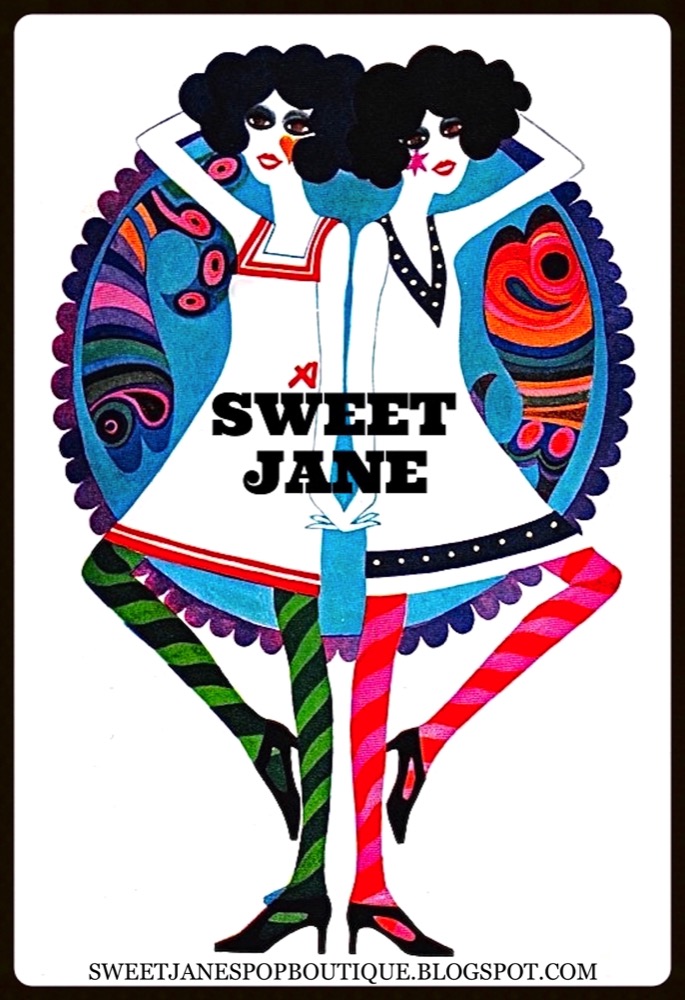 What’s next for Sweet Jane?

I have a background in fashion design and digital marketing, so there are plans to launch a Sweet Jane clothing label online. I also want to further explore the boutique culture of the era. I feature a lot of the less well known shops and designers, because I think it’s important to document them before they’re completely lost, so who knows, if I can gather enough research material there may be a book at some point.