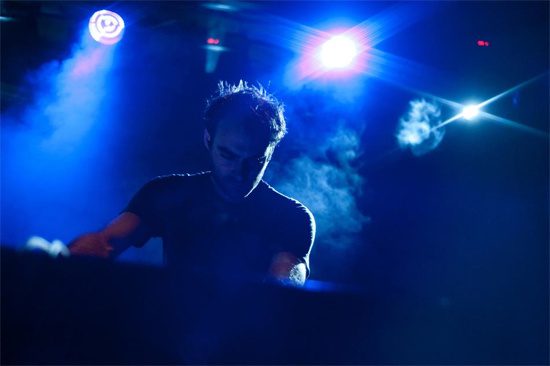 Ren Schofield has been making odd, out-of-step techno under the name Container for a few years, though his recorded output stretches back to the mid 2000s under various different monikers, most notably God Willing. His previous work mostly falls under the umbrella of noise music and he has brought elements of the noise aesthetic to his current project, fusing them with techno to create a compellingly original hybrid form of dance music. With two LPs on the Spectrum Spools label under his belt, Container is gearing up to release an EP on Morphine Records this month, followed by a US tour and a subsequent European tour spanning eight countries.

I read in an interview you did for Resident Advisor that you don’t have as in-depth a knowledge of techno as a lot of people expect you to. Do you think this has benefited you in terms being able to make music that doesn’t fit perfectly within the confines of the genre?

I became interested in making techno after hearing Daniel Bell’s Losing Control. For some reason that song made a big impression on me and got me very interested in repetition, minimalism, and vocal samples, so I used those elements as a guide. But aside from that track, when I recorded my first tapes and my first record, I wasn’t listening to any techno music at all, and was just going on what my idea of it was. Now that these records have come out and I’ve played a lot of techno shows and been exposed to a lot of new music, I am listening to it more, and I’ve found things I like, but a lot of it still doesn’t do anything for me. It’s not that everything I hear has to be caked in hiss and grime and noise for me to like it, but I do prefer that to something that is clean, clear, and digital…so getting to the point, I’m sure that my absence of techno knowledge in some sense did contribute to me ‘not fitting perfectly within the confines of the genre’, but I’m not sure my sound would be much different had my knowledge been greater.

I’ve always preferred to listen to dance music on headphones than in a room with other people. How do you prefer to experience it, and following on from that, do you have an expectation of how people should listen to your own music? Your transition from noise to techno would seem to indicate a preference for discernible, danceable beats, which are by nature, suited to a collective, club-oriented environment.

Aside from performing, I really have no business being in a dance club, it’s just not an environment in which I personally thrive. I can’t really get into DJ sets because there’s not as much to focus on as when someone is performing live. I’m not into dancing and listening to music with a bunch of people in a giant room…weird, I know. The majority of my music listening is done at home or at a friend’s house or something, however, I can see the appeal of hearing music in a club setting, and as a performer I like playing in those settings very much. I certainly don’t have any expectations of how my own music should be listened to, I can see it lending itself well to the club setting as well as at night at home.

Have you ever felt a struggle to reconcile the perhaps somewhat clinical nature of techno music with the essentially ‘human’ aspects of noise music – error, disorder, spontaneity and so on?

One of my first impressions of techno after I actually started paying attention to it a little bit was that it was funny almost that some of the artists went under their own names. It just seemed weird to me to give a human name to this highly mechanized, flawlessly timed series of well-polished clicks and bleeps. I especially felt that way about some of the really minimal stuff, like it almost should just exist as a genre without being separated and categorized by artist and project names. The idea of music existing in a generic way got me pretty excited, and I’ve tried to incorporate that into Container a little bit from sparse titles to reoccurring themes.

The synthetic, inhuman, and clinical qualities of techno are appealing to me, especially because you don’t see those traits in ‘noise music’ as often. When you’re programming a machine to play music, it’s nearly impossible to have error and disorder without it being intentional, which obviously negates it as being incorrect and disorganised to begin with! This has led to some confusion for me, as a lot of people have told me my music ‘sounds improvised’ and were really surprised when I told them that it was entirely composed, so in that regard I’ve felt no struggle trying to deal with bringing these two aspects together, even though it’s something I had never knowingly planned on doing.