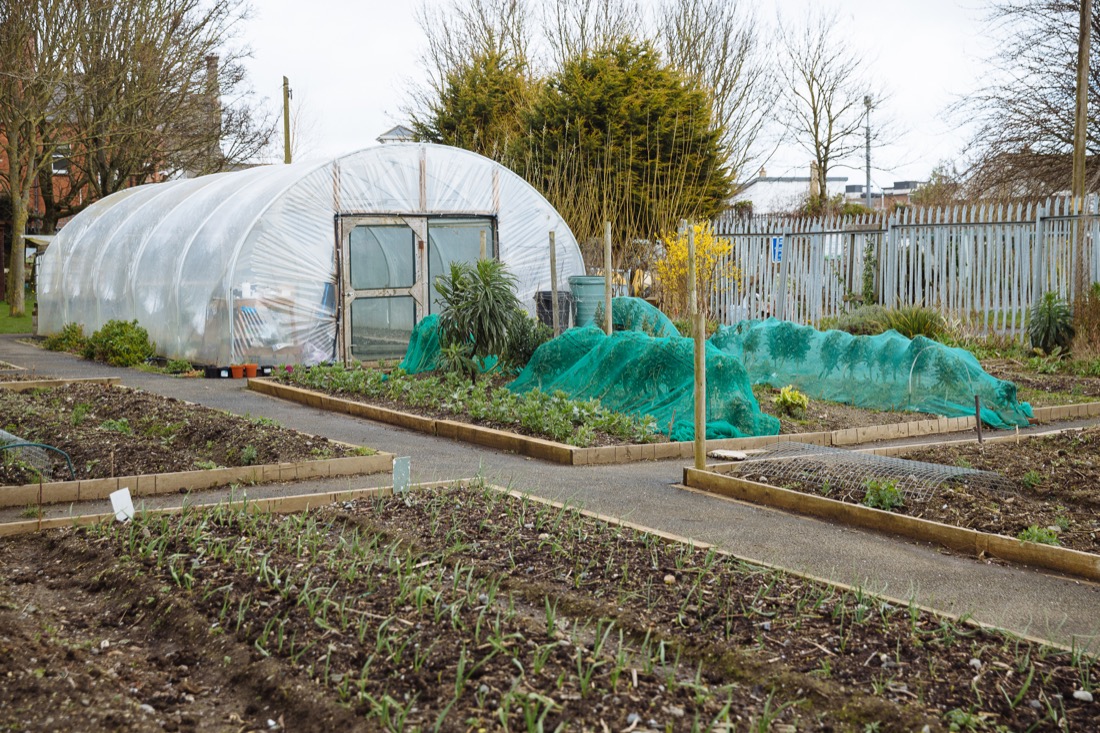 Plans for a City Farm in Ballymun are adding to a regeneration process which is literally rooted in local soil.

“To listen to some people, you would think kids around here have never done one positive thing, but given the opportunity, their enthusiasm is amazing.”

Without the words ‘Joseph Plunkett Tower’ engraved into the single pink archway off Balbutcher Lane, the thirteen acres beyond might seem to be little other than a pleasant park; a calm stretch of hilly land that sits behind a school and church. Once that circular plaque bearing the title is spotted, however, history soberingly grounds you.

The Joseph Plunkett was one of seven fifteen-storey tower blocks erected in Ballymun during the 1960s. Each named in honour of an Easter Rising leader, this hastily executed plan to house thousands of inner-city slum inhabitants was initially presented as a luxurious prospect. But inadequate funding, maintenance and amenities turned this Utopian place into a centre of urban decay within two decades. 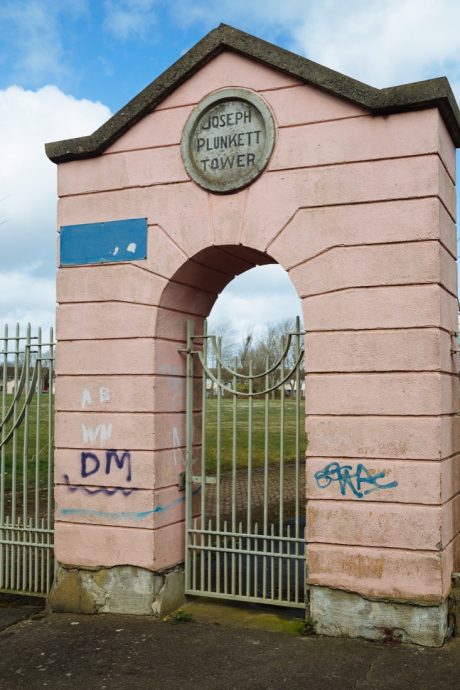 These towers became synonymous with crime, heroin and poverty. And once a regeneration programme was launched in 1997 to redeem this North Dublin suburb, they were demolished one-by-one. Starting in 2004 and ending in 2016, Joseph Plunkett was the last to come down. Henceforth, even the mere mention of high-rises as a solution to housing shortages in Dublin became taboo. Nevertheless, for what perceptions of hopelessness are projected onto the land from outside Ballymun, locally this looks like the spot to start over.

“That’s where we’re going,” Stephen Hayden, the chairperson of Ballymun City Farm tells me as we stand across the street by the old derelict shopping mall. “You can see the potential on that site. It has “farm” written all over it”, he enthuses. 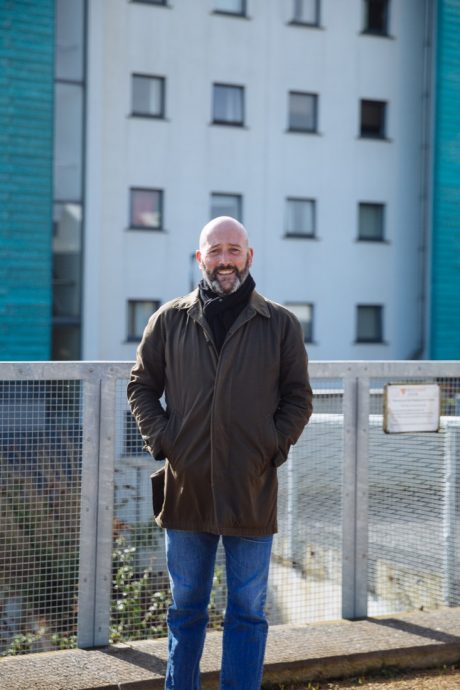 His plan is to set up a city farm; a communal, educational and recreational space for people of all abilities to engage with agriculture and horticulture. Focusing specifically on issues of environmentalism and organic food production, the Ballymun City Farm is intended as a grassroots, voluntary contribution to the community.

“Twenty-two years into this regeneration project now, is it?” Stephen asks rhetorically. “And still it’s not completed. A billion euro spent on regeneration.”

The regeneration process was undertaken to move the towers’ residents into new improved homes. Yet, the project faced a setback when several houses were found to contain pyrite, a defective material known as ‘Fools Gold.’ Over €10.5 million was needed to solve the issue. And although more than 2,000 home would eventually be built, the same issues that wrought havoc on the flats were making a return. Coupling this with the recession which halted the construction of an €800 million shopping centre and by the time Ireland began to recover, Ballymun was still left trailing behind.

Broken Window Theory was cited as chief among local concerns during plans to salvage the area. “A piece of property is abandoned, weeds grow up, a window is smashed,” wrote the theory’s proponents, James Q. Wilson and George Kelling in a 1982 Atlantic article that popularised the concept. If the window is not repaired, litter gathers and loitering ensues. Anti-social behaviour increases and eventually leads to serious criminal activity. Without any indication of a robust authority, or even a person willing to mend the broken window, the working class urban area is effectively informed that nobody is interested in supporting them. Mistrust towards statutory bodies then intensifies, locals are reluctant to seek help, and a view from the outside cultivates denigrating images of such communities, isolating them more and more. 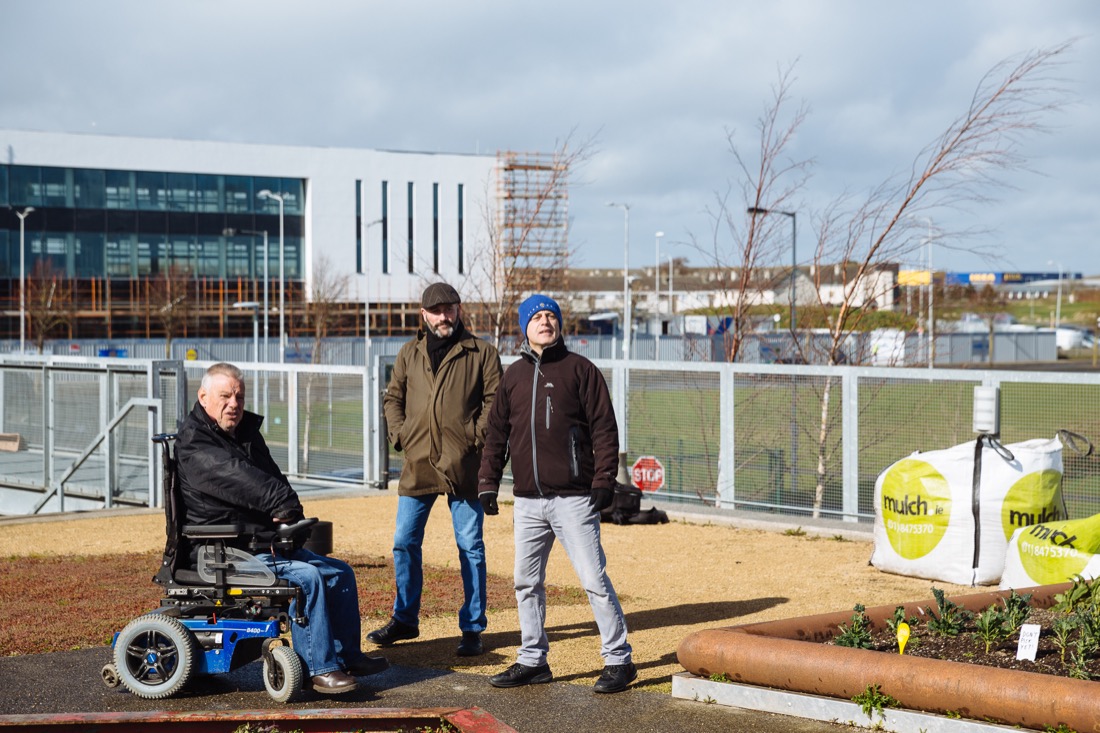 A city farm could effectively be the first step towards repair. Conceived as a community garden, the original intention was to reclaim a green adjacent to the Joseph Plunkett where fly-tipping, refuse burning and anti-social behaviour was commonplace. Proposed to Dublin City Council by a committee of experienced gardeners, in short, the idea was to start by mending the “broken window,” and instill a sense of pride among locals in their home. From there, they could begin to change the negative perceptions held towards Ballymun.

“Unfortunately, Ballymun does have a stigma from a long time ago,” laments Ronnie O’Connell, co-founder of Muck and Magic, a local, voluntary-led community garden.

“There is an invisible barrier for a lot of young men and women here when they go out into the world,” Stephen agrees. The world does not see this place the way they do. Google Balbutcher Lane. What shows up are bad news stories; residents on trial for possessing a submachine gun, gangland crime, declarations that the suburb is a national litter “blackspot”. The broken window is now a story shared online.

“We constantly have to compete with these headlines, easy headlines that don’t reflect the community,” he continues. “If you look at the percentage of positive stories to negative stories the tendency is towards the sensational.”

“If we can change perceptions and get people to realise this is not the place you think, these aren’t the people you imagine, then we can improve the prospects for our kids.” 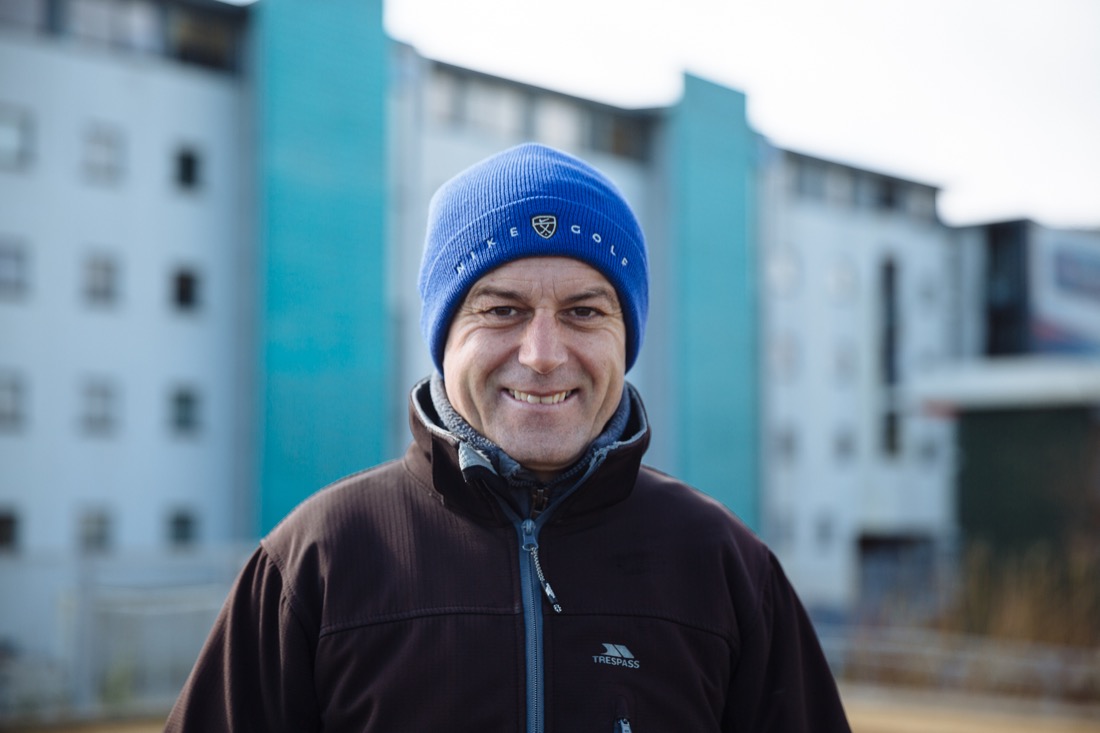 What they want is to take the community back to its roots. “There’s a history of farming in the area,” says Michael Keating, an award-winning local wildlife photographer and bus driver.

“I worked on a farm in the ‘70s and ’80s just up the road,” he continues. “You have to remember, the M50 wasn’t always there. From the Axis Theatre to Santry Cross was all just fields. Countryside. We’re so close to countryside. We knew a farmer there. He used to give us jobs; drive tractors and combines. I’ve these memories of the hay bales and jumping off trees. That was only up the road.”

“People on Facebook tell us when they were kids, they’d be coming down in the morning shooing cows,” Stephen adds. “DCU was once the national centre for agricultural excellence. That is what Ballymun is built on. There is a generation that realise the value of those experiences growing up. Now another generation is not getting those opportunities for a rounder appreciation of life.”

“Scratch below the surface,” Stephen insists, and the three men guide me around the area to do precisely that. In the same way that the ‘Joseph Plunkett Tower’ plaque changes one’s view of a grassy plain, they altered the scope by recalling this construction site used to be a meadow and that road used to be farmlands.

“There were actually peregrine falcons nesting here,” Michael points out as we reach the old Boiler House to admire its gargantuan red and white chimney. Formerly the largest civic heating scheme nationally, the Boiler House went up at the same time as the flats, and supplied them their heating and water. Yet, when demolition was offered as a solution to the towers, a decision was made to salvage this building instead. The result of this choice is the Rediscovery Centre. An environmental social enterprise described as a “3-D textbook” in experiential living, its core principle is that waste is not an end, but an opportunity. 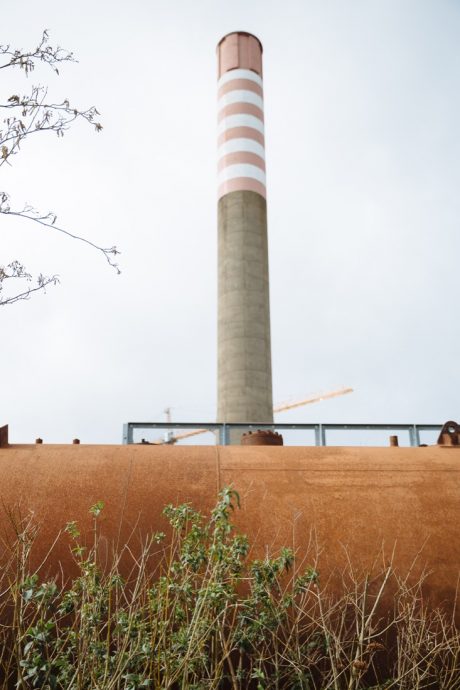 “Everything in there is recycled,” Stephen says. There is a genuine sense of pride in his voice as he points that out. Indeed, at each turn there is something that the three men not only want to show me, but admire for their own selves too. When they point out a vertical garden that grows up the side of one façade, Michael drops behind briefly to photograph it as the rest of us proceed up to the rooftop garden, passing sensory pillars, a mosaic of repurporsed plastic recreating ‘The Great Wave’ Ukiyo-e print and the bottom half of a clothing mannequin, painted white and wrapped in Ethernet cables.

“There shouldn’t be a construction that doesn’t have a rooftop garden,” Stephen says once we reach the top.

“I divide off these beds with comfrey,” Ronnie says, guiding me around a set of zig-zagging soil beds containing everything from red lettuce to elephant garlic. Then he gestures to a small enclosure across the green from the centre, which is where his Muck and Magic community garden sits. Proceeding there next, Ronnie explains that he co-founded the place in 2011 with a group of local volunteers involved in the Ballymun Gardening Club. 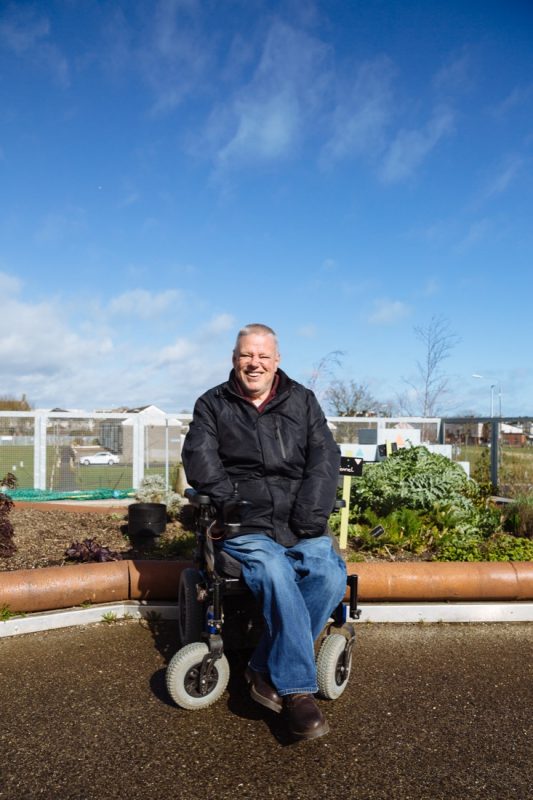 An “oasis”, Stephen calls it, noting too that this is a partial template for the city farm. There is a poly-tunnel, a wormery, a gazebo, a living fence woven from willow and an “insect hotel” built from wooden crates, baskets, bamboo, mussel shells, bricks and grass. “We have hedgehogs underneath,” Ronnie points out.

Inclusivity is a vital part of Muck And Magic, as it is will be too in the City Farm, which Stephen says is engaging with a series of disability service providers at present. Ronnie is a wheelchair user and has mounds of insight on how they can accommodate all people. In Muck And Magic, he was sure to include a series of raised flower beds, propped up like tables so as to enable wheelchair users a chance at working the soil.

“You can get your wheels right under it,” he demonstrates. “People wouldn’t think of that.”

“My angle with the City Farm is that I have a foot in the door teaching people who are physically challenged, mentally challenged,” Ronnie explains. “For people who have different challenges, animals are the best cure of all, petting goats, sheep, rabbits.”

The bacteria in soil too, he says, “stimulates the brain.” “For blind people, it’s magic. Cerebral palsy, it’s magic. Even if they can’t dig, they love it.”

The one pressing concern for Ronnie is the future of his beloved garden. The site on which it is run was put up for sale two years ago. “I’m a bit afraid. It’s so well organised. Ah, I’ll be sad to see it go.” 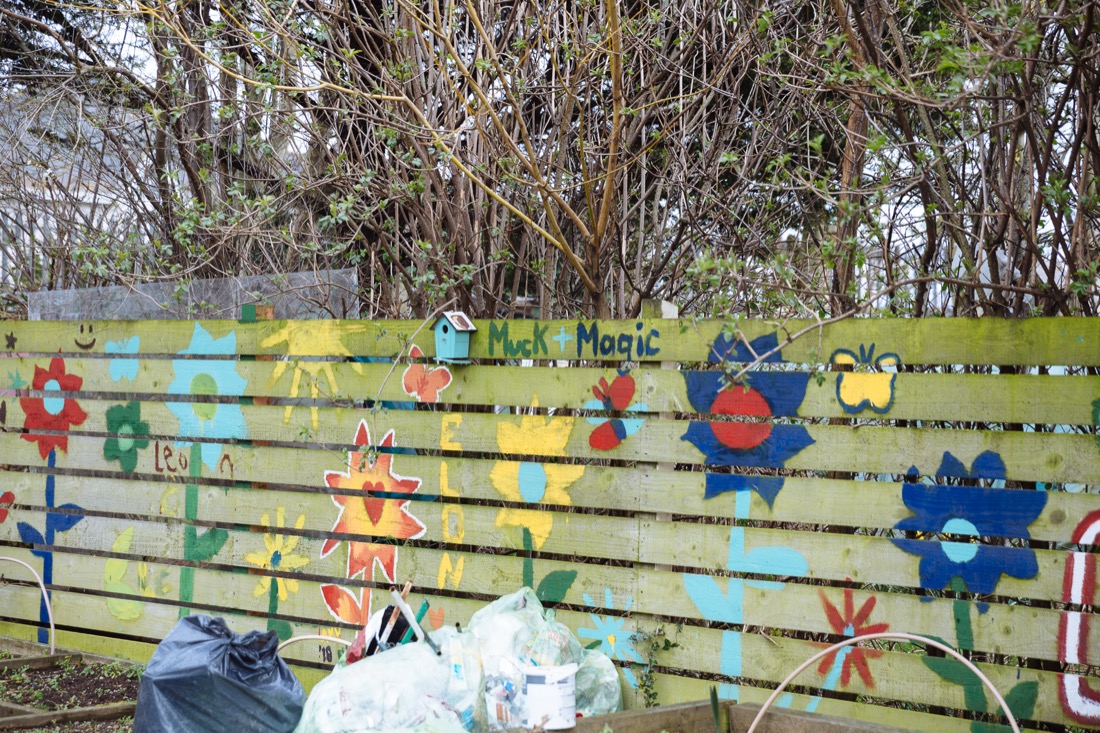 “It just needs to be moved to the new location,” Stephen insists at this point. “Muck and Magic will be a part of it. You immediately have an element of the farm established here and that amount of investment put in over the years… None of it will be lost.”

The blueprint for the City Farm was completed in April 2019 and submitted to Dublin City Council. “It has been agreed that a proposed site for the City Farm and Community Gardens will be included in the development of a Masterplan for a site at Balbutcher Lane,” their spokesperson commented.

“We’re going on a portion of this site,” Stephen informs me himself as we stand on Balbutcher Lane. “It’s something we need to agree to: the exact amount of land they want to give us, and as soon as we sign off, we can make plans.” And although, Stephen explains later that Covid-19 caused delays to the process. Thanks to the wonders of Zoom they’ve been able to keep the momentum going, working away in the background.

Nothing is stopping the new day from coming, as far as they are concerned. Ballymun doesn’t end on a note of neglect and decay. “It’s a whopper of a story,” Ronnie says. 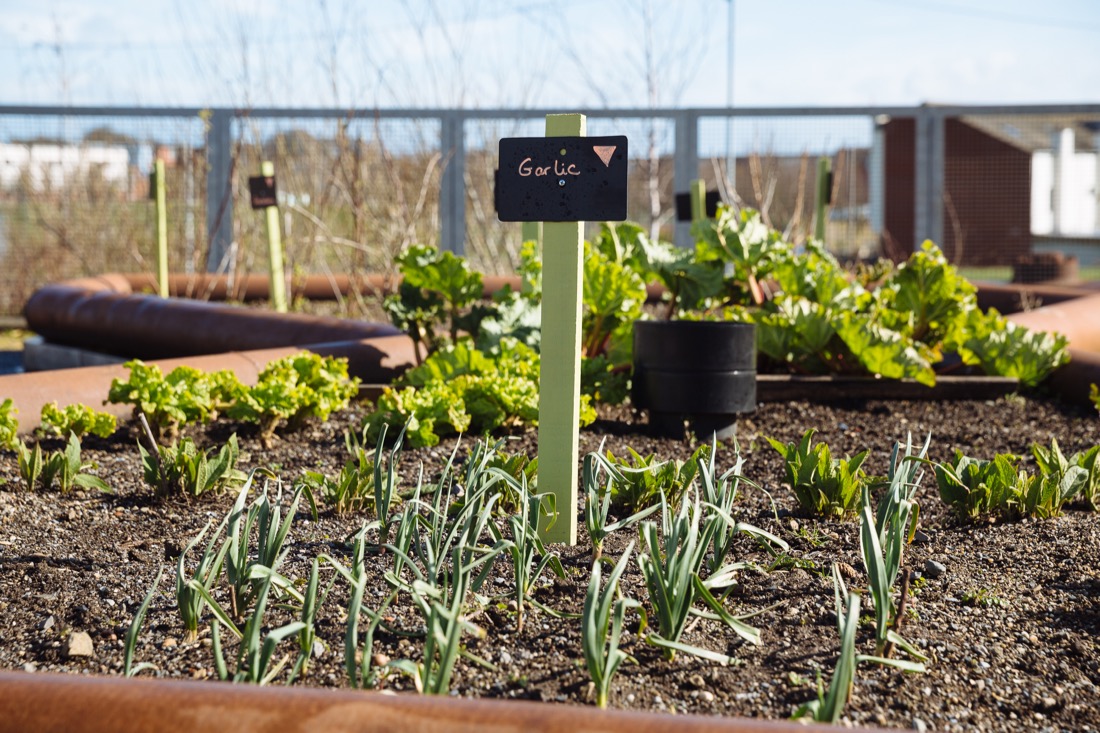 “Deep down, everyone loves gardening,” he tells me. “They just don’t know it yet. As a kid, I remember my teacher bringing in Frey Bento aluminium trays, planting seeds in them. Behold! Marigolds. Hook, line and sinker. I was a market trader for thirty years, but as soon as I stopped, I was totally addicted to gardening. Everybody’s got it in them. They just need a little coaxing. Grow a sunflower from start to finish. Grow something.”

The Muck and Magic Garden is located in Ballymun, (beside St. Pappins Church) and open Monday and Wednesday from 10.30am to 1pm and Wednesday evening from 6pm to 7.30pm.

Further information on the City Farm can be found at dublincityfarm.ie