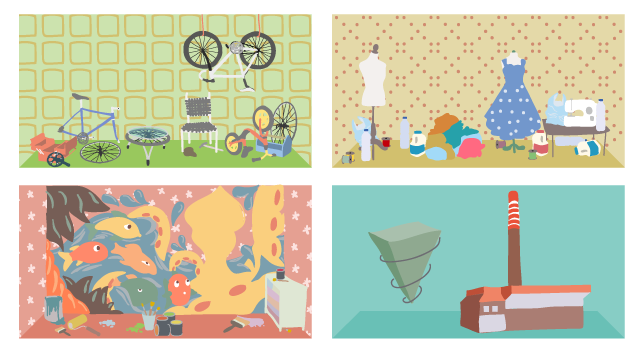 It just escapes the shadow of the last remaining towers. Not quite where you might expect to find a burgeoning eco-fashion brand, but then again Rediscover is part of Ballymun’s changing persona, an area which is becoming something of a hub for all kinds of innovative design and retail. And that’s without paying any mind to the well-spruced Scandies that have moved in next door.

Once rolling farmland and then a collective high-rise for social problems, Ballymun was the beginning of the urban sprawl; a heroic attempt to accommodate people from the decaying inner city tenements into spacious dwellings that you’d be hard pushed to find in the capital today. In the late 1960s seven towers named, perhaps auspiciously, after the leaders of the 1916 rising sprung up in what was then the untouched hinterland of Dublin city. Accompanying them was The Boiler House, the largest suburban heating system in the British Isles, and the neighbourhood’s own supplier of central-heating and water.

Over the years the area would take on a number of colloquial terms (‘the mun’ and ‘Ballyer’), each year moving a little further away from the ideal that it had set out to be. The Ballymun flats, grey monoliths consisting of families living on top of each other and probably not what the likes of Padraig Pearse and James Connolly had envisioned for a free Ireland, but there you go.

Iconic and infamous in equal measure, the grim blocks of concrete and asbestos struck an imposing stare across the skyline of North Dublin. In the years that followed the construction of the state-of-the-art cloud busters, the fifteen story flats became synonymous with everything that was wrong with urban planning and certainly a far cry from ecological design. It was high-density housing at its most dense.

The much talked about modern facilities complete with elevators and under-floor heating was rapidly replaced by the well documented squalor of the stairwells. It’s probably for that precise reason that they have been etched in popular culture through art, music and film.

However, by 2004 no amount of snarling at the camera or romanticising of Dublin’s grimy past could save the problem development, and over the course of four years the buildings were hauled down almost as fast as they had been erected. Joseph Plunkett and the remaining few will have their day soon. We’ll probably miss them when they’re gone.

A new image of Ballymun replaces them; one that combines the community spirit, wit and creativity that has always been there.

The Rediscovery Centre has been a major part of this renaissance. Since its establishment in 2006 the centre has more-or-less been honing its craft in sustainable design; mixing broken with old materials, the tattered with worn, and adding a splash of colour (Recycled colour, too).

It is the origin of the Rediscover brand; the catchall name for repurposed furniture, upcycled cycles, as well as the recycled fashion that is sold at the Ecostore and in a variety of boutiques dotted around town. It could even be seen as a metaphor for Ballymun itself, with some of the designers beginning their projects in the flats and subsequently moving out into the open to purpose built studios.

Rediscover Fashion is one such project. The clothing-line’s designers, led by Carrie Ann Moran, once managed the trundle of sewing machines amid the chaotic environment of a now demolished flat complex. It’s a time that the group have fond memories of, however the label has kicked on in a big way since then. Today they work in a much more vibrant setting and the heaps of patterned cloth leaping from the shelves suggest that chaos still exists in some capacity.

All the materials used in the Rediscover clothing range are made from fabrics donated to the Rediscovery Centre. It’s an effort to rethink how we discard unwanted materials, creating inimitable bespoke outfits in the process. Available from the centre’s Ecostore, the designs have recently caught the eye of retailers in the city and can now be found in the likes of Atelier 27 on Drury St. and the Georges Street Designist outlet. Moran also points to a more personalised direction the label is taking. “Customers can actually come into us with one of our designs in mind, pick out the fabric and we’ll make it to their size. It’s individual and it will fit perfectly as well,” she says.

A hybrid oak sideboard with Georgian and Jacobean features, and a coffee table made from the spokes of a bicycle wheel. Just some of what’s on display at the workshop on the Shangan Road. The experienced and trainee artisans that ply their trade here take an experimental approach to design. So, not a flat-pack or miniature Allen key to be found I’m afraid.

For many pieces the group try to mix things up using an array of discarded materials but restoring furniture to its former glory is just as important, explains Gerard Griffin. A relatively new addition to the green initiative himself, Griffin has involved himself throughout the furniture production, even organising the recycling of unwanted paint. For a small fee people can subscribe to the Rediscover Paint scheme where they can avail of some freshly mixed, sieved and cleaned emulsions. Good for your walls and better than adding to the tins already clogging up the nation’s landfills.

The Estuary Recycling Centre is where Paul Callan sifts through a treasure trove of scrapped bicycles. Don’t want them? He’ll take them. He remakes them into functioning and colourful members of the cycling community. With a team of mechanics and graffiti artists on board, the Rediscover Cycling workshop is all about getting bicycles back out on the road and in some cases elevating former skip-fodder to works of art. A Phil McCoy hand painted bicycle is at the moment being considered for display in the Wood Quay Venue in town.

“There are a lot of people who don’t repair stuff, they just replace them,” says Callan, “for me, just because a bicycle might not be top of the range, doesn’t make it useless. The work that ourselves and the artists do is to try and show that. As long as people are willing to drop into us, we’ll make and repair bikes.”

The landscape of Ballymun is now, well, a lot less vertical and the retired Boiler House chimney no longer competes against the tower blocks. Not content with finding worth in other people’s rubbish, the Rediscovery Centre plan to go a step further and reuse this old landmark. Today it doesn’t have much use other than to remind people that there was a time when Ballymun was blazing a trail of efficiency. If the Rediscover folks get their way there’s a chance it might be part of a new environmental era.