From The Archives: In the Dressing Room With Póg Mo Goal 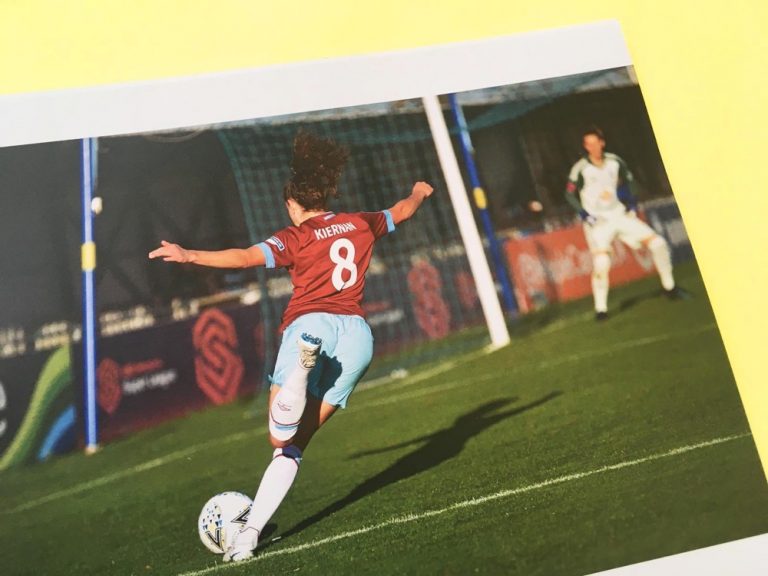 As Póg Mo Goal knock it out of the park with Issue Six, we look back on our dressing room chat in pre-covid times with editors James Carew, Kie Carew and Edd Norval.

Póg Mo Goal is a fantastic homegrown take on the world of soccer. We sat down in their dressing room with editors James Carew, Kie Carew and Edd Norval as they take to the pitch with their fifth issue.

“Football operates as primal scream therapy for a disillusioned contingent of society.”

You’ve just published issue five of Póg Mo Goal. Can you tell us the backstory and story to date of the magazine?

Póg Mo Goal started out as a somewhat irreverent website focused on the Irish national team. But it evolved over time into something where we decided to indulge our passions and make something of substance and quality. We have backgrounds in art, graphic design, advertising and sports media and the natural step seemed to be producing a print issue. We were inspired by the likes of The Blizzard, Howler, and Mundial but also the fact that there was nothing coming out of Ireland. We started producing issues in newsprint format and the response was phenomenal, allowing us to give a platform to Irish writers and artists and at the same time, reach out to contributors around the globe who’ve worked with some of the biggest brands and who, when they saw we were Irish, were thrilled to be involved. Now on our fifth issue, the magazine has always been about design as much as content, something that looks as good as the writing inside.

You’ve changed format and paper quality for the new issue. What led to this?

While we loved the newsprint and the design opportunities the size and format presented, we always wanted to move to something more collectable like a coffee table book or something you’d be happy to keep on the bookshelf.

We’re intrigued by the design decision to turn the contents page into the cover – what is the thinking behind it? 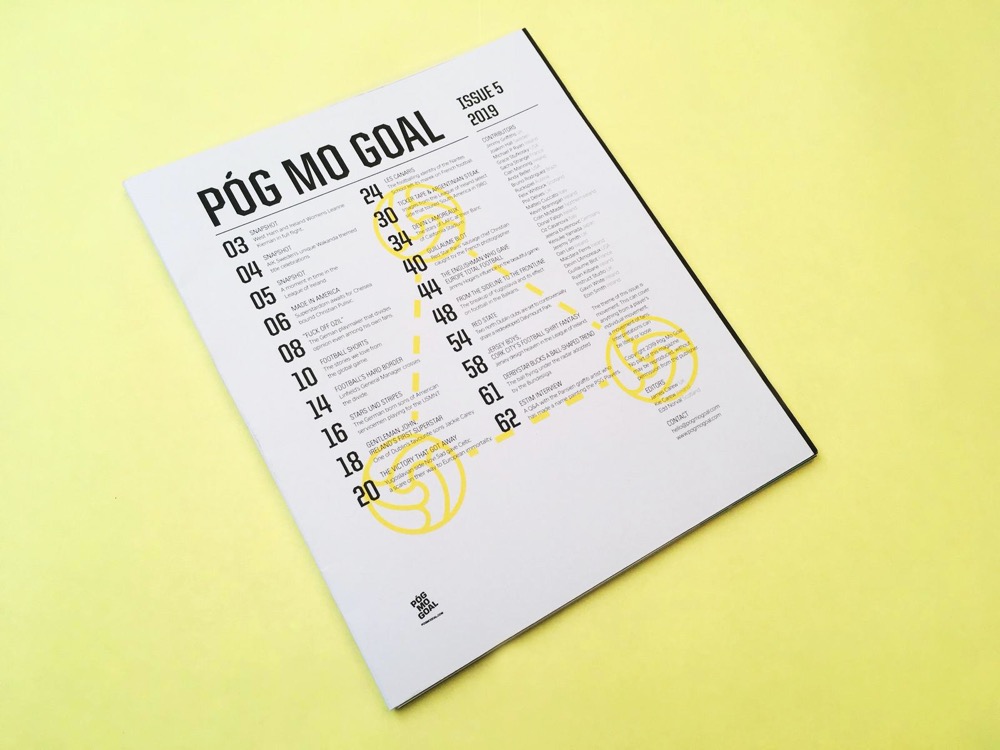 We wanted to have one graphic element on each cover that would stay the same on each issue and not be reliant on a cover star to push sales. After Issue One, we realised we could put the contents below the fold line as this was in effect wasted space, and as it was, our logo was getting chopped in half during the process of stocking the newspaper on shelves in our stockists. So, for Issue Two, we moved the contents to the front cover and it’s kind of become the signature now, that we feel isn’t just a gimmick, but has developed naturally to serve a purpose.

How do you source contributors? What is your submissions process?

Over the years, we have done a series where we asked designers from all over the world to produce a match day poster for Republic of Ireland games culminating in an exhibition as part of Offset. Through the previous issues and this poster collection, we’ve built up a network of like-minded independent illustrators, designers and writers who believe in what we are doing. Other times, we just contact people we admire and see how that goes. We never want the magazine to look better than it reads or vice versa. The quality of writing is as important to us as the design and we feel like some magazines seem to neglect the writing and it’s almost an afterthought of the magazine’s design process.

We’ve featured a few sports magazines in Magnified over the last 12 months, namely Racquet and Glory, there seems to be obvious parallels in your approach to theirs – namely, a deep dive into more tangential aspects of the sport in question, coupled with quality design, photographic and illustrative considerations. Does this invariably lead you down the path to being niche? Is there any prospect of long-term commercial viability and, if so, who inspires you in that field – or is it a proverbial labour of love?

It’s definitely a labour of love, but with each issue we try to step up the outcomes. We’re always trying to tweak and evolve the design. I don’t think that a deep dive into sport or football needs to be niche, but it can be, depending on many other factors besides the magazine itself. The appetite for this type of magazine proves that people want to explore ideas in more depth, rather than what people assumed football fans wanted – tits and football.

Having watched Asif Kapadia’s documentary on Maradona recently, we were drawn to the parallels between the abuse and taunts Napoli fans endured and your feature on Yugoslavian soccer which mirrored the spiral of ethnic and religious tensions. The terrace has often acted as a microcosm in which societal tensions and fractious relations are amplified, predominantly by heterosexual men. Has this changed in anyway, do you think, or is it just lying dormant?

Football operates as primal scream therapy for a disillusioned contingent of society that, as part of a larger issue, is forgetting what it means to be human; losing connection; watching communities fracture and finding companionship in a post-nuclear family world. In football, you are naked to the sensations of your team’s performance on the field. It’s the last honest place. The last holy ground that hasn’t forsaken us.

As such, it’s a perfect sociological forum that hints to larger and more widespread sentiments – a lot of which is political, overtly or otherwise. Football is a game for everyone, a utopia that we create, where our actions have significant reactions. The world outside the stadia is like an alien planet at times, ruled by those who are out of touch with the everyday person. If you want to learn about humans, go to a football match and watch the crowd. If a people-led movement is brewing, you’ll hear about it there first.

Can you talk about the current state of the League of Ireland? We were reminded of Wimbledon proposing a move here in the mid-’90s in an article. Is there hope for greater success for clubs here or is it destined to perpetually play second fiddle to the clout and draw of teams across the water? What one innovation would help?

Every league in the world plays second fiddle to the clout and draw of teams in the English Premier League. The League of Ireland can’t compete with a league that sells TV rights for £5bn for three years. The League of Ireland will always appeal to people who like attending live football and its accompanying experience. Not all football fans in Ireland equate being a football fan to being fan of live football though. What the League of Ireland and lower league football in England and other countries offer is a real experience. That can’t be replicated through a TV at home or in a bar. The league itself, whilst being an exhilarating part of Irish society, sadly mirrors the hierarchical and entrenched incompetence of the ruling political class in its leadership.

Who do you support? Who is the most gifted soccer player in the world right now?

We support our local teams. In Dublin, London and Edinburgh. Danny Mandroiu.

What websites, podcasts, magazines, voices should we be checking out regarding soccer?

There are loads of top-quality independent football magazines out at the moment which is great. It’s a true renaissance moment for intelligent writing and thought in the game, but also printed press as a whole. In particular, the one that inspired us to make ours was the Green Soccer Journal. Unfortunately, they’ve stopped producing them but if you can get your hands on a copy online then you won’t be disappointed.