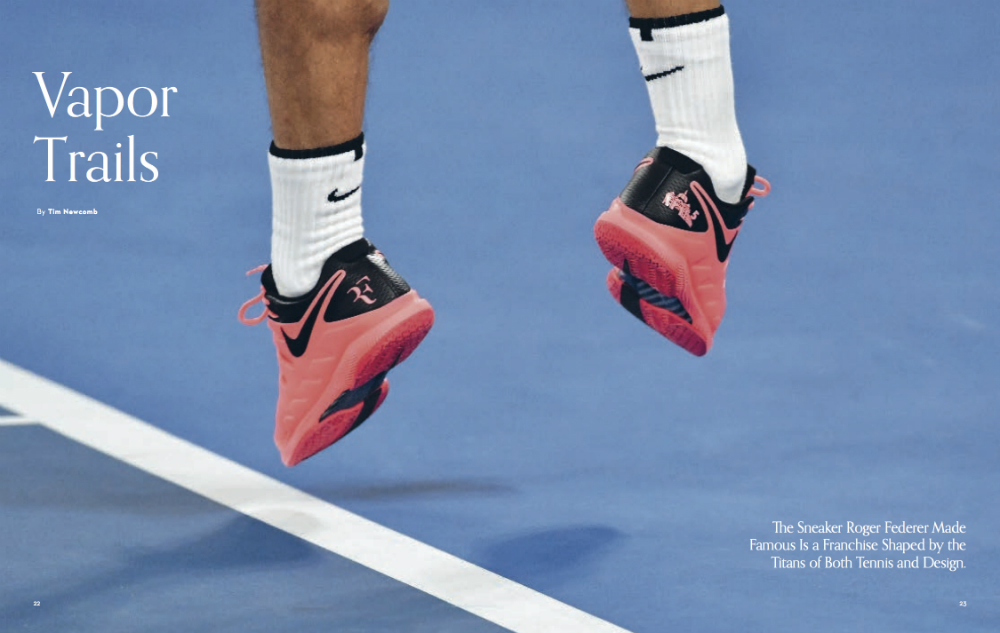 Racquet Magazine is a quarterly about tennis which celebrates the sport through unique stories, photography and illustration. We go courtside with its co-founder Caitlin Thompson.

“We feel like we have a lot of leeway to present the sport in a drastically different way.”

Can you give us some background about yourself and Dave Shaftel (your co-founder and editor) and what led you to setting up Racquet?

My co-founder David Shaftel and I are lifelong players and fans, and we’re both journalists who felt the sport was underserved in traditional media, particularly in the US. Racquet is meant to bring the sport back into a larger cultural conversation, since tennis is such a compelling global game that has both graceful and pugilistic elements. We’re both big travellers and fans of literature, so those are themes we lean into. And because we are drawing excellent writers, photographers and illustrators into our world to help expose more people to the larger meaning of the game, we feel like we have a lot of leeway to present the sport in a drastically different way. We’re passionate about tackling the access issue — both by changing the narrative that tennis is a sport only for elites, and by commissioning stories that don’t depend on professional athletes or organising bodies to say something interesting. We’re particularly interested in sharing viewpoints by women and people of colour, since those voices are especially underrepresented in sports media.

You used a Kickstarter campaign to raise $55,059 towards the first issue back in 2016. How significant was this and how easy/difficult has it been to sustain a viable paid-for model since then?

We feel like raising that amount of money was significant in that it paid for printing the first issue and allowed us to start creating the second — we had bootstrapped the funding for the material that went into Issue No. 1 ourselves. But more than allowing us to fund our beginnings, the process allowed us to sell subscriptions ahead of time, which is the bread and butter of how we sustain ourselves financially. We do some ancillary work — like creative campaigns and strategy for other brands — but the main value of our company is based on our direct relationship with our audience: buying our magazines, listening to our podcasts, coming to our live events.

Have you had any surprising endorsements from the world of tennis? Have you tried to get them into the hands of professionals?

We have, in fact, despite us not looking for it! Since our magazine’s approach is to disrupt and expand the current tennis conversation — we don’t like to replicate the same kind of access journalism that we think is so boring and problematic in the way that a lot of sports media does. And since we’re not tied to access to athletes in order to tell the kinds of stories we find so interesting, things can bubble up very organically. We have a touring WTA professional, Andrea Petkovic, as one of our frequent contributors — she’s now written two pieces for us and has a few more in the pipeline, and we are launching the Racquet Magazine Podcast with Rennae Stubbs later this Spring, which will have us interviewing luminaries of the game, Racquet journalists and contributors and friends who are in the larger cultural conversation — all centered around the kind of storytelling for which we’ve become known.

Racquet has expanded beyond the staple of tennis also. I read a recent article about the Maravilla Handball Court in LA which, of course, traced its origins back to Ireland. How has expanding its remit been received?

In the interest of expanding our world in as many ways as possible, we do one non-tennis story per issue. In our Issue No. 4 about the Maravilla Handball Court, Racquet contributor Carlin Wing illustrated this beautifully with her craftwork. In many cases, these stories are among our most popular and they tend to take us to the most interesting and picturesque places around the world — jai alai in Tijuana, Maravilla in East LA and Ireland, along the way, as well as Real Tennis and its connection to Medieval France.

You’ve taken an imaginative approach to the sport such as a photo essay on socks in the International Tennis Hall of Fame in Newport, Rhode Island. Another feature explored tennis in Lolita. What is the commissioning process for these?

It works both ways — we’re constantly being approached by amazing writers, illustrators, designers, photographers about contributing, so we often have our pick of great pitches. On the other hand, we’re constantly coming up with new ideas that can only come into fruition by connecting our worlds in a way that kind of only makes sense to David and I until its out in the world. In the case of Lolita, I’d seen Joan LeMay’s portrait work and fell in love with it and was suggesting to David we try to make something work with her — and having her illustrate an otherwise visually staid piece about David Foster Wallace in our first issue and then Vladimir Nabokov for our third was such a great fit. In the case of Leanne Shapton, who illustrated the Hall of Fame socks, he’d known her work well and came across the socks themselves on trip up to Newport and came up with the concept and made it happen. These are the absolute best parts about making this magazine: creating collisions and collaborations that would otherwise not come into being.

Are there any other sports magazines out there that you feel have a kindred spirit to yours?

Absolutely, a lot — our first inspiration was Howler, the American soccer publication that was trying to do what we are with tennis (but with many, many more competitors). We also love the sensibility of Victory Journal as well as Rapha and Rouler in the cycling space.

Who are your all-time top three favourite tennis players? Any predictions for Wimbledon? 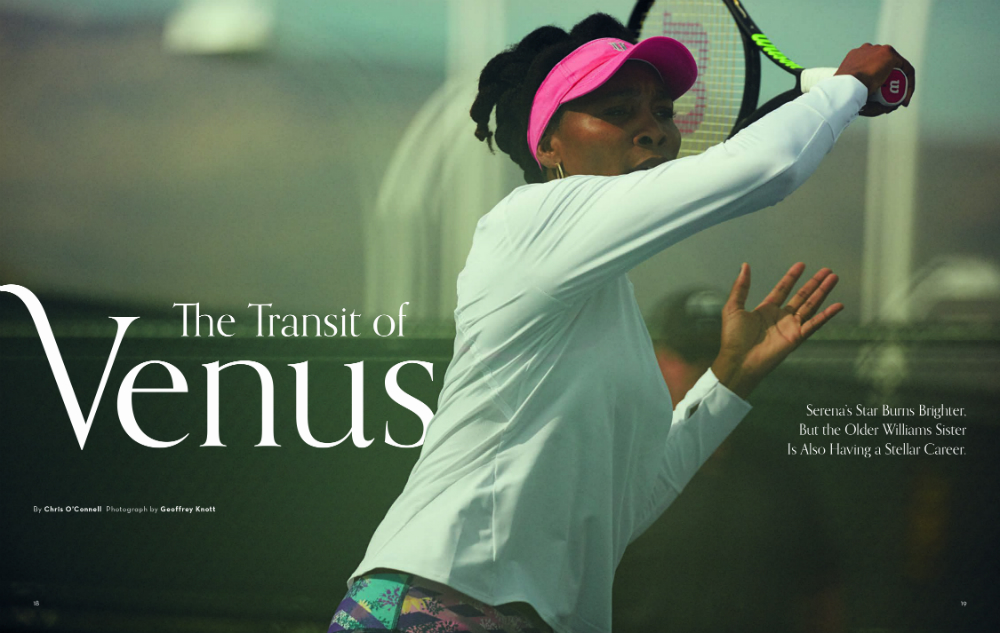 David and I are fanatical fans of the ’70s and ’80s swashbucklers: Gabriella Sabatini, Yannick Noah —which is why we put him on our cover. The first night we met we watched a house-favorite Justine Henin take out Serena Williams at the US Open at a late night session on Arthur Ashe Stadium, so a lot of these types of all court, stylistic players tend to make frequent appearances in our pages and on our social channels. We also both like hangdogs with complex mental states such as Andy Murray, Benoit Paire and fearless newcomers like Namoi Osaka who can play brilliantly on the biggest stages. In terms of Wimbledon, it’s hard not to like Roger’s chances on the mens’ side — he’s just been so dominant and he’ll be well-rested coming out of the clay season. On the women’s side, we’re perennial fans of Venus Williams — her coming so close last year was very exciting at Racquet HQ.

Your covers are stunning. What makes for a great one?

We first think in terms of mood and colour — what are we trying to communicate in terms of the season, the corresponding major events that might be happening and of course the time of year, whether it feels nostalgic, as many times in Fall do, or imbued with a sense of renewal, which is what inspired our current cover. From there, we tend to hone in on things like medium: is this a photograph, an illustration or in the case of our third cover, an original commissioned clay bust of Maria Sharapova executed by Wilfrid Wood. It’s always a process. 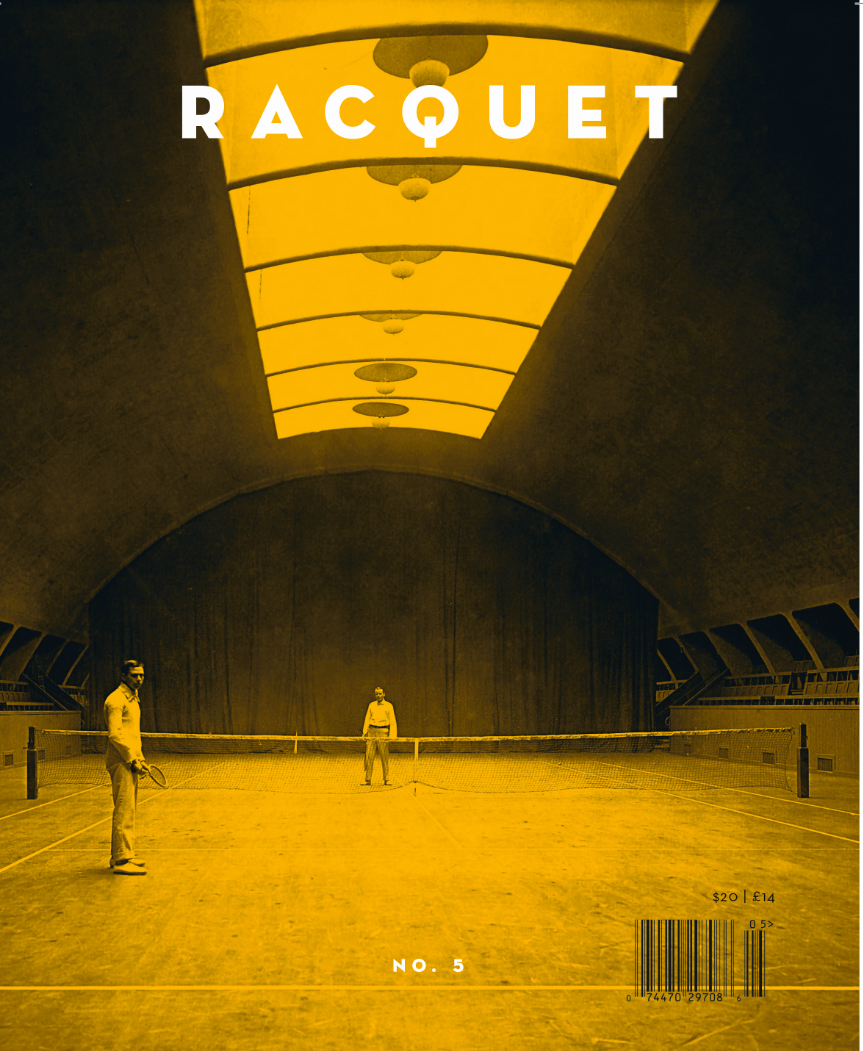 What next for Racquet?

We’re launching a podcast, developing documentary television and film content as well as expanding the kind of work we do for partners based on what we’ve learned as a self-sustaining media business in a very tumultuous climate.