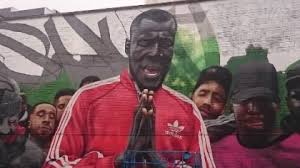 The local art collective have been issued with an official warning notice to remove their iconic Stormzy mural in Haymarket, Smithfield.

It appeared suddenly on a morning in late March, transforming an unassuming cobbled street into a stage for independent art. Now the mural that captured the public’s imagination and launched the art collective Subset is under threat of removal by Dublin City Council.

Commuters passing through Haymarket on their way into Smithfield Square yesterday morning were greeted by a dramatic alteration to the Stormzy mural that has become such an iconic focal point in the area over the past nine months. The lower section of the mural’s depiction of the popular London rapper had been painted over in grey. Set against this new dull background was a stencil of a high-vized council worker with a paint roller aimed up towards what now remains of the original image.

Speaking to Totally Dublin, a spokesperson for Subset described this partial erasure of the mural as a visual ‘protest’ against Dublin City Council. The council have issued a warning notice to the collective, stating that the mural must be removed by December 15th as it was originally erected without planning permission. “It’s just too costly for us at the moment,” Subset said in relation to the expense involved in applying for a planning permit. “We also feel there is no point in plugging the sinking ship, that is our relationship with DCC, as a temporary fix.” Neither Subset nor the council have as yet confirmed the actual cost involved in the application process. 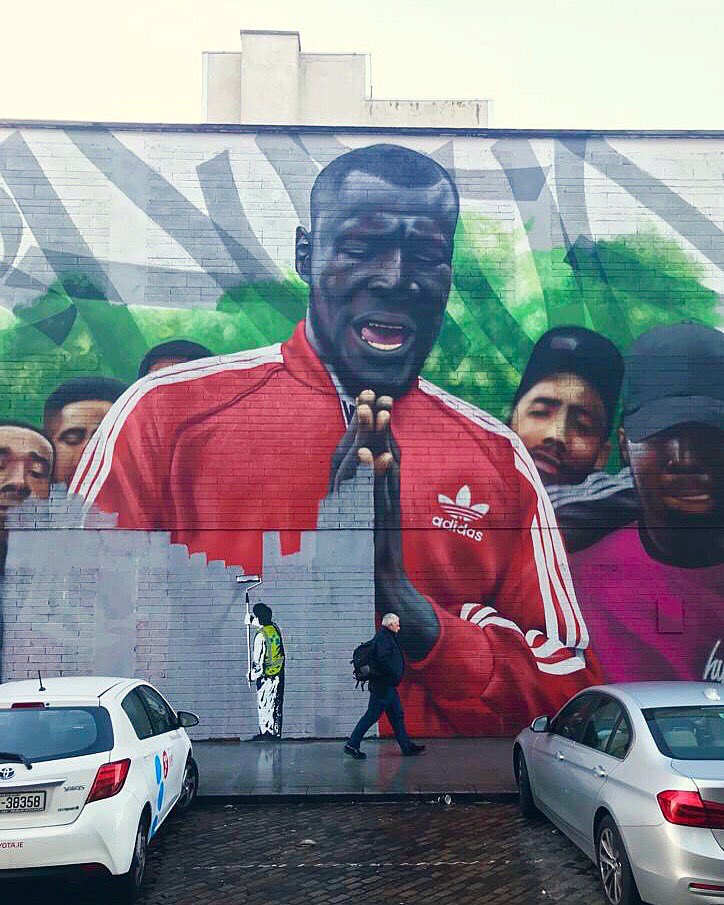 Last night Subset took down another one of their murals in city, painted on the gable end wall of 38 Castlewood Avenue in Rathmines. Entitled ‘Gracie’, the mural was a portrait of a young woman strikingly coloured in pink and red. Subset’s decision to remove the piece came after they were issued with an additional warning letter by the council, which the collective subsequently posted on their twitter account. The letter stated: “It has come to the attention of Dublin City Council, the Planning Authority, that unauthorised development may have been, is being or may be carried out at 38 Castlewood Avenue.” The premises is included in the council’s record of protected structures and the letter warned that the mural must be taken down as it was also erected without planning permission.

Subset have confirmed their intentions of removing the Stormzy mural by December 15th, a forced action they regard as ‘bad news’ for the promotion of independent street art in Dublin. Local property owners and businesses in the area have similarly greeted the news with dismay. The mural is painted on the building wall of Linders of Smithfield in Haymarket. Jonathan Melvin, the property manager for the building, has voiced his personal dissatisfaction at the prospect of the mural’s imminent removal. “It’s a massive shame for the mural to come down, it brightened up an otherwise dull street,” he said. Melvin also confirmed to Totally Dublin that he had no issue with the mural remaining on his premises.

“We also feel there is no point in plugging the sinking ship, that is our relationship with DCC, as a temporary fix.”

For Sophie Bradley at Proper Order Coffee Co., a bustling little coffee shop located next to the mural wall at 7 Haymarket, Subset’s art has brought a cultural vibrancy to the area that has been good for business. “It has really brightened up the area and everybody loves it, people come from everywhere to see it and take photos,” she said. For Sophie, the thought of the mural having to come down is ‘very upsetting.’ “It’s great to see such a huge mural of a young black man up in Dublin,’ she continued, you just don’t see that here normally.”

Subset’s conflict with Dublin City Council is the latest in a series of high profile mural controversies in Dublin over the past two years. In July 2016, the Project Arts Centre was forced to remove the ‘Repeal the 8th’ mural that had been painted on the front of their building as they were controversially deemed to be in breach of official planning laws. The piece was created by well-known Irish street artist Maser and referred to the campaign to repeal the Eighth Amendment of the Constitution, that acknowledges the right to life of the unborn.

In April 2015, meanwhile, street artist Joe Caslin’s large-scale mural printed on the gable end of a building at the corner of Dame Street and Georges Street, ‘The Claddagh Embrace,’ became a heated focal point in the lead up to the May same-sex marriage referendum. The image depicted two males in an intimate, anxious embrace and became a defining symbol of the pro-marriage equality campaign. Caslin was issued a warning notice by the council stating that his mural had violated the city’s planning regulations. Following this action, more than 15,000 people signed a petition calling to save the mural. However, ‘The Claddagh Embrace’ was not preserved and gradually began to disintegrate in the weeks following its creation.

As with these earlier public art works, Subset’s portrait of Stormzy attracted widespread media attention following its sudden appearance on March 27th of this year. The mural was created to coincide with the London rapper’s concert in the Olympia Theatre, with Stormzy himself expressing his admiration for the piece and even visiting Haymarket himself following the show. “It was sweet to see that scale of the cultural appreciation”, Subset said of this period, describing how “the recognition was fuel to our vision.”

Subset’s evolving vision as a multidisciplinary art collective has been impressively realised over the past nine months through a range of commissioned projects across the city. “We are creating a globally recognised platform for the expression of Irish culture,” they said. The enduring popularity of their Stormzy mural is a testament to its vivid portrayal of an artist in the full-flow of performance. While the collective have expressed their desire to “sit down and find a resolution” with Dublin City Council to save the mural, they have conceded that this prospect now remains unlikely.