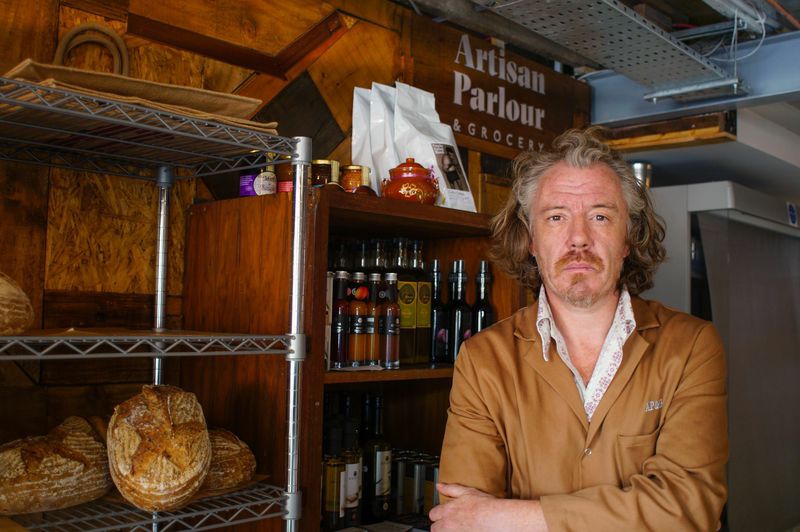 Combine a groovy grocer in a shop coat, an awe-inspiring soundtrack and the best Irish and Iberian produce you can find.  Add a commitment to great service, a generous measure of nostalgia and a hat-tip to Boland’s Mills. Sprinkle liberally with a dash of garrulous genius. Sit back, savour and enjoy Artisan Parlour and Grocery, the delightful new addition to Dublin’s artisan food scene.

Conceived by the enterprising Martin Thomas and Venetia Quick, AP&G is in essence an old-school food hall grocery and deli, but even at this early stage it carries the promise of something really special. Located in Ringsend there’s an unvarnished loveliness to it, reminiscent of old Mediterranean tavernas serving up generous dollops of sunshine and wistful days in Ireland nurturing optimistic dreams of better days ahead. 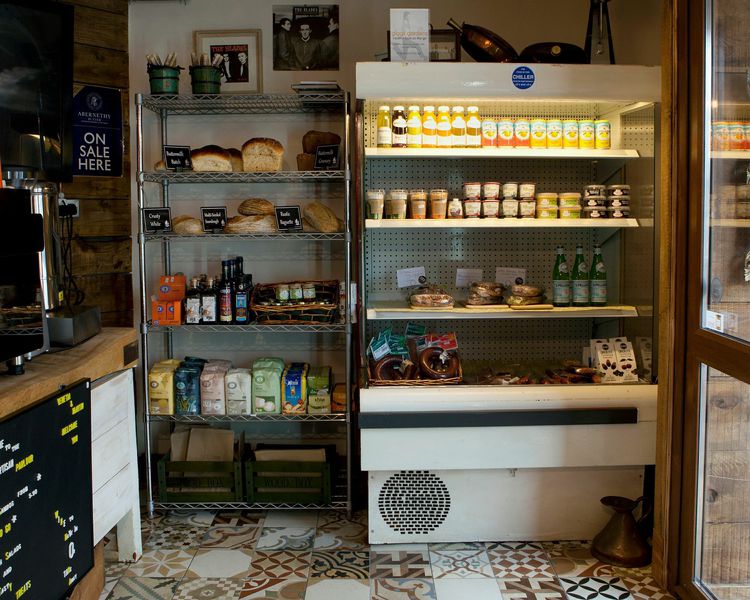 First impressions are disconcertingly reassuring. Sinead O’Connor provides the backing track as we step across the threshold and find ourselves mesmerized by the old tiled floor and selection of wares for sale in the grocery section at the front. The eye-catching display includes items such as loaves of sour dough and rye from Firehouse Bakery, Iberian black pudding, Abernethy butter, Irish free-range eggs and olive oil in distinctive 1950’s style canisters.

A quick glance at the menu reveals a selection of familiar, homely fare – healthy granola with fruit and yoghurt, baked beans, French toast and the like. The kind of food you often fancy when you’re out and about, but don’t always see on menus.

Once seated, a more detailed second look uncovers a number of innovative twists we’d missed first time round.  The deceptively simple menu contains more than its fair share of fine ingredients. Agave syrup instead of the usual maple for instance, provides an early hint that homely fare it may be, but on a significantly more imaginative scale than that found in most Irish kitchens. 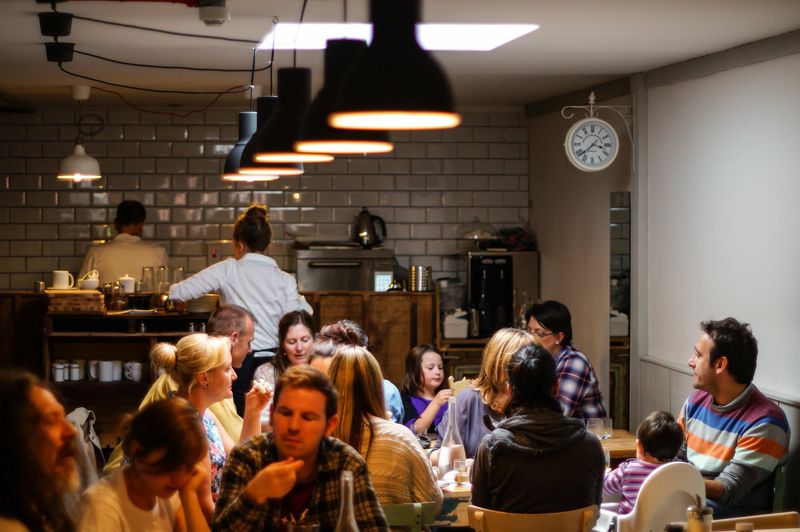 We learn that Agave owes its origins to Mexican cactus and the prospect of trying something new intrigues. I wonder if the French toast can be made on something other than farmhouse white bread.  A brief confab between our waitress and Gina in the kitchen confirms the availability of batch granary and I’m reassured that my request can be accommodated easily enough. That settled, we treat ourselves to a Hobbit style breakfast of French toast with Agave syrup, beans with chorizo and a brace of coffees.

Moments later two generous mugs of piping hot coffee arrive. The first sip reveals a deliciously fresh taste that lingers leisurely on the palate, an act of indulgence repeated with each subsequent mouthful.  Our smiling waitress tells us that the secret to the unexpectedly fresh flavour is down to the skillful, dedicated craftsmanship of artisan supplier Coffee Culture, their practices guaranteeing the beverage’s consistently fresh, pristine nature. The taste is sublime and it’s hard to stop at just one.

Our food is quickly cooked-to-order at a speed matching the uptempo soundtrack, which has now morphed to ‘ History Repeating’ Shirley Bassey’s invigorating 1997 collaboration with the Propellerheads.

My first encounter with what I think is agave syrup proves intensely fruity, evoking memories of late summers in the seventies sampling hedge-fresh blackberries. This trip down memory lane is interrupted by Gina who tells me that I’ve inadvertently been sampling pomegranate essence – amazing on salads but not intended for French toast! It is nonetheless delicious and I make a mental note to come back and try one of her salads at a later stage.

The French Toast is perfectly cooked, the stunning, crispy exterior overlaying a moist eggie centre with strong hints of vanilla. Partnered beautifully by the subtle sweetness of the clear, lightly colored syrup, it is, hands down, the best I’ve tasted in a very long time. 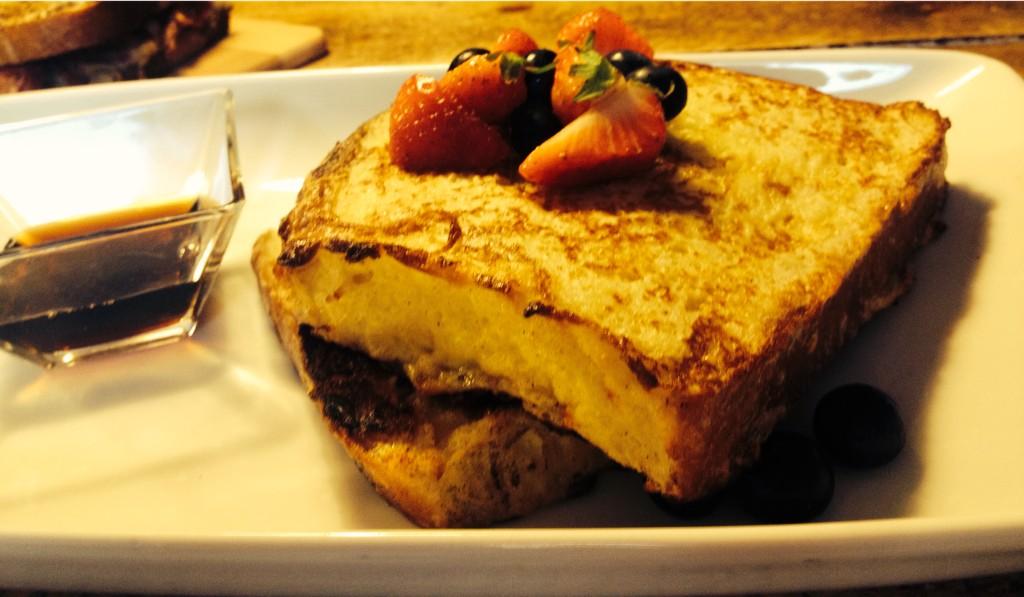 The home cooked beans too are a treat.  Sizzlingly hot, their spicy chunkiness comes enveloped in a chorizo-enriched sauce, which is deftly absorbed by a generous side of toasted Firehouse sourdough. Both dishes succeed in generating a happy sense of wellbeing, which is about as much as you can reasonably hope for from a brunch.

AP&G’s commitment to ensuring a quality customer-centred experience is further confirmed by a visit to the bathroom. Spotlessly clean, the inclusion of individual hand towels adds an unexpected touch of luxury.  The walls are adorned with postcards reprising Martin’s previous incarnation running popular clubs such as Strictly Handbag and Strictly Fish, while hotelier Francis Brennan’s two-word postcard review (“Fucking Great!”) has been framed and takes pride of place in the larger accessible toilet. 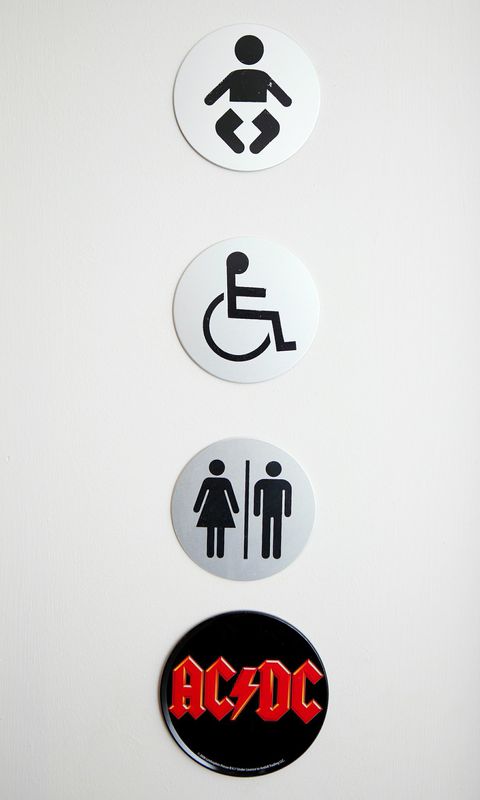 Before leaving we forage through the tempting selection of artisan produce in the Grocery and equip ourselves with the makings of some nice evenings in. We spot a handsome array of freshly made door stoppers-to-go. The hand-cut bread and substantial fillings offer the perfect antidote for ‘ala-desko’ office diners seeking healthy alternatives to mass produced plasticity at lunchtime.

The bill for French toast, beans with chorizo and three coffees comes to €18.50 – staggeringly good value. AP&G’s winning combination of delicious food, close attention to detail and great value for money has successfully elevated a straightforward mid-week brunch beyond our expectations.

As Fat Boy Slim’s ‘Weapon of Choice‘ plays us out the door, we can’t help but hope that what Martin and Venetia have started in Ringsend may yet herald the beginning of a very welcome trend.  Every Dublin neighborhood should have its own Artisan Parlour and Grocery.