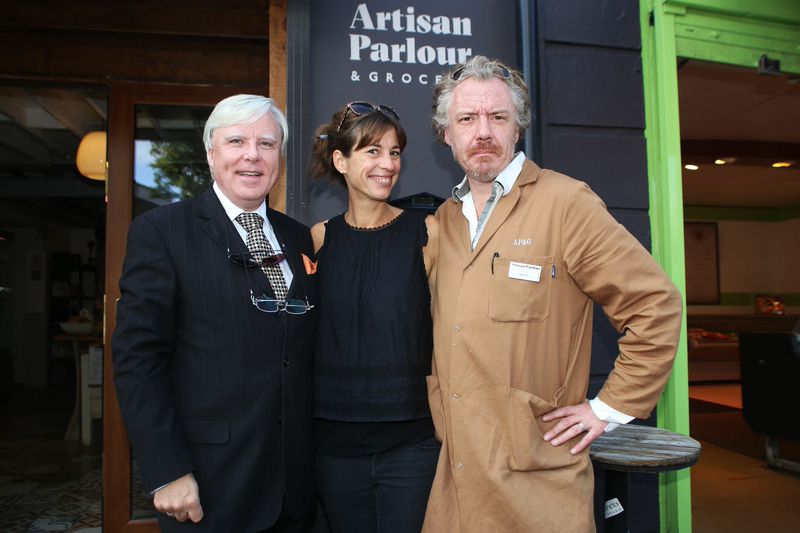 Back in the days before austerity formed an unholy alliance with the long Good Friday, the hallmark of a great night out often involved negotiating Dublin’s dance-floors after the pub closed. It was here that most people first encountered Martin Thomas and his talent for conjuring up good times through the medium of dance.

It all went swimmingly until 2008 when the bankers wrecked the buzz for everyone. Staying in became the new going out, and in the cold light of this new purgatorial world the Drogheda man stepped away from the decks and asked himself the age-old question, ‘What the hell do I do next?’ The universe answered unequivocally: transition from creature of the night to friendly neighbourhood grocer. True story, as he’d say himself. Artisan Parlour & Grocery, his new venture with wife Venetia Quick has been going down a storm since it opened in Ringsend and I recently caught up with the gregarious grocer for a natter.

So tell us about your new venture.

It was born out of an idea that myself and Venetia had a few years ago. It’s an old-school grocery shop like you might have seen in Ireland in the 1950’s but with better music, no pictures of Jesus, the pope, JFK or Michael Collins. Though I actually like Michael Collins and I’m tempted that if I find the right picture of him I would put it up.

The interior reminded me of old pubs in Madrid or Barcelona. What was the inspiration behind it?

Well that’s a very nice compliment because the idea was to make it like it had always been there. I remember as a kid the front of a pub in Mornington which used to be a grocer’s shop. They didn’t sell much, a few bits and bobs. Over time it became more like a corner shop, but originally it would have been a space for local producers to sell their wares.

That was the way the pubs were and that was the concept. Go back and make it feel like you were in not a bar essentially but an old grocer’s shop. Without all the formica, or worse than that, plastic everywhere.

So this is a lifetime of serious food research coming together?

Food is where Ireland’s at on every level, and globally as well there’s a lot of respect for the produce coming out of this country. We wanted to have confidence in the provenance of the food so we did a lot of research. The really good stuff is made by very small family firms, and to be able to support that I’ve a relationship with everybody who supplies me. The guy I get butter off, his wife makes about 20 to 30 kilos a week and it’s fucking astounding! We have great quality bread and stuff from Dingle and Donegal.  The beef and pork comes in from Meath and Louth where the farming is top class.

Tell us about the menu.

The menu was based on things we liked and then it was handed over to Gina, who’s brought a great element of panache to it all. It is home cooking on one level. We present food in the simplest way possible while balancing flavours, and we carry really good produce. Whatever’s in season, in terms of Irish vegetables, will be on the menu. What we’re trying to do is show people that really good quality Irish food doesn’t have to cost that much.

With our new evening menu we’re going to do what a lot of small restaurants in France and Italy do – a couple of very good quality starters and mains. Our wine list is great value, we’ve got a killer Rioja, so good you can taste Spain in your mouth.

Yeah, my parents had a shop in Drogheda and I worked there from the age of seven until I finished college. I remember being involved in the Christmas club in the days when people used to pay off two or three quid a week, when punts were worth something, before huge inflation occurred and you knew who the newsagent was. My Dad had great ability to spot an opportunity and go with it very quickly like for example when videos and the Rubik’s Cube thing happened. He was a great salesman so coming from that kind of an environment helped. Though, all of my family were looking at me going; ‘You’re going back into retail? Well you’re fucking mad” and I said, ‘Well, this is a different animal. It’s in Ringsend, it’s a bit different and I’m not selling crap. It’s good stuff’.

It was very important from the very beginning that we were a community based business, and that was why we choose this location. We have to be somewhere we can be, we’re not going to drop a global brand like Subway into a community just to make money. We employ a lot of local people and have the same ethos as dealing directly with our producers, buying as much as we can locally and making sure the money’s going straight back to them.

What’s been the most satisfying part so far?

Well, we have an awful lot of regulars and that’s fantastic. When Tom Doorley walked in a week after we opened that was quite terrifying. He got what we were trying to do so when his review came out it was great.

If it takes off would you like to develop more parlours?

It’s early days so that won’t be happening any time soon, but I enjoy building brands so if I can find the right model who knows? But it would be up to the banks to fund it. I’ve no money. I spent it all on my hair!

Check out our review of Martin’s new venture here