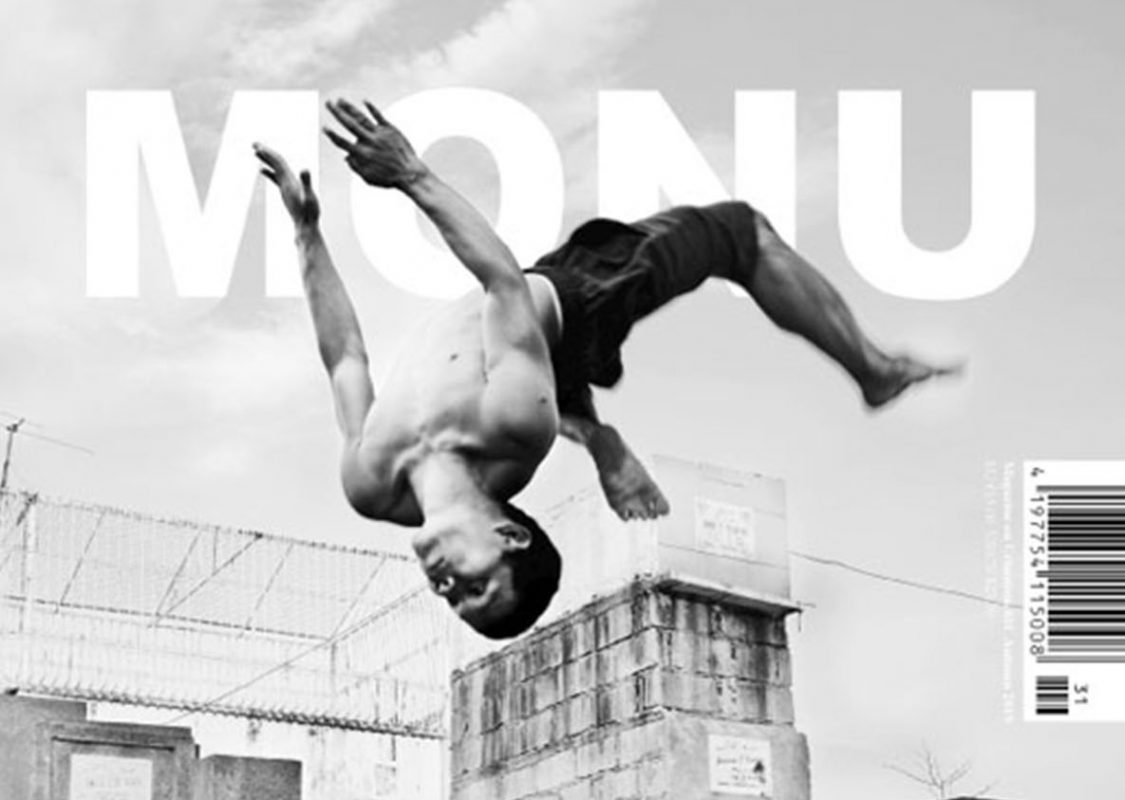 Bernd Upmeyer is a Rotterdam-based German architect and urbanist. He is the founder and the editor-in-chief of MONU, the biannual magazine on urbanism.

MONU (Magazine on Urbanism) was born in 2004 in Rotterdam. Can you tell us about the early days of its existence and how it morphed into being a leading exponent of international thinking on urbanism?

I am happy to hear that you perceive MONU to be a leading exponent of international thinking on urbanism. Although this development of the magazine was never intended as such, because originally it was created as a way to keep in touch with – and to keep working on – urban topics together with some of my former student colleagues from university. It was very much a tool to keep on challenging and stimulating one another intellectually. That is how everything started in 2003, one year after I graduated as an architect. But as we put a lot of energy, enthusiasm, and passion – especially a passion for criticism, provocation, and radical ideas and thought – into the magazine since the beginning, this seemed to have inspired many people to contribute to it and read the magazine almost from its inception. 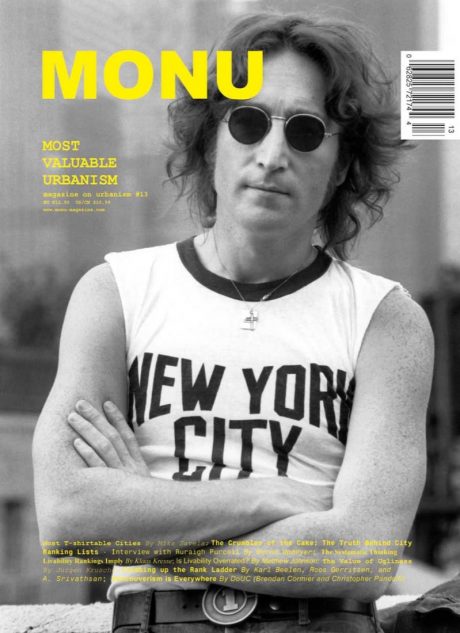 I believe that people appreciate the magazine’s authenticity too and somehow we must have found enough interesting topics, relevant questions, and fascinating contributors over the period. The fact that the magazine was conceived from the beginning – and continues to be today – as a very open platform for diverse ideas and opinions, to which everybody can contribute, probably helped the magazine to thrive too.

The current edition looks at “affordable urbanism” through the prism of a variety of contributors. Was your thinking about the subject matter affected by the submissions you received and commissioned?

Usually the contributions, and especially the interviews that I usually do, to every new MONU issue affect my thinking about each newly chosen subject. That is a great thing, because my own perception is unavoidably limited to a certain extent, as is the perception of everybody, especially as we are diving into new subjects all the time. Therefore, my thinking with regard to the topic of our current MONU issue #32: “Affordable Urbanism”, was affected during the creation of it too. 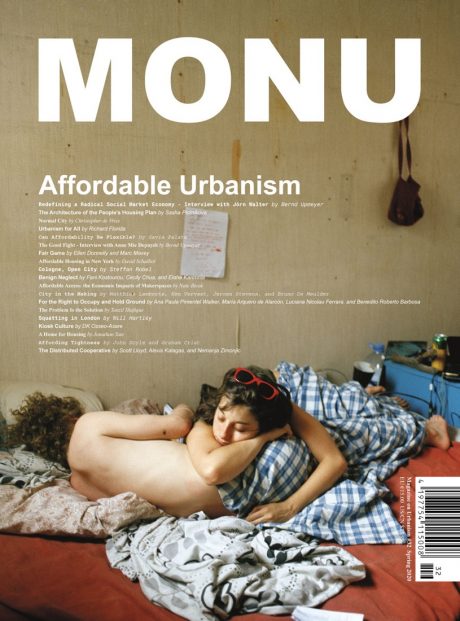 When I created, for example, the open “call for submissions” text for issue #32, at the beginning of November last year, I pointed out some obvious solutions to generate more affordable housing, which are often sought in the construction of more units, the provision of subsidies, or the implementation of rent-controls. However, by that time I was not yet that familiar with the strategy to create more inclusive and affordable cities by allowing people to become only the owner of the bricks and mortar but not of the plot – meaning of the building, but not of the land – referring to countries such as Switzerland, the UK, and the Netherlands, where such a system exists, as was pointed out by Christopher de Vries and Anne Mie Depuydt, two of the contributors to MONU #32.

How will the global pandemic we are currently encountering impact upon our conception of urbanism? What future opportunities and concerns lie ahead as a result of it?

Our upcoming MONU issue #33, entitled “Pandemic Urbanism”, that will be released by the middle of October, is currently investigating such questions. I believe that the current coronavirus pandemic might not have that strong an impact on our conception of urbanism or even re-shape and transform cities as some predict – or hope – especially as I expect that a vaccine will be available very soon. 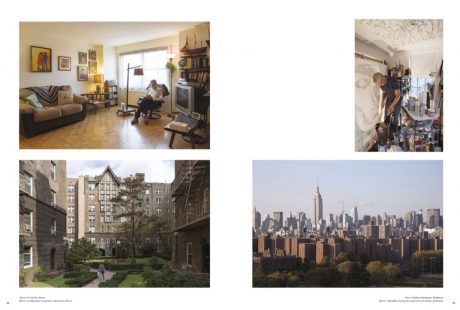 I suppose that most of the urban phenomena – maybe apart from an increased “work from home” culture – that are partly still visible in cities due to the pandemic are merely temporary, such as social interactions from balcony to balcony, the use of streets and parking lots for café terraces, the added shelves in apartment blocks where delivery drivers can leave food and other goods, or the new ways of living and new routines of people particularly in the domestic spaces of our cities, where they intensified their activities when it comes to exercising, cleaning, organising, cooking, baking, TV-watching, online communicating, etc.

Nevertheless, there might be certain long-term impacts of the pandemic that are particularly related to the economic aspects of cities, which is something that Richard Sennett emphasised too, when I spoke to him a couple of days ago in an interview for the “Pandemic Urbanism” issue. The economic aspects will bring both opportunities, as certain industries will continue flourishing, but also concerns, as many industries will remain being troubled, but this remains to be seen.

How will altered work practices impact upon urbanism? How does one balance financial and social resources for best effect?

That people increasingly work from home is one of the few phenomena that, I believe, is going to persist longer to a certain extent, at least for the people that actually have the chance to do so, as many – probably around 40% of the working population, as has been speculated – do not have that opportunity. However, I assume also that many people wish to go back to their offices as soon as they can to profit from easier communication, socialisation with colleagues, stricter daily routines, etc. But I believe that there will be slightly more people working from home after the pandemic than before the pandemic. 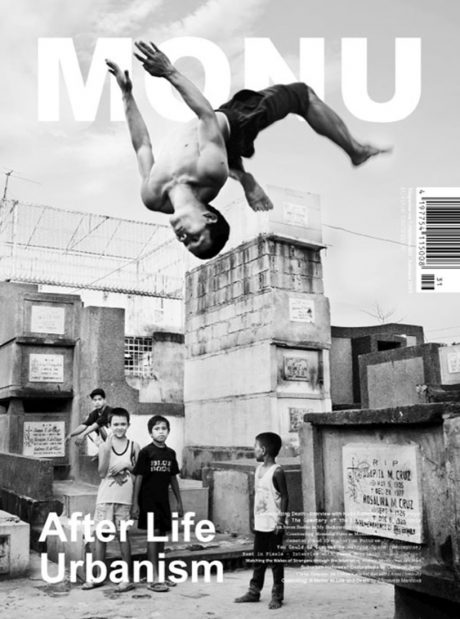 The impact on cities will be most felt in the reduction of commuters and thus in emptier highways, streets, and public transport, which will help combating climate change. Nevertheless, the increasing amount of home deliveries might soften this positive effect. Another impact an increased working from home culture will have on cities is that, as Beatriz Colomina told me recently in another interview for the “Pandemic Urbanism” issue, many office buildings may remain empty and need to be reused, probably with other functions. But how people will balance their financial and social resources is a personal and individual choice that everybody needs to answer for himself.

Is MONU a labour of love? How does it feed into your other work? To what extent does it rely upon advertising, subscriptions, additional support for its survival?

MONU is certainly a labour of love and we constantly have to be careful not to spend too much of our time on it, which is very tempting, but which would very quickly lead to the end of the magazine. This is because since the beginning it has been very difficult for a niche magazine such as MONU to attract advertising, subscriptions, or additional support, and thus a certain number of copies of every issue must be sold to cover the most basic expenses of the magazine, such as printing costs, etc. Thus, every reader, and every copy sold, contributes to the survival of the magazine. 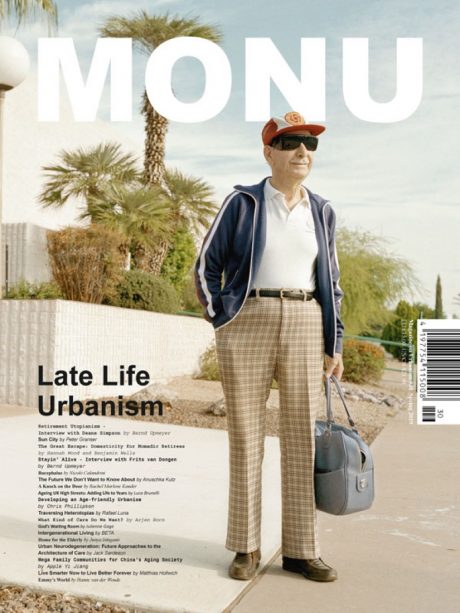 Accordingly, for the survival of the magazine, we have to be very well-organised and work as efficiently as possible and make time for other projects that I do with my office BOARD in Rotterdam, where I work, for example, on architectural and urban projects, but also produce research studies, such as the project we have been working on for the city of Paris, as part of the Atelier International Grand Paris (AIGP), a project that was initiated by the former President of France, Nicolas Sarkozy. In that way a lot of knowledge that I gain through the work with MONU also feeds into my work at BOARD (Bureau of Architecture, Research, and Design), not always directly, but many times indirectly, but a lot of the experiences that I collect with the work at BOARD feed into the magazine too, especially when it comes to the creation of new topics.

Have you any encounters or experiences with urbanism and how it applies to Dublin?

In 2007 I was in Dublin to deliver a competition entry for the design of the New Headquarters for Wexford County Council, in which we reached the last round, together with five other competitors that were selected out of 100 entries. That was, so far, my only encounter and experience with the city of Dublin. I had to spend a night there and stayed in a small hotel in the centre of the city surrounded by many bars that made the streets incredibly lively, something that you might encounter in Rotterdam only in some particular streets and mainly on Friday nights. The centre of Dublin, in general, I experienced as unbelievably full of life, both in the evening and during the day and especially in the morning, where I encountered more people with coffees-to-go in their hands than anywhere else before.

We have recently had a new coalition government formed in Ireland with the Green Party being the glue between two establishment parties. What, in your opinion, are the mistakes Greens make when approaching urbanism and what advise should they heed?

Many countries, especially in the Western World, are trying increasingly to make their cities more environmentally sustainable, which is certainly a great thing. However, more environmentally sustainable buildings or neighbourhoods are usually more expensive to build than less sustainable ones, which challenges therefore the creation of more affordable cities in the future. So, being too idealistic in relation to environmental sustainability can easily lead to a conflict of objectives, a challenge that Jörn Walter, the former Chief Planning Officer of the city of Hamburg, pointed out in an interview entitled “Redefining a Radical Social Market Economy” that was published in our current MONU issue #32 on “Affordable Urbanism”. 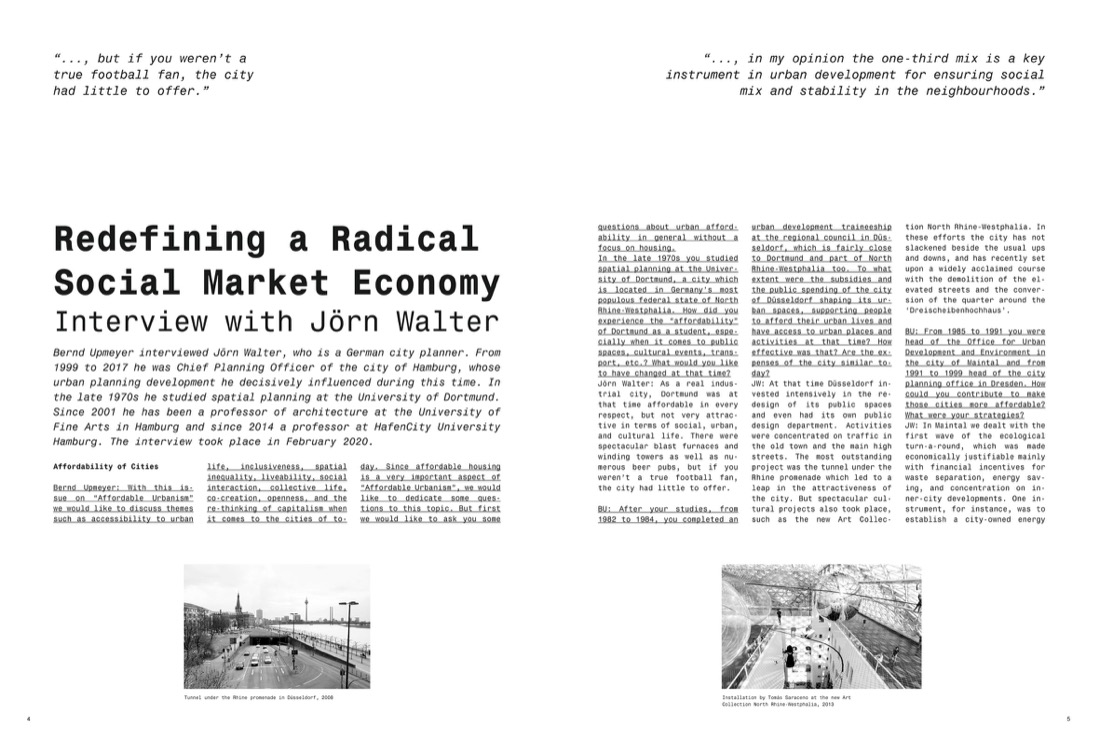 He stressed the fact that cities need to create comprehensive sustainability concepts that take ecological objectives just as seriously as social and economic ones. In one of my urban design projects for the city of Quakenbrück (located close to the Dutch border in Germany) on which I have been working with my office BOARD for over a year, the Greens in the local government demanded, for example, an energy-plus standard for the new neighbourhood, producing more energy from renewable energy sources, over the course of a year, than it imports from external sources. But as this would have endangered the other ideal of the city, namely the creation of an affordable new neighbourhood, we advised to create a flexible energy strategy and to begin the project as a low-energy settlement that can, over time, and step by step, develop flexibly into a passive house settlement, or even, if affordable, partly and selectively into an energy-plus neighbourhood in the future.

Are there any cities that are nailing ‘urbanism’ in your opinion? Any initiatives which have impressed you of late?

I am always impressed when cities or parts of cities manage to reinvent themselves turning problematic, abandoned, or post-industrial neighbourhoods into beautiful and lively places to live and work with a mix of functions and diverse housing typologies for different kinds of people with different available budgets and ways of life. Especially when it comes to the renewal of post-industrial neighbourhoods, although they might not cover all the aforementioned aspects, I appreciate places such as the “HafenCity” in Hamburg – one of the largest recent urban redevelopment projects in Europe by landmass – but also the “Eastern Docklands” in Amsterdam, and Rotterdam’s “Kop van Zuid” and “Katendrecht”, a neighbourhood, famous in the twentieth century as Rotterdam’s red light district with many – shall we say – entertainment options for sailors.