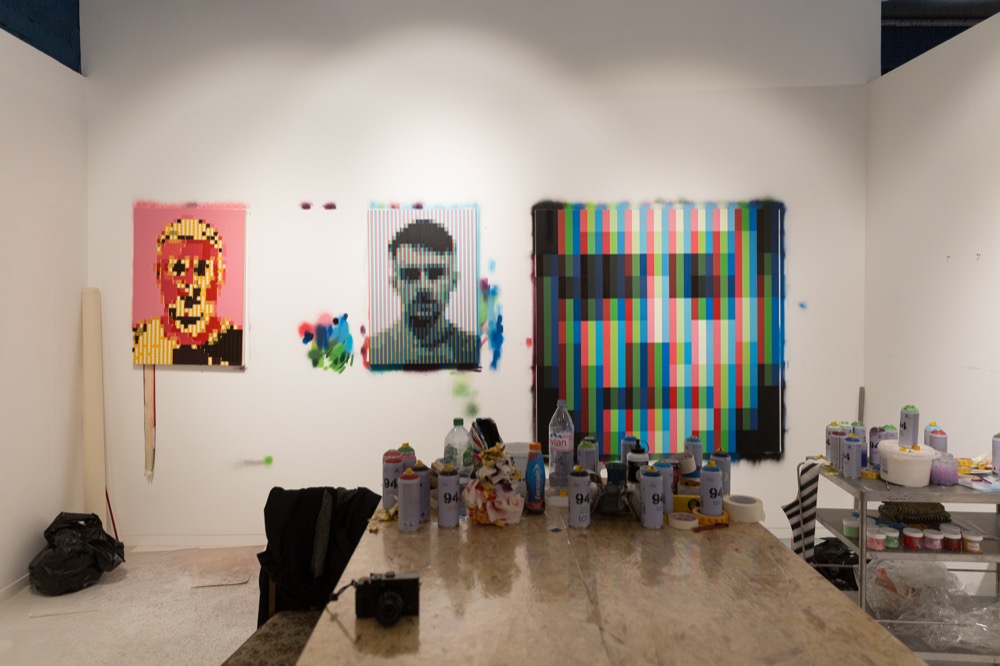 “I wanted to showcase talent that I believe in, people that are brilliant in Ireland”

Counting PhysioCare, Citi Hostels and Centra as its immediate neighbours, Atelier Maser – holding court on Charlemont Street, a few skips from the canal – was always set to make a splash. Apart from a penchant for explosive colour palettes, a staple of its inventive founder, Al Maser, the first thing that strikes you about this studio-meets-gallery-space is its snugness. As a rule, I had always believed Dublin’s creative workspaces were forever deigned to freezing temperatures, but Al has beaten the odds – if not before doing his own penance. “I’ve designed the space so that I’ll stay here enough! It’s important to be cozy, I’ve done my time in some terrible places where you couldn’t wait to go home. The coldest studio I had was in Newmarket Square – it was on the corner, right by a home bird mural. It used to be an abattoir, which I didn’t know at the time: the studio was five feet down from the entrance, no windows, tiled walls with these brown stains and valves that I didn’t think much of back then… it was so grim! Rotten!”

A ground-floor, glass-box structure created amid the Charlemont Street Regeneration Project, the Atelier Maser space could sit comfortably in any given artistic capital, whether Stateside or across the Irish Sea. This only speaks to the wealth of overseas experience Maser has amassed in recent years, his output travelling from Las Vegas, the origins of his temporary “Maser Motel”, to the Milan Expo. By consequence, he has brought home a solid benchmark from which emerging Irish artists can springboard. This was a primary impetus behind Atelier Maser’s creation, but only one of several – as Maser traces the project’s timeline, everything appears to have snowballed organically. “I definitely like to paint, but I like to do loads of other things to keep myself entertained…when I came across this space I knew it was a great opportunity, and asked myself what else I could do with it. I met with Niamh [McCabe, Creative Director of Spacey Studio and Designer of Atelier Maser] to flesh out this idea I had, which was very much a work-in-progress, to set up a gallery space that could double as a studio. As it become more and more multi-functional, as cheesy as it sounds, it was a chance to give back, and be a part of a community that I had definitely stepped away from a little bit. I had been doing a lot of international work with museums and galleries, probably felt a little bit disjointed from that Dublin scene, so I wanted to showcase talent that I believe in, people that are brilliant in Ireland.”

The sheer, physical malleability of Maser’s new build is another strong suit worth noting. As one of the many admirers who descended upon his freshly-minted space in December for “A Stag’s Head”, Atelier Maser’s opening show by Peter Doyle, literal walls have been re-shaped and shifted since then. The pure-white gallery room, visible from the street during the exhibition run, has been turned into a private studio thanks to the addition of a shielding wall, with most of these quasi building blocks running on wheels. All of these factors funnel into Maser’s thirst for a liberating base, one which he is relieved to have secured without the unwanted input of investors. “There’s been no strategy or mad marketing, it’s all grown naturally. One valuable trait we have is integrity: people sniff out something disingenuous pretty quickly – ‘he’s just doing this, or that, for monetary gain’. If that’s your sole objective, even if you mightn’t be aware of it you’ll burn out pretty quick, because this is a slow-burning game and you need patience.”

What truly makes Atelier Maser a game-changing addition to Dublin’s art sector is its embracing of ‘street artists’; an Instagram-spawned term they typically shun in favour of contemporary muralists. Considering Maser’s long-time immersion in Ireland’s graffiti sub-culture – and the camaraderie-driven traits of that same community – he couldn’t be a more fitting proponent to break down the barriers between traditional showcasing spaces, such as established museums and galleries, and graffiti artists. “I believe our art should be credited – not that we need museums or anything, but just to put our work within a different setting for people. We want to paint but we also have other creative needs, so [a multi-dimensional space] is something we naturally gravitate towards too”. This mindset was first reflected in his choice of Peter Doyle, who hails from a graffiti-art background, and it’s further solidified by Atelier Maser’s first artist-in-residency, Aches. Having toiled away at the graffiti game for 10+ years now, his path frequently crossed with Maser, the latter first sowing the seeds of a possible residency when they worked together on the re-imagined “U Are Alive” mural, refreshed with Aches’ signature overlays. “At the time I probably wasn’t committing to anything yet, because I was still trying to flesh it out and see where it was going, but Aches was top of the list to ask. I really believe in him, and think he’s a fucking incredible artist. In years to come, I would love to be able to say, ‘oh, I was a part of [his evolution]’, so selfishly that’s a part of it but, also, getting to work with a great artist is just fun.” 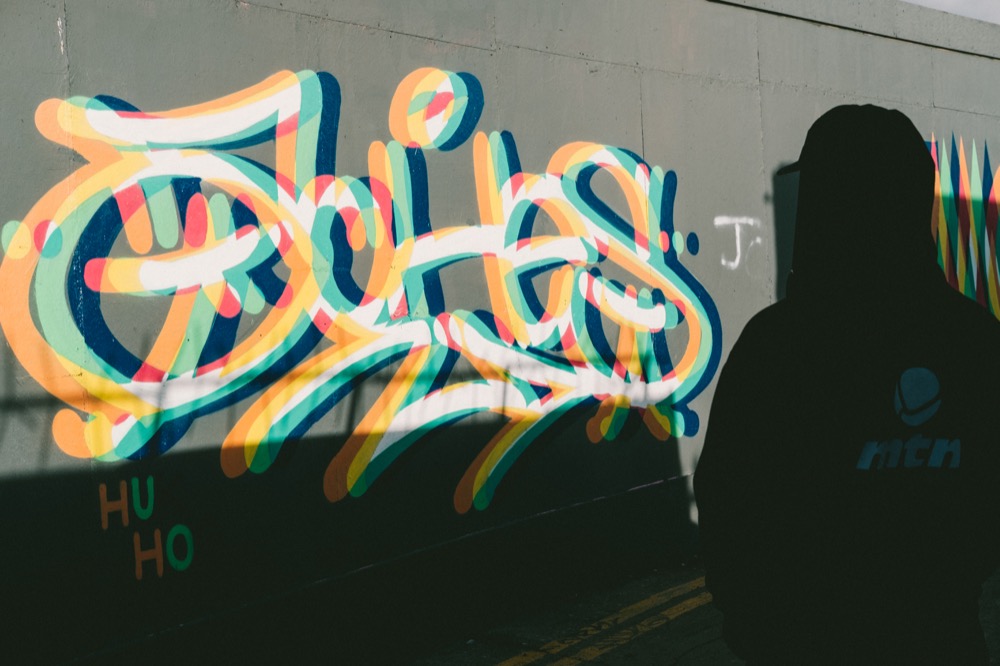 Aches strongly acknowledges that the graffiti scene, in both domestic and international terms, has “come a long way, having been so frowned upon before. In the past, no matter what you were painting on the street – it could have been one of the best murals in the city – if you were using spray paint, people would automatically [slot you into a stereotype]. But now it’s changed completely – if I’m painting something outside, no matter what it is, people usually stop and talk, they’ll have a positive word to say and admire the colours.” Having cut his teeth on outdoor canvases – his stirring mural of Savita, painted the night before the Repeal vote, proving his most impactful so far – this Atelier Maser collaboration has made Aches adopt a studio mindset for the first time, a transition Maser himself is only too familiar with. The latter’s personal experiences, coupled with the inherent ease both artists exhibit around each other, have clearly helped smoothen that changeover. “Doing a solo show was always in the back of my mind, but a good bit down the line – I don’t think I would’ve actively gone to seek it out for another little while. But this experience facilitates it perfectly. It’s crazy the difference between painting a wall and painting a canvas. I could paint the same design on a wall, and it’ll take me two days.. I don’t know if you find that the same,” Aches ponders, turning to a nodding Maser. “I do yeah. Like how a writer has the pressure of a blank page, it’s the pressure of a blank canvas… there maybe isn’t so much of a responsibility when you’re outside, the space just lends itself well and it’s a little looser,” Maser states. “It’s so good for young artists to do this though, because you’re evaluating yourself and what you want to communicate. Essentially all outdoor work is transient, you know it’s not going to last forever, but a canvas is this tangible thing that, if you don’t do it right, is gonna haunt you.” 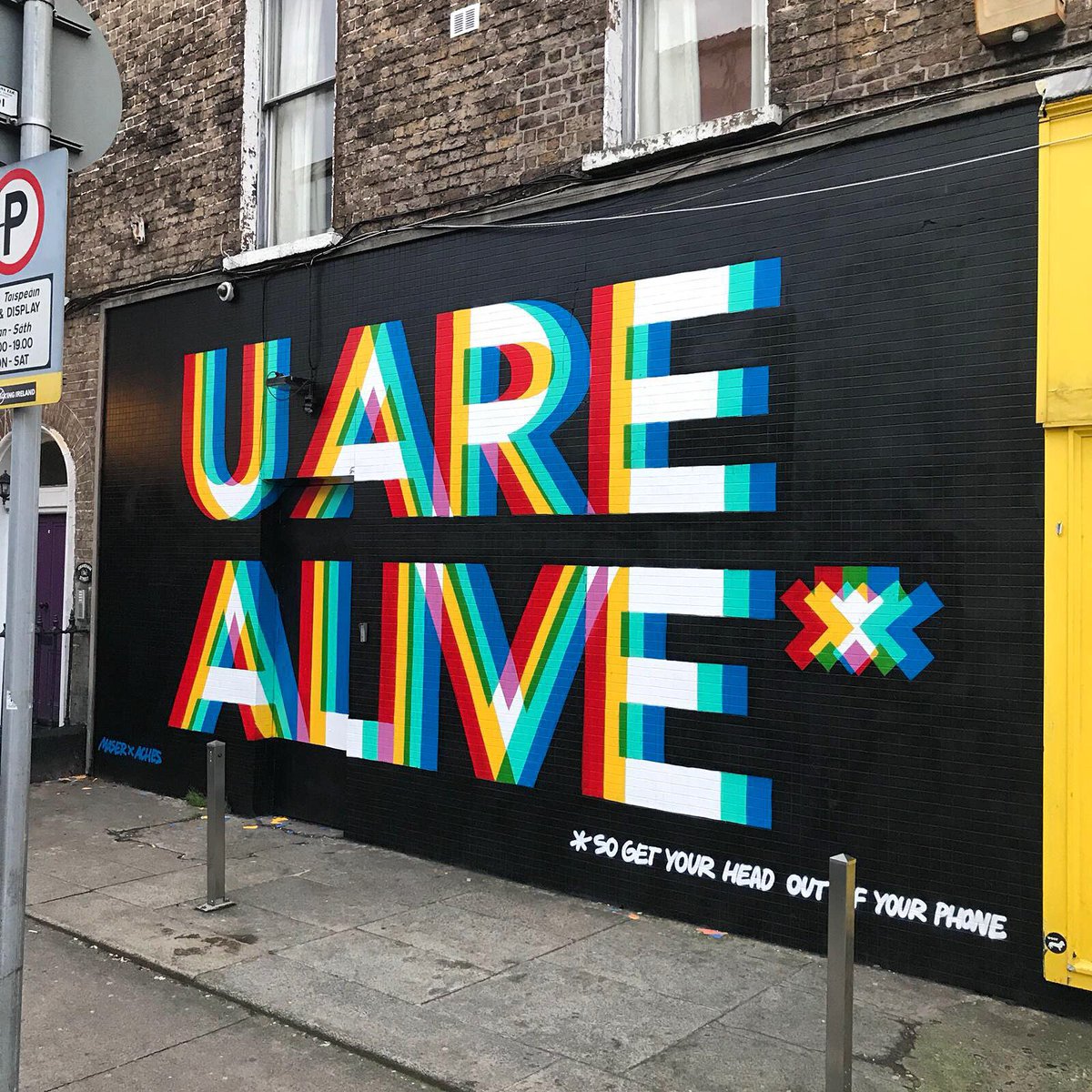 With the fruits of his labour coming to fruition this month, Aches’ key influence for the show – the contradictions and distortions brought about by digital communication – was hinted within an aforementioned work, the anti-phone message asterisked on “U Are Alive”. “The concept draws from how everyone these days is constantly on their phone – they spend more time talking to their loved ones, friends and families through a screen than in person,” Aches explains. “Painting-wise, I’m trying to replicate people that I talk to on a daily basis through a phone, using the same colour palette as a screen; RGB light that shines at different percentages to create a spectrum of different colours. With the first big piece that I painted, I created 87 shades of red, green and blue, so that when you stand from a distance or take a shot on your phone, it automatically shrinks and the colours blend together to create skin tones. The rest of the work has a lot less shades of RGB – everything replicates grayscale.” The sub-pixel portraits he has previously garnered praise for are thus re-appearing, with a powerfully-resonant subject matter to boot – but his artistic approach is even more painstaking here than with his murals. “I’m definitely more clinical with the work in the studio, because I think people usually do view murals from a distance. There are so many distractions outdoors – when you know your work is gonna be displayed in a clean, crisp white space, you gotta do it right.”

As Maser affirms, “a true artist is definitely someone who responds, reacts to their environment, and that’s really what Aches is doing with his work. He’s reacting to something that’s so important at the moment.” Akin to Peter Doyle’s show, Aches’ exhibition will run for three weeks, with showcases put on “once every three months as it’s a multi-functional space, but we’ll re-evaluate that again and, if there’s more of a demand, we’ll restructure things a bit differently.” Additional offshoots to the Atelier include a once-monthly yoga and mindfulness session, trialled in February with 25 attendees, and a workshop with primary school children that, in line with Maser’s inner ethos, was spontaneously put together: “That was class! The school in question had chosen me as their Artist of the Month, and painted a big collage of my work. We had Peter’s show on at the time, and they were so receptive that we thought, why not invite them in? At first they felt it would be tricky to organise bringing in 20 school kids, but they thought some more and felt it would be a great opportunity for them. They organised a bus, brought them in, we did a workshop with them, and then hung their work up on the wall – it was great craic, and had an educational quality. For Aches’ show, we have another school session lined up: we literally sit on the floor with the kids, talk through the art and ask them what they see, and then they do some work.” 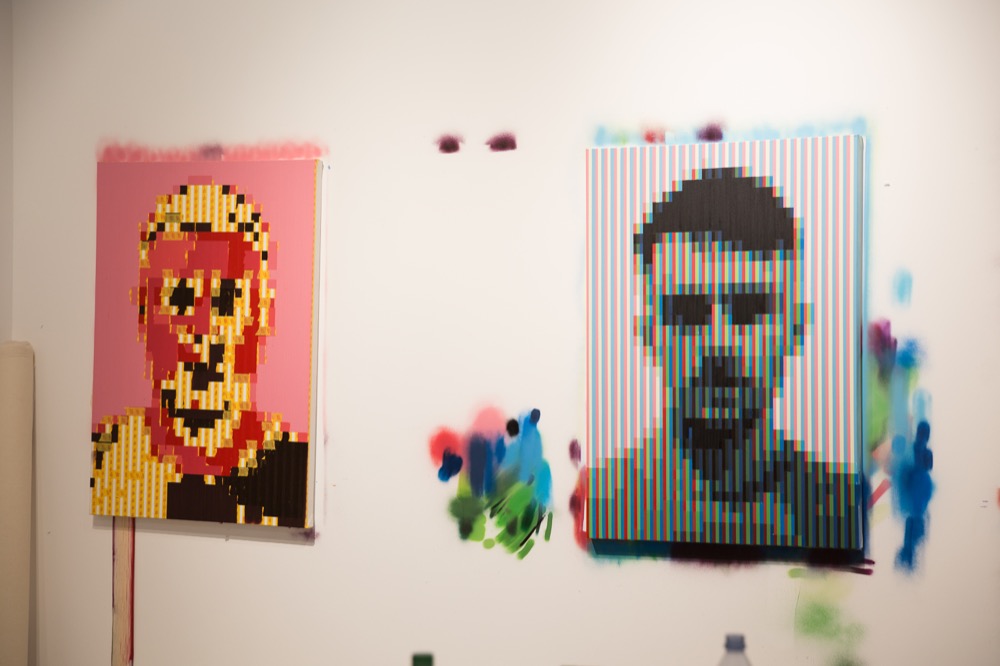 While Maser is keen to bring international talent to the Atelier – “build up relationships with other galleries that I’ve already established from showing with them, and then cross-pollinate with artists” – his love for the peers that have always encircled him here is resolute, and will remain a source of inspiration whilst his space continues to metamorphose. “I can’t take credit for this because it all comes from conversations with people, giving me that coaching, that support.. that’s the great thing about Dublin, I couldn’t have done this in London. It’s just nurturing all those relationships, and this space is the result of that. Solo shows for people like Aches – I can facilitate them in some way and lend a space, but then it’s up to him to create that amazing work. And he has.”