The Shadow of a Gunman – Interview with Amy McCallister 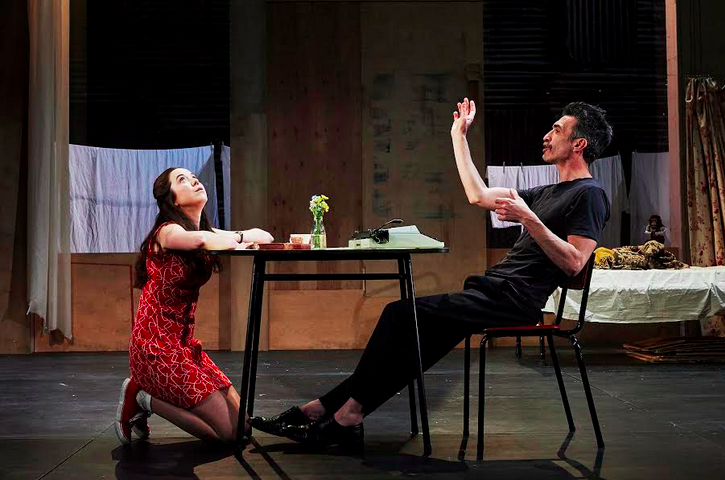 The Shadow of a Gunman, Sean O’Casey’s gritty play about human endurance, love and loyalty at a time of Irish political unrest, has made its debut at The Abbey Theatre. We sat down with actress Amy McCallister to discuss the show.

What is the play about?

It’s about the revolution where people are not as involved in it as they want to be, but are trying to make connections with it. They’re trying to figure out what Ireland is going to be and where they’re going to sit in it. That makes it sound really boring, but it’s actually great craic!

Minnie is quite young and sort of impressionable and she’s looking for some excitement; she wants something to change. She’s quite cool because she’s a bit more forward thinking than the other women in the play; she lives on her own, she’s an orphan so she’s been on her own for a long time, she’s got a job, she’s not married, she’s a bit more like the new type of woman that’s going to happen but she’s on her way. She’s more independent and is more into stuff like her clothes. She’s a bit more modern, like she’s into going to dances, which is something, the older women think is a bit saucy. I think she’s pretty smart, but really uneducated and quite blinkered I suppose.

When I’m in a play, I never tell people to come see it because I think they might hate it. It is a bit shit sometimes, but I honestly think it’s brilliant; I’m really proud of it. The director Wayne Jordan is amazing; he’s made it really accessible, although I think it already was because now that I’ve read it, it is really great craic. Some of the others have been describing it as a slut of a play, like, ‘Hey look at me! I’m funny!’ but that’s what you want. Wayne and the guys all just make it so great and I think everyone should come and see it.

How did you make the character your own?

I suppose that’s not the way I would approach it. I don’t think of it as adding stuff, it always comes from you and Wayne would’ve chosen us because something in our essence is right for that character. The way I am in real life probably does leak into the way she is, but only when it’s right, and sometimes it’ll happen when things aren’t right with the scene, like when you have a character who’s braver than you.

The show is opening here in The Abbey tomorrow. Are you nervous or is it just the same old same old?

I’m never same old same, old really. This show is a big deal for me because it’s my first opening night in Ireland. I’ve done quite a lot of plays but only in England and Berlin. I’ve always wanted to work here.

So do you have great cast mates?

They’re lovely. They’re also really professional, like usually there’d be one or two people who don’t really care, but they really care. From the young ones to the old ones, everyone is real nerdy; so if you go in half an hour or an hour before the show, everyone, including the old pros, are out doing their lines or thinking through what’s going to happen. It’s nice because when you’re younger you feel embarrassed that you want to go and warm up, you feel like they think you’re a silly drama school student and you’re doing your silly drama school stuff, but I don’t feel like that at all here because everyone’s the same, everyone’s a big nerd too.

How long have you been away from Ireland?

I’ve been away a while now, I went when I was young. It’s weird to be in Ireland; like it’s cool but it’s strange.

I have a really sort of through-the-gauze view of Ireland. I live in London and if a bus driver was mean to me I’d always be like, ‘If I was in Ireland the bus driver would be giving me a cup of tea!’ Whenever anything happens here that’s not in line with my little pretend idea, I’ll bawl. I got on a bus once here and the bus driver was mean to me and I cried because I was so disappointed in Ireland as a country, which was ridiculous!

I expected you to have an English accent, but you don’t, you have an Irish accent. What’s that about?

Yeah, I’m very confused. I definitely feel like it depends who I talk to. If I was talking to Lloyd Cooney, he plays Tommy Owens, it’s a bit more like what I would’ve had growing up. I don’t know where I sound like I’m from, sometimes when I’m off the plane from London my friends slag me for sounding really English.

Before you get on stage, do you do anything to get psyched?

Actually, with this show I do, but I don’t normally do that. There’s this song I listen to every night before the show and it really gets me in the Minnie mood. Sometimes I’m sick of the song but I still put it on. It came on when I was at a christening yesterday and I felt so weird, I was like ‘I’m not at work, this is my day off! Do I have to go on stage now?’

You’ve had extensive experience on stage. Do you prefer theatre acting or cinema?

I feel like I haven’t done enough film to decide yet, but what I do know is that I love theatre. And, so far, I like film but haven’t done very much. I love the fact that it exists beyond, but I also love the fact that theatre doesn’t. One of my favourite shows is also one of the ones that sold the least, and sometimes we did it for twelve people a night. It’s sad because it’ll never exist again and I can’t get it back and I cant show someone else, but how cool is it? Those twelve people saw it and only them and no one else can see it and that’s cool. It’s like a little bullet in time and I like that.

Is there much of a difference between acting over in London and acting here? People? Production?

Yeah but this is my first job in Ireland so I haven’t a lot to compare it to, and this job already feels different in lots of ways. I’ve really never laughed so much on a job, I’ve enjoyed other jobs a lot, but I really enjoy coming to work on this. I really do and I have great craic almost all the time.

I did a play called Don Juan Comes Back From The War, which is the one where sometimes we had 12 people a night. It was with this extraordinary but quite scary Israeli director called Gadi Roll and he soundtracked the whole play but didn’t tell us until we started doing it.

We didn’t know this until we went in for tech week, which is when you go in and they start adding all the stuff. There was this bit where I was a child prostitute and I had to follow this man around the back of the stage and we’d come on together and there was just this gorgeous music, this beautiful [heart-wrenching] music and it was a really interesting scene because he doesn’t want sex, he just wants company. It sounds weird but I loved walking behind him around the back with this gorgeous music getting ready to go on.

If you could have any role in the world what would it be?

I think one day I’d love to play Mrs Hannigan [from Annie]. When I was about eight, I heard there were open auditions for the panto in The Gaiety. They were looking for an adult woman and I went. I sang Mrs Hannigan drunk and I had a great time. I was always really scared of singing as a kid. I found it really vulnerable, but for some reason it was the only time where I didn’t feel shy at all because I was playing a character and so maybe it comes from that. It was a good memory.

What’s next for you after this play?

I’m going to the Royal Shakespeare company which is exciting. I’m doing Hecuba, a version by Marina Carr, she’s an Irish writer and she’s amazing. I’m not a fan girl of everyone by the way; I’m just lucky this year.