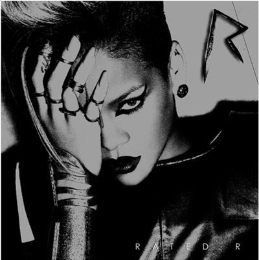 When you’re the biggest female r’n’b star in the world and you’re about to follow up one of the best pop albums of recent years with eagerly anticipated new material one imagines you don’t really need to go on the hunt for publicity. Sadly the attention Rihanna has attracted this year has largely been over the attack she suffered at the hands of her ex-boyfriend Chris Brown outside the Grammy awards in February. The photos of Rihanna’s battered and bruised face which appeared in the press a few days later at once threw Brown’s career into disarray and made Rihanna an unwitting and unwilling victim – and judging by the defiant tone of Rated R, it’s a role she is keen to leave behind. If one comes to Rated R expecting Rihanna’s insights into domestic violence, or details of her troubled romance, disappointment may lie in store (and it would be morbid, even ghoulish to acquire the record for such crass motives) but Rated R does at least flirt with themes of being abused, or wronged, or being caught in dangerous situations. The mood is heavy throughout, and thematically it is dark – almost austere. The album is therefore lacking a stonking disco track of the Don’t Stop The Music variety, but the brooding atmosphere and steady pace of Rated R is largely very successful. Much of it, like Wait Your Turn or Hard, sounds like Rihanna’s recent collaboration with Jay Z and Kanye West (Run This Town, which doesn’t feature here). It’s a harder, tougher sound than one might be accustomed to hearing from Rihanna but the blacker the record gets, the better. Ne-Yo and Stargate help out with production, Slash appears on Rockstar 101 to add heavy metal clout and Will.I.Am features on the standout Photographs, a track which switches gear to great effect; ballad-like one moment, groovy soul-pop the next. While Rated R is not as immediately impressive as Good Girl Gone Bad was, with repeated plays it offers great reward. Next time she’s at the Grammys she should be making headlines for the right reasons.