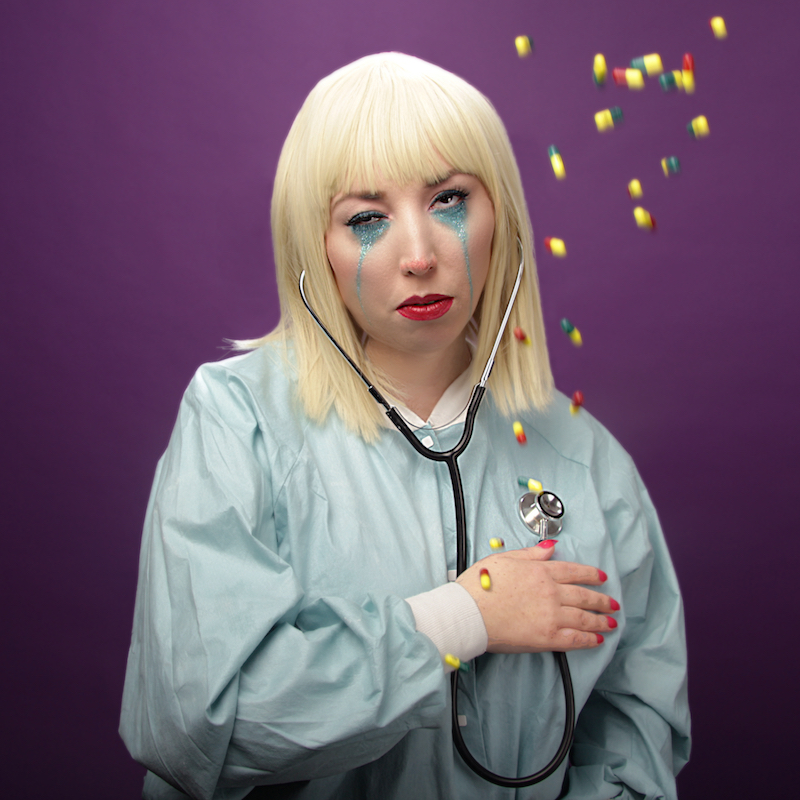 Having encountered severe anxiety, depression and suicidal thoughts, Naoise Roo is focusing on her therapeutic process and her relationship with herself.

If you speak to, or observe on social media, the vast majority of artists across Ireland, you’ll discover that their talents go beyond song sheets and the stage. In many cases, songwriters, out of necessity, don many hats, some heavier to than others to shed. They assume the roles of manager, tour booker and promoter in order to establish their career and ensure their music reaches an audience. Such exertion can severely affect the wellbeing of an individual with so much expectation placed upon them from external and internal sources. Naoise Roo is familiar with this pressure and professional disparity since starting out half a decade ago. No topic for conversation is off limits with Roo. From discussing gender inequality issues within the music industry to swapping true crime podcast recommendations and sharing anecdotes of gigging in a Dolly Parton costume, there’s an immediate ease and comfort in chatting to Roo. This openness extends to her lyrics which often chronicle challenging periods in her life. Her articulation in relation to her mental health is evocative and eloquent and always resonating, especially on her latest EP, Sick Girlfriend.

On the first body of work from the Dublin-based musician since her critically acclaimed debut album Lilith in 2015, Roo ponders, “Who is someone else when they are not themselves?” atop sombrely strummed chords on the introduction of Falling Stars, a song which heralds tones of Lana Del Rey’s more introspective instrumentation. We can see from the opening line that the aforementioned conflicting roles adopted by independent artists are central to the narrative arc. “That [song] is about my relationship with being a musician and one who has a lot of mental health issues,” Naoise Roo explains when we meet on a bright evening in a central location masked by scaffolding. She continues, “We’re in a social media age where everybody is telling you that you have to be your own PR machine. Everything you do has to have some sort of angle and what you express is supposed to be part of a brand. I find that deeply uncomfortable. It doesn’t resonate with me to be pushed to present the most positive ideal and self-aggrandizing form of yourself. I just wanted to be honest about how shitty it felt to do that.” Across a quartet of differing arrangements, combined with this sense of discomfort, themes of depression as well as a critical look at the oppressive stereotypes projected onto women experiencing mental illness, as the EP’s title alludes, are addressed.

The period following Lilith’s release is remembered by Roo as one shrouded in anxiety and a deep depression. Despite the gap between releases, Ocean, the first song written for the EP was, in fact, penned soon after completing a cycle of promo and performing for the record. “About five years ago, I was very suicidal. In the midst of that time, I wrote about the feeling of wanting to disappear and what that overwhelming and all-consuming suicidal ideation is and that turned into Ocean,” she shares. A lapse in time between Ocean’s conception to the writing and recording of the remainder of the EP’s tracklist occurred in the wake of a breakdown, in which Roo decided to take two years away from music to recuperate.

When she eventually returned to the studio, Roo was reinvigorated by the recording process. In contrast to the LP, born from a mind map comprised of PJ Harvey, Anna Calvi with a Rob Ellis approach to the production, she entered the studio free from sonic stipulations. Prior to laying down tracks, she spoke to Liam Mulvaney (with whom she worked with on her record) in his kitchen where she played him skeletal versions of songs she’s written for the EP. Upon hearing the material, Mulvaney suggested going into the studio with no rehearsal or preconceptions of where the songs would go. To allow nature take its course, so to speak.

On this occasion, Roo was joined by Girl Band’s Dan Fox, producer and multi-instrumentalist Rian Trench and Jamie Hyland, a musician who has also worked with Girl Band in the past. Through laughter buoyed by reflected assurance, Roo jokes that with this particular trio of producers accompanying her in the studio she felt confident to proceed with Mulvaney’s advice, “If I was going to trust anyone to do that it would be those people!” Over the course of a day, drum and bass parts were tracked with vocals and guitar taking slightly longer. “We just let it all happen and it came together really naturally. It became this wonderful experiment where we sat around and I told them the vibe I wanted and the feelings behind the songs. Those were the only references everyone received before they did their thing. And so, a few days later the EP was done!”

Roo becomes animated reliving the recording of Sick Girlfriend, such is the joy it spurs in her. “I love the studio and making music. That’s the part that makes me really happy,” she says enthusiastically. “I really liked that way of working, too. If you get a room of musicians together, whose aesthetic and artistic intentions you trust, that can lead to a wonderful collaboration. I think [musicians] can get really bogged down with nuances whereas I like to capture things as they’re happening in the moment. I like when it’s rolling fast and feels very intuitive. When you allow people breathing room and freedom with interpretation, you facilitate more opportunities for really interesting and unexpected things to happen. A piece of work is not supposed to be particularly perfect, in my opinion. It is what it is in the moment and then you move on and make new work. I say that even though it’s taken me a long time to put something out! It just took me a while to write it,” she smiles.

One such unexpected moment noting an evolution in Naoise Roo’s sound on this EP is the tremendously infectious opener, Black Hole (“I never thought I’d write a bop! People were shocked,” she exclaims). Awash with wonderful ‘80s motifs, from Roxy Music-like guitar flickers and sparkling synths, the listener is presented with a tonal palette we haven’t heard from the artist. The song was released as the first single from the EP in May 2019 and was met with great anticipation from fans. Along with an online premiere for the song, a select number gathered in The Project Arts Centre in Temple Bar for a specially curated show to debut her stunning new material. The evening consisted of a line-up of musicians (Maija Sofia, Danny Caroll of Shrug Life, and more) taking to the stage with Naoise performing intermittently throughout the show, which ran for ninety minutes.

“The first time I presented that work, I wanted it to be in an environment where people were really going to listen; where reverence was required to give the artists a space to be vulnerable. It was also going to highlight how I felt about my mental health issues, being somebody who deals with severe anxiety and depression as an artist,” she explains. Roo continues, “I invited artists I respected, who had expressed experiences with challenging mental health either to me directly or through their work. It was important to have a captivated audience for them, too. I had written an essay for a zine produced by Selfmade [an entity in Ireland supporting independent musicians] about coming back to music which I decided to read towards the end of the performance. It was really important that the show was free, as well. I wanted it to be accessible for everyone because music is an amazing source of therapy and, unfortunately, sometimes when you need it the most you can’t get access to it. We were so grateful to have received funding from the Arts Council which made this possible.”

Naoise Roo expands further on music providing an outlet for anyone going through a difficult period, “It helps me order and process my feelings. You get some sort of closure from things that you may have felt like you’d never get closure on. I think there was three break-ups worth of material on Lilith. I remember saying to friends that I can never do another album because I literally cannot do another three breakups in my life!’’ With that, Roo reveals some of the inspiration that went into Sick Girlfriend, “While Lilith was about the ending of connections from relationships, these songs focused on my therapeutic process and my relationship with myself.” Certainly, while her lyrics come from personal experience, there’s a lot to take solace and share in these compelling compositions, reminding us how music is such an integral form of expression. Quite often, an artist sets sometimes inexplicable feelings into words bringing a sense of clarity not only to themselves, but for their listener.

Naoise Roo releases the Sick Girlfriend EP on Friday April 24. It will be launched at a future date once all this shit subsides.