A few words with Grant Hart 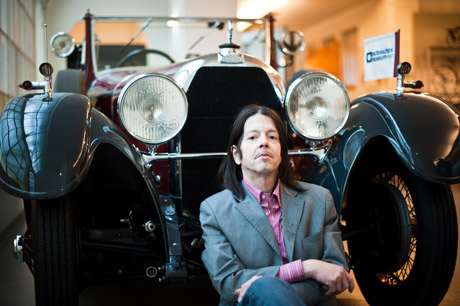 Grant Hart was in Husker Du. Let’s just get that out of the way. These days he makes grand pop music and his latest project, The Argument, is an epic album based on the most epic of literary sources, Paradise Lost. His house recently burned down, so we figured that’d be a good place to start.

First of all, how is your house doing? Has it been restored to its former state yet or have you been too busy with The Argument to think about it too much?

The situation with the house was very complicated. It was built by a family member in 1910 and expanded as he prospered. I purchased it from my father in 1990 in a private sale. He had been in a “nursing home” where it turned out he was the victim of an exploitative social worker to the tune of two hundred grand. She was aided in this swindle by a local police detective who had the balls to investigate my mother for the swindle. He retired when the swindle was exposed, avoiding departmental investigation by doing so. The social worker is doing hard time and he rides around on his Harley. Mum died one month after the fire. She never was without a home and that is the major reason I held on to it although I would not have sold it.

I had the choice to save the house, prosecute the murderous cop, fight with several agencies and pour all of my energy into a battle I could not even prove was mine to fight, or to continue working on The Argument, my musical based on Paradise Lost. After a sneaky move, the bank gave my house to the county and I was given a week to remove 101 years worth of familiarity from it. It was unceremoniously bulldozed. I can buy the property really cheaply now.

How did you feel about the elections last week? Were you happy with the results? Did you vote?

Minnesota became the first state to defeat an anti-gay marriage constitutional amendment last week. That is something to be proud of though, I am not one who thinks in those terms. I think the commitment should be between the two lovers and not involving the state. I like how New Zealand did it. When the issue came up they simply made all marriages civil unions and kept the witch doctors out of it entirely.

As for the presidential election goes, i think we saw much evidence of the media’s exaggeration of Romney’s chances. TV loves close elections and they made it look far worse for Obama than was the case. Is it about race? I think the conservatives had high hopes that Obama would screw up badly but he is too presidential.

I do think they threw Shephard Fairey under the bus, one phone call could have made a difference in the way that whole thing went down, and Fairey did tamper with federal evidence. I voted in the town where my house was and was challenged, but the county commissioner said it was okay. “Let the man vote” were his words.

What exactly are the plans for this upcoming tour? Will you be playing solo or with musicians? Will it be a presentation of the new album or drawing on older songs too?

On this tour, I am conducting some experiments with the material from The Argument. The material will need more musicians if it is to be performed live. Ideally, I think a seven piece unit that can change instruments and sub-groups is ideal. I will be playing some songs from The Argument, but it will be more like a “Grant, Yesterday, Today and Tomorrow” kind of thing. I will employ a second guitarist, a drummer and bass player.

Grant Hart plays Whelan’s this coming Friday, the 14th of December. Tickets are €11 and are available from the Whelan’s box office.