Hip Hop is Dead: An Interview with Olan of All City Records 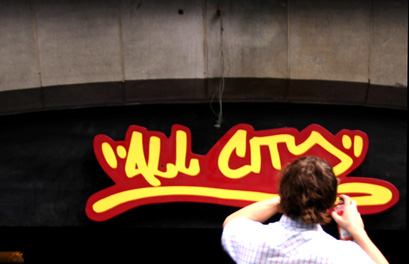 “Local wise – hip-hop seems like a Byker Grove thing right now. It’s the first thing kid’s are in to.” Olan, the man behind Dublin’s All City records sounds like he’s heard the now clichéd‘ hip hop is dead’ argument one time too many. While many hip hop heads the world over seem content to twiddle their thumbs and wait for the next Biggy to never turn up, the temple bar based imprint has quietly entrenched themselves in the thick of a burgeoning musical movement. Hitting their stride in 2008, All City released a series of seven 45’s with producers like Mike Slott, Hudson Mohawke, and Onra given the wax to let their beats shine. The shop nails its hip-hop flag to the mast, but the output from its label, while having roots in hip-hop, knowingly strays from the often-tired formula. Last month, French beat smith Onra laid down the label’s first full-length album; the outstanding Long Distance. Shop and label Co- Owner Olan gives us the run down on the label, aspiring youth club rappers, and future of Temple Bar’ s hip hop stronghold.

Congratulations on the release of Onra’s album. It’s an incredible release of work, and it’s great to see local involvement in an album that’s getting such high praise. How did your relationship with him come about?

I met Arno a few years ago through well-known Internet dating site – Myspace. We did a series of 45s in 2008 – all instrumental / beat maker stuff. There were 7 of them (because they were on 7 inches – conceptual, huh?) and his was the last – it’s called My Comet and it’s also on the LP he has just released now. The sample is obvious enough if you dig early to mid 80s funk / modern soul and basically I met Arno in person at a Dam Funk gig in the UK a couple of years ago and we both share a common love of that music and he mentioned he was working on a LP based on those sounds so we took it from there.

You’ve been releasing records since 2003, but really seem to be hitting your stride in the last few years. How has your approach changed?

Yeah, we really only became a label in 2006 when we got a rhythm to the releases – it’s down to the net really. It’s an immensely powerful tool for linking with like-minded heads from all over the planet. Obviously that can lead to a very boring back slapping consensus if you’re just hanging with people who have the same interests/outlook as you, but used right it can be very liberating not being restricted by geographical constraints. Hip Hop got very stale in the middle of the last decade – as a music form its standard of beats/rhymes got really uninteresting and even the mainstream progressives Timbaland, Neptunes etc can only hold your interest for so long. The constant money chat just makes it sound like a bunch of footballers on a night out and while I hate to use the prefix “post” there is an interesting space of overlapping music genres so I have an interest in releasing records – which you really need because there is absolutely no money in it.

The shop has long supported the graffiti scene in this city. I imagine the artwork on the releases is very important to you. Who’s in charge of that end of things?

If you grow up doing the classical hip-hop thing of digging for old records cover art is as important as the record itself. Plus its not really club music so that white label / promo template doesn’t really apply. We’ve had a range of people do Artwork – from local graffiti writers such as JOR to Scotland’s LuckyMe collective and most recently Irish-born Don of L.A music photography B+ is doing a series of 10-inch record sleeves based around LA producers. Donal of Practice And Theory oversees it all – check him out www.practiceandtheory.com

Aside from Choice Cuts, a lot of people wouldn’t know where to go to hear quality hip hop gigs in Dublin. Are there any hidden gems you’d recommend?

This is weird because the genre is so big now I’m not even sure what it means any more. I mean a local hip hop gig could be of interest to you in the same way some jazz heads might find Paddy Cole All-stars at the Red Cow Inn interesting or you might just like the classic stuff. If so, you’re well served in Dublin as like you say Choice Cuts bring over anyone worth bringing over. Local wise – hip hop seems like a Byker Groove thing right now – it’s like the first music kids start listening to – I’m sure the youth clubs of Dublin are the place to look for aspiring rappers.

You provided a lot of support for Mike Slott when his career was taking off. Are there any unheralded Irish artists that you see big things for in the future?

Obviously I’m only exposed to a certain section/type of this country’s music, but there are a few people worth checkin – Krystal Klear is making some noise, T woc. It’s very difficult here. I don’t really get sent many Irish demos oddly enough.

Get your obligatory plugs in. What’s on the horizon for All City?

Label wise- check out the LA Series we are doing ten 10 inch records from one of the most musically vibrant cities on the planet. The Onra LP, a new series of collaborative 12 inches kicks off in September starting with Mike Slott & Martyn. There are Lots of interesting people on that one. If you like anything we’ve done, check iTunes/Boomkat and please buy the downloads – the records are pretty much sold out and we don’t really care much for CDs! The shop is in Crow St; feel free to check it out