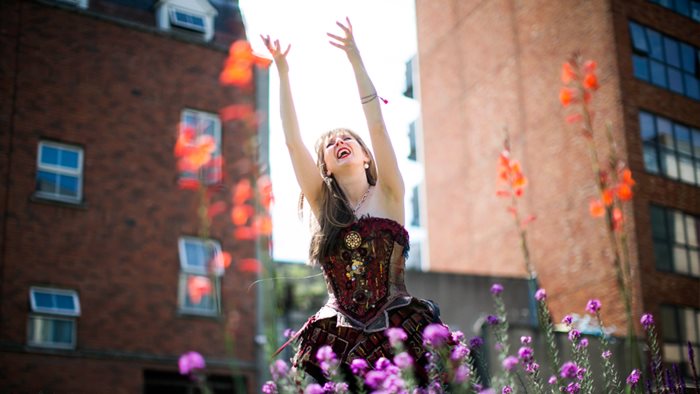 Dublin City Council’s Opera in the Open series kicks off this Thursday with the tragic tale of Orpheus, the master-musician who journeys into the depths of hell to save his beloved, only to find himself caught in a cruel game of the gods. This classically-inspired opera from master composer Christoph Willibald Gluck is the first in a selection of French operas taking place throughout the month of August as part of the festival. Don’t miss the chance to catch some rays and some culture at the same time. More info here.

GAZE is Dublin’s international LGBT film festival. It returns for its 23rd year this August Bank Holiday weekend with a comprehensive programme of screenings and discussions. This year the festival has a focus on LGBT voices in the sporting arena, and kicking off the weekend will be Malcolm Ingram’s documentary about aspiring and professional LGBTQ sportspeople, Out to Win. Other highlights include a screening of 54: The Director’s Cut, premiere of new Irish feature The Participants and a free screening, YesterGAZE, that will look at the effect of social media on the campaign for marriage equality. GAZE has your night-time entertainment sorted too, with Disco Inferno at Mother on Friday and half-price entry to Bukkake on Sunday. For more info check out www.gaze.ie or check-out our interview with the makers of The Participants.

Approaching the Landscape is a show curated by the Rua Red Young Curators Project. The project has been running for two years now, and its aim is to demystify the curatorial process and open up discussion around the use of our cultural institutions by giving a team of aspiring artists the chance to organise an exhibition in a public space. This year’s exhibition focuses on artists who respond to their physical environment in their work, specifically the unique surroundings of Tallaght, caught between mountains, city centre and suburban sprawl. The featured artists are Margaret Corcoran, Jason Deans, Niall De Buitlear, Conor Mary Foy and Lili Heller.

This weekend, as part of the “Films You’d Love Your Kids to See” festival, the Lighthouse Cinema is hosting Who Framed Roger Rabbit, a tale of intrigue, corruption, and toilet humour. Featuring a cast of esteemed actors both animated and otherwise, this classic comedy was as ambitious in its time as it is cherished today. Utilising a then-groundbreaking combination of live action footage and animation, it presents a half-cartoon world populated by a calcavade of classic ‘toons alongside Bob Hoskins and Christopher Lloyd at the heights of their careers. Wavering between adult and childish, with slapstick gags taking place against a back drop of Hollywood sleaze and cartoonified noir themes (and the absurdly voluptuous Jessica Rabbit to boot), the film appeals to all ages. Best viewed in a packed theatre, maximum yuks are guaranteed this Saturday. Tickets here.

GIVING WHAT WE CATAN

Are you nerdy? Are you nice? If you answered yes to either of these questions – we hope you did – Giving What We Catan is for you. GWWC: Dublin and The Board House game café are getting together to host a Settlers of Catan tournament in Alfie Byrne’s pub, with the entry money going to GiveWell recommended charities. Winners will get boardgame prizes as well as the choice of which charities to fund. To top it all off, the donation will be matched by Charity Science. If you don’t like Settlers of Catan, bring along your favourite game and you’re sure to find someone to play it with you over a nice beer by the Galway Bay Brewery. What better way to start August than by getting your nerd on for a good cause? Tickets here.

OUT TO LUNCH WITH VERONICA VASICKA AND WILLIE BURNS

Come to Bar Tengu this Saturday and grab a late lunch with two dynamic American DJs, Veronica Vasicka and Willie Burns. Veronica is probably best known as the founder of Minimal Wave, a record label specialising in obscure ’80s electronica, and her setlists tend to reflect this. Ranging between buoyant pop tunes and heavy, atmospheric nightmare-music, one commonality is the nostalgic buzz of vintage drum machines and synthesizers. Willie Burns has a similar love for minimalist music, working with simple melodies and a few key ideas, building into some really engaging stuff, with an overarching sense of levity. Bonus appearances on the night will be Irish acts Lumigraph and Ellll. Tickets – get further info here.

The Beatyard is having a change of pace this year and getting away from the rat race. This year the festival will be heading to the seaside, setting up camp at the beautiful Dun Laoghaire Harbour. Expect a carnival atmosphere with three areas of games, food and music. Bodytonic have brought in some big names for this weekend of summer fun; Sister Sledge, Four Tet, Neneh Cherry and Madlib are among our favourites. When your feet hurt from dancing you can pick up a pizza from The Big Blue Bus and have a game of giant Jenga in the Gamesyard. Sound like all your birthdays rolled into one? Get your tickets here.