Weekender: |wiːkˈɛndə|– noun – what to do with your weekend.

Think of Lost & Found as a treasure hunt where the booty is some of Dublin’s slickest spaces. We’ll be inviting you to kick off your journey from our base with a special edition Killer Sandwich banquet. From there, you’ll be kitted out with a map and set you off on a trail around some of the city centre’s most exquisite spaces to take part in some mystery events. You’ll collect tokens in each of these spaces that will unlock the location of our big blow-out at the end of the evening, where you’ll be enjoying some free Heineken to the sweet sounds of Cloud Castle Lake and MMoths DJs. Things will be kicking off at Berlin Café before moving on to some special venues. All awesome spaces in their own right, but we’ve gone ahead and programmed a set of mini-events that reflect the history and uniqueness of each institution, featuring the fantastic folk at Hunt & Gather, Damn Fine Print, Portraits By Ruan and TD illustrator Fuchsia MacAree.

We were lucky enough to have had a chat with Dave Darcy, the man behind One Strong Arm (and the cover of our second design issue in 2013) for our latest issue and having gotten the inside scoop about his debut show from the man himself, and we’re terribly excited all together. One Strong Arm strives to shine a light on the oft-overlooked art of letter press printing through collaborating with some of the city’s most eminent artists and designers. First on the agenda is a show in conjunction with illustrator Mick Minogue inspired by the opening lines from literary milestones from Kafka to Orwell and we can confirm, based on the sneak peak we got, that there’s going to be some lovely stuff on show whether you’re a bookworm or otherwise. Complimentary tipples on the evening will be provided by Jameson and the first run of One Strong Arm prints will be available for purchase on the evening or through their website thereafter.

Open Here is a three day conference running Friday 14th to Sunday 16th November, that discusses a range of topics and trends at the intersection of technology, society and economics. Hosted by Trinity College’s Telecommunications Research Centre, Dublin Art and Technology Association (DATA) and supported by the Science Gallery, there will be presentations from the likes of Linda Doyle, Nora O Murchú and the Robin Hood Collective, a self-proclaimed ‘counter investment cooperative of the precariat.’ As concepts like cryptocurrencies (like Bitcoin), open source hardware and digital sharing impinge ever more greatly on everyday life and become part of popular consciousness, Open Here gathers researchers, artists, engineers and activists to discuss the impact of these developments on real world material economies. Tickets and full program are found at openhere.data.ie

One of the jewels in the crown that is the Ensemble Music roster, Loah’s first major headline gig takes place in Twisted Pepper on Saturday night, and if you’ve been getting an eyeful of the beautiful video for Cortège (which is sung in Sherbro, an endangered language of Sierre Leone which includes the word ‘bro’), you’ll have a good idea of what kind of soulful, jazz- and world-inflected vibes you’re getting yourself in for. Loah, aka Sallay Matu Garnett, earned her spurs collaborating with a range of musicians including members of Little Green Cars and Collapsing Horse Theatre Company, and singing Niwel Tsumbu and Trinity Orchestra. Now she is striking out on her own with a band of shit-hot jazz musos backing her up, so it’ll be exciting to see just how far she can go. Get in on the ground floor: details here.

One of the marquee events of Ireland’s literary calendar, The Dublin Book Festival will run from 13 – 16 November in and around Smock Alley Theatre, Temple Bar as well as a number of historical and charming satellite venues around the city including, The Gutter Bookshop, The Irish Writers Centre, Fighting Words, Irish Georgian Society, Cooks Academy, National Library of Ireland and Dublin City Public Libraries.

The Festival prides it’s self on having a little something for everyone and the vast majority of the events are free, making for a fun, affordable and informative day out for the whole family. From comedy and literary fiction, business, cookery and children’s, to poetry and Irish language events The Book festival has you covered with a slew of enticing one off events on the agenda. Check out the full program at dublinbookfestival.com

Chali 2na’s rich, instantly recognisable baritone has always been one of the trademark’s of west coast rap institution Jurassic 5. Following last year’s pair of sold out Vicar Street shows with his J5 comrades, Chali is back on Irish soil with a full live band in tow. Jurrasic 5 have always had a rabid following thanks to their seemingly effortless capacity to transcend genres and audience expectations, invariably delivering on a head-nodding, hip-shaking good time. The promise of a full, live Chali 2na performance is without a doubt something to get excited about. Following Chali is another seminal leading light of early 1990s hip-hop, Stone’s Throw artist, turntablist and beat-maker J.Rocc. And if you are eager to catch these two icons if West Coast rap but don’t want to miss out on our boys in green’s crucial European Championship qualifier against Scotland, then not to worry, The game will be shown on the Sugar Club’s fantastic big screen before the music begins. If all that’s not reason enough to get all in a tizzy then good thing we’ve got a pair of tickets to give away, al ya gotta do is tell us is write ‘J5‘ in the comments below. Winners announced at 3pm on Friday.

Laura Cannell is an exceptional fiddle, double recorder and other rarefied wind instrument player with a history of remarkable sonic experimentation under her belt. The clue as to what expect from her latest Medieval Uprising project is in the name as she casts her curious ear over the rich musical culture of the 5th to 14th centuries and draws on their tropes to create heretofore unheard, ghostly textures all of her own. Joining Cannell on the evening will be singer-songwriter and Galway native Laura Sheeran. With an impressive back-catalogue of work utilised in film and theatre as well as in collaboration with Nanu Nanu and solo releases, Sheeran has been aptly described as “an episode of Twin Peaks in female form” due to her eerie, otherworldly song craft. Tickets are available now and priced at €10 but for those eager to hang onto their pocket money for the looming festive season, we happen to have two tickets up for grabs, all ya gotta do is write ‘Laura‘ in the comments below. Winners announced at 3pm on Friday. 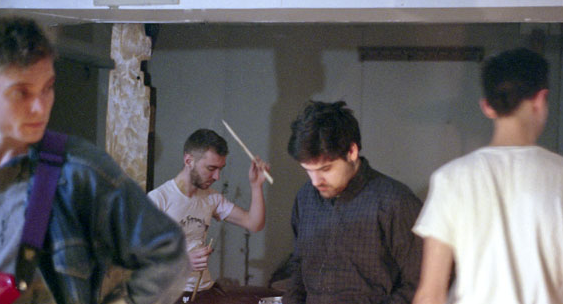 Released earlier this year, Ought’s debut album More Than Any Other Day seems to have made less of an impact than we thought it, er, ought to, but we’re psyched for their Dublin stop-over nonetheless. A wiry (and at times Wire-y) post-punk scuffle that also channels a classic era of 1990s guitar music like Sonic Youth or Dismemberment Plan, with guitars discordantly chiming and vocals spoken and spat by Tim Beeler, this might very well be one of those one’s where you can brag about seeing them on a rainy Monday in the Workman’s before everyone else gets in on the secret. If anyone asks, you prefer the earlier stuff.