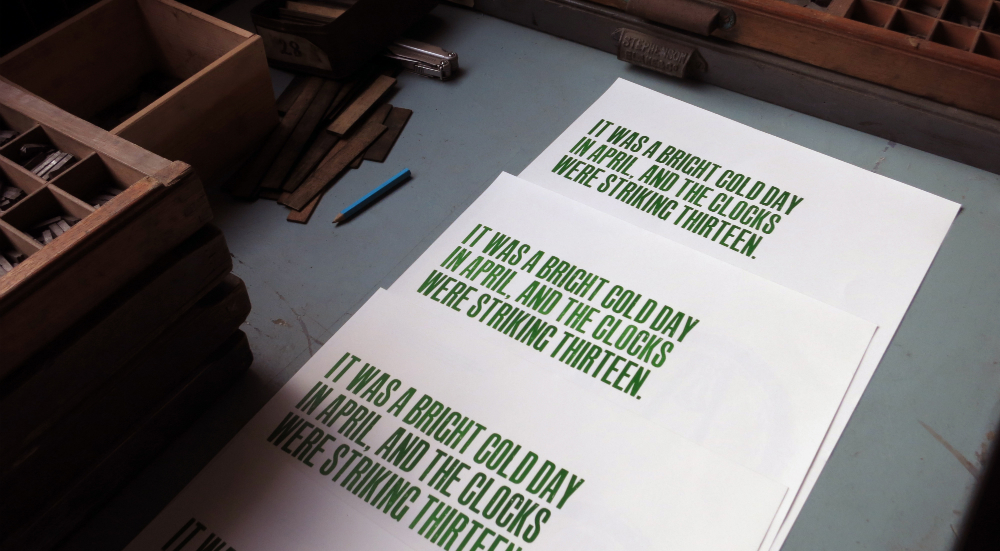 Dave Darcy, the owner of One Strong Arm’s eponymous appendage, is a man on a mission: to bring the oft-overlooked art of letterpress printing back into the forefront of Irish design community’s consciousness and beyond. The thing about printing, as a medium, is that every project is ultimately a collaboration, as the printer themselves engages with and enables the artist behind the work. The collaborative nature of this field is central to what One Strong Arm is all about, as Dave intends on producing a series of spectacularly realised edition prints in conjunction with some of the city’s most exciting illustrators, designers and artists. First up, he’s got a launch event at South William Street’s Georgian Society City Assembly House on Thursday 13th November, where he’ll be displaying and selling the fruits of his first collaboration with illustrator Mick Minogue. We sat down with Dave to chat about how he caught the letterpress bug and what exactly goes on in his ramshackle, ink-scented lock-up in Pimlico.

So Dave, the full extent of most people’s knowledge of letterpress printing is a learning about the Gutenberg Bible in Junior Cert History. How did you get into it?

Well, letterpress nowadays actually wouldn’t be a million miles off what Gutenberg did. He invented letterpress as a means of printing and totally revolutionised the process. That lasted 400 years and it has remained effectively unchanged, albeit modernised. Letterpressing in the style I utilise was the most prevalent way of printing in pro-active areas like the States and the UK until, say, the 1960s. It would have been here right up until the 1970s or 1980s and there’d be a few people, not many, doing something similar on to me commercially at the moment. A lot of them would be retirees though. They’re still doing it as almost a hobby now.

I was in the Print Museum not too long ago and one of the most striking things about it is the passion for the art coming from the men that made their living printing in the past.

Yeah they’re great in there. It’s great to notice that over the last little while that they are getting a good bit more attention as well. Printing is in my family, I’ve uncles that are involved in the industry in a large scale, commercial capacity, so when I was a kid I worked a little bit with him part time, and my background is in graphic design, so I’ve always been passionate about typography and printing but it was volunteering in the Print Museum over the last couple of years that really opened my eyes to the notion of letterpress work actually being a viable commercial venture for me, as opposed to just a historical passion.

It must have seemed almost unattainable to actually be commercially successful working in this style, considering the fact that I’d imagine the vast majority of your experience of the working world in graphic design has taken place staring at a computer screen.

That’s exactly it. Doing a bit of a crash course in the nuts and bolts of the machines in the museum really lit a fire under me to try and get something happening. Meeting Jamie Murphy, the designer in residence in NCAD, was a real eye-opener too. He probably would have graduated at about the same time as myself and he is a full-time printer. I was just looking at these other people who’ve managed to keep the art alive and it made me realise I wanted to be a part of it. Just being around all these amazing old machines in the museum, you really get obsessed with the stuff.

In a way it almost seems like the sort of thing that’s quite easy to get obsessed about. It’s such a singular activity in the way it sort of straddles the line between art and essentially being a factory worker.

Yeah, they totally occupied a space between artists, as we understand them, and workers. I’ve always understood that to be the source of the weight of responsibility that comes with the job. So many of these men and women have pretty much dedicated their lives to the stuff. When I first got the bug to start printing more stuff on my own, I went looking for a smaller, table-top press that I could use to make flyer sized output. So I managed to track down this 80 year old man – an absolute gentleman! – and he was just excited to see somebody who wanted to keep his little press in action to keep the process alive. Up until about three months before I got it off him, he was still using it. He was over the moon somebody was interested in this thing that was his job for who knows how long. So I got the first small press him and quickly realised that for it to both remain interesting to myself, and become a commercially viable thing to do, I needed something bigger. The most interesting thing to myself, and other people within the design world, were edition prints. I need something that was large enough to put out decent sized posters, so I became obsessed with that. I managed to come across the press I use now in Vienna after hundreds of broken conversations with language confusion and that sort of craic.

It was a complete impulse buy. I didn’t know how big it was, or its condition, so I had somebody that I’d met online go and check it out for me and they told me it was in good nick. A few phonecalls later and it was on the way. I had no studio and the thing weighs a tonne. I was a bit of a ‘What have I done?’ moment, so I needed to backtrack and figure out the logistics of this thing. Thankfully my brother had a place to keep it, so it sat on a pallet in Clondalkin for six months while I got my act together and everything else sorted. There is so much material that goes with it. All the trays of type, tools, these metal cases that hold everything together… there are hundreds of necessary items and thousands of potential issues, even with what you put down to print from, aside from the press itself. There’s a comparable amount of moving parts in these sorts of presses to a race car.

I cold-called pretty much every printer in the country. I’d say I made about 500 phone calls. So I found and met about half a dozen people who had stuff for me, just kind of dotted around the country, Wexford, Carlow, Cork. Some had loads, some had little bits and pieces but the stuff is so hard to find that it was worth driving to Carlow to get a toolbox worth of material. I’ve eventually built everything up to the point that press is fully functional.

It’s pretty inspiring to hear how excited all these auld lads in ink stained white coats were about somebody trying to rejuvenate the industry.

All that goes back to the sense of responsibility that I have about the whole endeavour. Lots of this stuff was just donated to me. Like these guys are retirees and saying to me, ‘As soon as you’re ready let me know and I’ll come down and help you set it up’. I’m talking about an 80 year old man from Cork wanting to come up to Dublin to help me move a one tonne machine! It’s like, ‘Thanks a million, but you’re out of your mind!’ [laughs].

The shocking thing, though, is that there’s a huge amount of value in lots of the stuff they’ve just given me. Some of it I’ve bought, people were selling it, It was worth money, much more of an actual business transaction. But I’ve been blessed with the guys I’ve met and most the time I’m trying to twist their arms to take the money off me. I’d have to persuade them I’m giving them a hundred quid to go out for dinner as opposed to in exchange for anything in particular. It’s a thank you, not a payment. Even just the other day I dropped into a printer and he was right away a bit like ‘What are you doing here? I’m a busy man,’ and as soon as I mentioned One Strong Arm his attitude immediately changed, you could see it in his face. The support and interest is unbelievable, it’s such a healthy, supportive, if small, community.

I hope you’re inviting all these lads down to the launch on the 13th of November.

Course I am. They’ll love it!