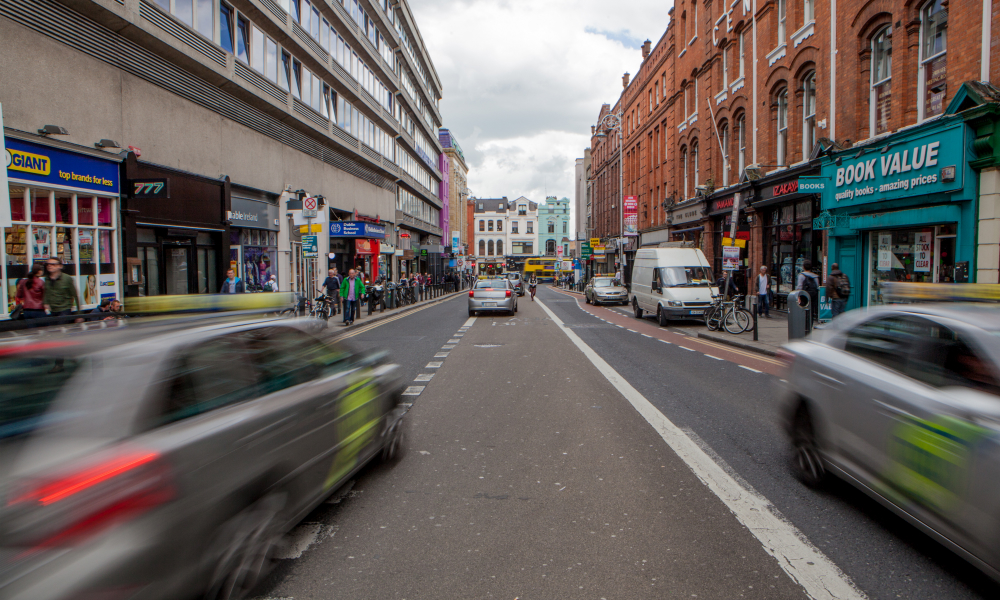 Military jacket and swing dress shopping in Retro. First-year-of-college first dates in Simon’s Café. Second-year-of-college third dates in Yamamori. Queuing for half an hour at the ATM carved into the wall of Dunnes to draw out our last tenner for a taxi home from The Globe. Sending off another emigrating friend with €7.77 cocktails in 777. Sleepy Sunday pints in the Long Hall pretending to read the newspaper. Most of us have done our fair share of growing up on South Great George’s Street.

Since its Wide Street Commission makeover in the 1780s, George’s Street has been an important commercial pivot between Dame Street and incoming human traffic from Rathmines and Ranelagh. Its relative architectural cohesiveness and mix of functions can be attributed to the 1880 construction of grand, gothic South City Markets (the George’s Street Arcade). When the black hole-like effects that the dereliction of the Iveagh Markets and private use of Smithfield’s old buildings are considered, the Arcade’s role as a social node can’t possibly be overvalued.

It helps that it’s pretty, too. It should be noted that the one blight on George’s Street’s Italianate, Victorian red-brick vista is the Brutalist office-block that was vomited up on the lot of the once grand Pim’s Department Store on the west side of the street in the 1970s. Sandham Symes’ once-majestic building lent the street a more grand, rhythmic aesthetic than it can now lay claim to.

Nevertheless, a healthy hodgepodge of commerce attracts a diverse set of Dubliners. It can be seen as a forerunner to the relative social and ethnic tolerance and integration that marks the city today, housing Dublin’s first true LGBT institution as well as the first major Japanese and Mexican restaurants. It lacks for out-door seating and spaces for gathering, meaning it can sometimes suffer fate as a thoroughfare but a steady set of tenants with strong identities offer enough character to create a positive sense of place (particularly when compared to its grimier sister, Aungier Street). 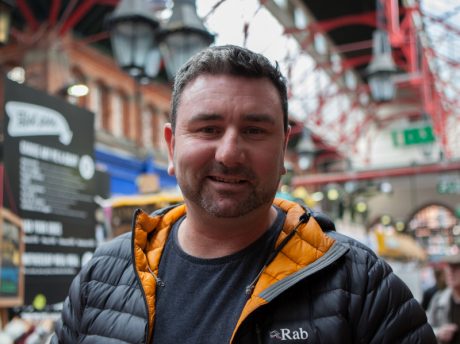 South City Markets was the first purpose-built Victorian shopping centre in Dublin. It was built by British architects, and a lot of the Irish people at the time didn’t like it. A fire burnt it down, and it was rebuilt by people from Dublin in the 1880s and has been trading since 1882.

I haven’t been here since then (though it feels like it sometimes) – I’ve been around for about 25 years now. My mum and dad used to work for the company that owned the market and I ended up doing caretaker work for three days a week. I also worked in a couple of stalls back then, like Little Macs, and in security – about 8 years ago I became manager.

There’s always change in the arcade, but we try and keep up a bit of quirkiness. We always have people looking for units. We’ve got more hip shops coming through like Bubblicity and Yogism bringing a lot more younger people into the place, and shops like Retro bring an older demographic in. We try to change with the times, we’re not stuck in the 1980s.

There’s a real community here. You’ll always make friends, the businesses will all go for pints together. The place is a hub in what’s now the Creative Quarter, it’s a little home for everybody around the area. You’ll notice in the arcade that everything has its own identity – it’s not Stephen’s Green. Everyone here is an independent retailer, and that’s the key thing.  It’s good to shop local, work with retailers who are doing it for themselves and everybody in this area appreciates that.

Pantigate and a recent Europe-wide survey of gay rights indicates we’re not quite as LGBT-forward a city as our complacency would have us agree, but The George’s historical success stands as an emblem of the gay community’s visibility in Irish society. Established in 1985 it is now the longest-running gay bar in the city. The George offers a distinctly mainstream gay experience that is nonetheless vital as an entrepôt into the gay scene for both Dubliners and tourists.

The heritage card is one too-often played in Dublin’s game of old man pub poker, but the Long Hall’s hand, at least, needs no bluffing. The oldest establishment on the street, this Victorian bar’s chief claim to fame is the setting for Phil Lynott’s sly winking in the Old Town video – visit today, and you’ll realise the interior hasn’t changed a whole lot in the last 40 years.

Barbara Nolan and Jennie Flynn’s enclave of ephemera stands apart from Dublin’s clique of design shops for its unabashed embrace of manufactured products over handicrafts. Nevertheless, it avoids the generic by stocking only the cream of Irish and international design work in this one-stop shit-I-forgot-your-birthday shop.

“We’re here about 16 years in this spot. In a sense it’s part of a continuum with a café called Marks Brothers, which was where Acapulco is now. We were there for 11 years – and before that one we were on South Anne Street. In the early days, George’s Street was a bit of a wasteland, it wasn’t really on the map. In those days, it was quiet. Initially it was Trinity students that got us going, having followed us from South Anne Street.

“The difference in 2014 is that the number of coffee shops in the city is quite unbelievable. When I started there we were one of the few spaces you could come and sit down in. Now there’s all sorts of cafés, and all the chains too.

“We have some really loyal customers. There are still people coming in here who I know from 30 years ago. People like the individualism.

“The arcade has changed, but that the original building is protected adds some real atmosphere. So much of Dublin gets overturned every 15 or 20 years – I’m not a stick-in-the-mud or anything, but it’s nice to have something old school.

“Dublin City Council don’t make it any easier. They’re objecting to more restaurants opening on the street. That’s stupid. Anybody wanting to open a new business in this day and age should be encouraged rather than leaving a building to go derelict. Fade Street’s a great example for that progress.”

You could be forgiven for having glossed over Temple Garner’s Italian enterprise in its first incarnation. A lick of paint and a shot of vim has seen it shoot up the league table of Dublin’s brunch spots, though its classy take on modern Italian cuisine and NYC dessert-menu indulgence remain its USP.

The Dragon, like its nearby sister-in-arms, The George, revels in the OTT. Camp as a lamé factory, the Dragon experience is tied closely to the relative quality of its club nights. Tranny chasers flock to Saturday’s drag nights, while the kids should direct themselves towards long-running student night PrHomo.

Stephen: We came upon Pitt Bros. at a wedding party in North Carolina two years ago. After the wedding we were quite hungover, went out looking for food and came across a smoked barbecue for the first time. We’d been looking at doing a bit of business together for a long time.

David: Nobody was doing smoked barbecue in Dublin at the time. We bought smokers in from the States – it’s been a big learning curve in terms of the smoking process, but we’re happy with business after the first eight months.

Stephen: George’s Street is a great street to be in the food business on.

David: Not having outdoor seating or a terrace isn’t a barrier to our business, but it is a little bit frustrating. The good thing about the street though, is that nobody’s static for very long which adds vibrancy to it. And when we’re full and we’re throwing out tunes, it’s buzzing in here too.

Stephen: A lot of our interior is reclaimed – corrugated roofs from a barn in Navan, the lighting is a Georgian gutter, the tables and chairs are reclaimed from schools. We had a mishmash of ideas, but the idea was that we wanted it to look upcycled but with a common theme.