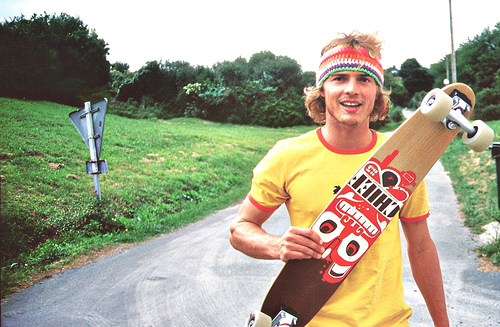 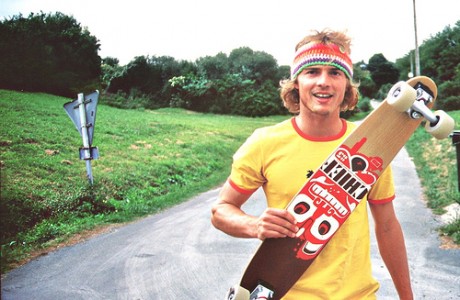 Our stroll through the archives continues with Stacy Peralta of the Z-Boys.

On our mind: “I’d like to think we will go the same route as countries like France and Japan where graphic storytelling is a respected part of the culture, although I do realise that I’m being slightly optimistic here.” – Comic writer Robert Curley
Really, they just wanted to surf. The kids who hung around the Zephyr Surf Shop in Venice Beach in Los Angeles didn’t have much more than a passing interest in skateboards. Well, at least not to start with. It was just something they did when for some reason they couldn’t surf. And that fact is probably the reason behind them changing the sport so fundamentally. When Z-boys entered the Del Mar competition in 1975, one of the biggest events the young sport had seen, their skating style was like nothing ever seen before.

At that time skateboarding resembled roller-skating, in the way we remember from old American comedies. Z-boys introduced an element of surfing, something that just came to them naturally. While skating in dried out swimming pools, they came up with ollies and all the other tricks that are now such an essential part of skateboarding that it’s hard to imagine a time before it.

“There was never any thought behind it. That’s just the way we skated”, says Stacy Peralta in his office in Santa Monica. When skateboarding became enormous during the seventies, the Dogtown crew with Stacy Peralta, Tony Alva and Jay Adams, became superstars and graced bedroom walls all around the world. And they weren’t just covered in skateboard magazines; Stacy for example played a small role in Charlie’s Angels.

Shortly after their breakthrough in Del Mar the Z-boys split up. New interests entered the fray and dollar bills were flashed in front of the teenagers. Stacy Peralta became a part of The Powell-Peralta company which grew quickly into one of the most influential in skateboarding, not only through their board designs and clothing but also through their team of new skaters. When I talk to him, he’s just about to go through the first draft of his script for a feature film, the story of surfer Greg Noll. Stacy is also to direct the movie, which will be yet another step in his career.

Why did you follow up Dogtown and The Z-boys with Riding Giants, a film about surfers?

I wanted to do something about surfers. I felt the “big wave surfing” story would be the best angle. In the story about Greg Noll, Kelly Slater and the rest of them, you find the history of the sport.