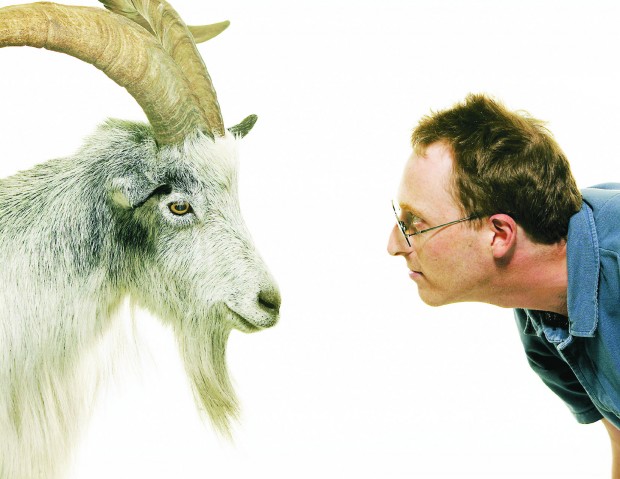 As we approached our 100th issue, we went digging through the archives to bring some articles that never made it online to light. This Jon Ronson interview comes from Issue 15. Clap Your Hands Say Yeah!’s debut and The 40-Year-Old Virgin were in the reviews section, and Cillian Murphy, in drag, was on the cover.

Jon Ronson’s humorous subversive books unearth the bizarre lengths the US Army goes to keep themselves one step ahead. Without a swinging light, he spills the beans.

In 1979, a secret unit was created within the US Army. It was called The First Earth Battalion and its members dedicated themselves to studying superhuman powers, like walking through walls, making themselves invisible and staring goats to death. When the British journalist Jon Ronson came across the story, he first thought that it was merely an embarrassing parenthesis in the history of the US Army. But as it showed, the ideas behind First Earth Battalion are still very much alive, and some of its followers are the people responsible for the strategic planning in the US War on Terror. This story became the follow-up to Ronson’s first book, Them: Adventures with Extremists, where the closing chapter is a narrative of how he manages to infiltrate a sect meeting in northern California. Men dressed in brown hoods, cast a spell of some sort while a man dressed in leather trousers and birch hangs from the top of a tree and swings himself about while preparing for the highlight of the event. A human sacrifice in the form of a papier-mâché doll is thrown into a burning stone owl. The sect is called Bohemian Grove and amongst its members are Henry Kissinger, vice president Dick Cheney and George Bush.

Jon Ronson has specialised in writing about powerful men with nutty ideas. His latest book, The Men Who Stare at Goats, was praised by the critics and received brilliant reviews in a number of publications, including the New York Times. Ronson came up with the idea for the book at Soho House, a private club in London many of whose members are media and culture sector professionals, and where Ronson is a member.
“It all started when I met Uri Geller. Bending spoons in American television made him world famous, but after a while he started saying the strangest things; he claimed he knew where the Ark of the Covenant is hidden, somewhere in Damascus if I remember correctly.”

And then he started hanging out with Michael Jackson.

That’s right. During all these years he used to claim that the CIA had hired him as a psychic spy, an agent that spies using the power of thought. No one believed him though. I took him out for lunch and asked him to tell me about it. He was wearing dark sunglasses and replied, “I don’t talk about that anymore”. “But Uri”, I said, “you’ve talked about that loads of times”. But he wouldn’t tell me anything. This was two weeks after 9/11. I continued to ask him about it, and suddenly he looked over his sunglasses and said: “If you ever talk about what I’m about to say I’ll deny everything”. “Of course”, I said. “I’ve been re-employed”, he said. “Re-employed? How do you mean?” I asked. “I’m not telling you any more.” And he didn’t. But I figured if Uri Geller had been re-employed as a psychic spy to help the Americans in the war against terrorism, it had to be part of a bigger story. And I wanted to find out what that story was.

And what did you find out?
The story begins at the end of the Vietnam War. The American army was going through hellish times in Vietnam. Tens of thousands of soldiers were killed, and the defeat influenced every little part of the military. The number of newly recruited soldiers had never been so low and they were running out of money. The commanders began to dream of what they could do to become invincible again – they had done so well in all the previous wars. And suddenly a lieutenant colonel by the name of Jim Channon claimed to have the solution. He said that if they give him some money and a bit of time, he’ll come up with a rescue plan for the military. The Pentagon felt like they didn’t have much to lose, so they give him what he wants. Jim Channon heads off to California and hangs out with new age crowds. He goes skinny-dipping in hot tubs and takes part in orgies, and this goes on for about two years.

So the Pentagon paid a man to party in California?
Exactly. It may seem strange that the defence budget was used to finance someone playing around in hot tubs, but still it’s understandable. The military were really down after Vietnam. They needed something nice to cheer them up, and they thought the new age movement seemed very nice. So Jim went away to California and had a great time, obviously. He let his hair grow long, stopped shaving, and started wearing tunics.

And what did he come up with after doing all this research?
A book he called First Earth Battalion. It was about 175 pages, handwritten and full of drawings – and it was a complete reform of every single detail of US Army. Soldiers would no longer carry weapons, instead they would carry little lambs to give away, and then hug the enemy. Also they would carry around speakers so that the enemy would hear folk music and messages of peace. If that didn’t work they would change the tape and play unpleasant sounds such as acid rock. Other ideas included teaching soldiers how to become invisible and walk through walls.”

What did Pentagon think of the book?
They loved it. When Jim gave his speech to the military commanders in Fort Knox in 1979, many of them started crying. Four star commanders-in-chief were in tears and gave him permission to go ahead with his plans.

So Channon was given more money from the Pentagon?
No, because he turned down the offer. He knew his bosses would want instant results. If he had accepted $50,000 to create the First Earth Battalion and had not succeeded in walking through a single wall after a week or so, the Pentagon would get cold feet and retrieve the money and the whole thing would be a gigantic failure.

So Channon realised that what he had written was madness?
No, but that it would perhaps take some time to make it work. Instead, what happened was that people read his book. Channon had lots of copies printed and they were passed around in top military circles. The commanders were very inspired and have continued to be so ever since. When I decided to write a book about Jim Channon and the First Earth Battalion, my main object was to find out what it looks like today – how his ideas influence the American military today.

Did the commanders try to put Channon’s ideas into action?
Yes, straight away. General Albert Stubblebine III, in charge of the American secret service and 16,000 men, immediately started to practice walking through walls. I’ve met him, and he didn’t think it was very strange at all. An atom consists mostly of emptiness, and both you and the wall are made up by atoms, so all you have to do is to get through the vacuum. He started practicing in his office in the secret service’s headquarter in Arlington, Virginia. He got up from his desk, started jogging towards the wall, and – BANG! Straight into the wall. Again and again.

He must have noticed pretty quickly that it was impossible?
Yes, but his view was that the problem was an obstacle he had to overcome, that he wasn’t concentrating hard enough and that this was the reason he failed. It was a big disappointment. He always had to think up different excuses when he showed up at coffee breaks all bruised. But from what I gather, he wasn’t alone. In the early eighties, there were whole divisions who tried to walk through walls.

But how is it possible that the world’s best-equipped army started doing all this wacky stuff?
There are a couple of possible reasons. It’s the military’s task to be innovative and come up with new ideas – even when those ideas are about superhuman powers. If they didn’t, someone else might do it before them. They have to be the first to come up with all sorts of new thoughts. The other possible reason is that the world’s leaders seem more inclined to believe in all kinds of wacky things than us mere mortals. We probably think that our leaders are rational people, but if you look back at history you realise that they were all a bunch of nutters. Hillary Clinton used to have sittings in the White House where she tried to get in contact with dead presidents’ wives, and Tony and Cherie Blair sometimes go to rebirth ceremonies in a pyramid in Mexico.

I’ve heard of Ronald Reagan’s astrologer.
Yes, Ronald Reagan had an astrologer named Joan Quigley, that was so important to him that he wouldn’t make any decisions without talking to her first. She told Reagan to sign an important treaty regarding the non-spreading of nuclear weapons a certain date. “Sign Saturday – that’s when the stars are in a good position.” Many leaders are members of strange associations. Skull & Bones, for example, that’s linked to Yale, and counts both George Bush and John Kerry among its members. They have all sorts of weird nonsense going on, like ceremonies where they lay themselves down in coffins. A couple of years ago I managed to secretly sneak into Bohemian Grove, where people like Dick Cheney and George Bush are members.

How did you manage to get in?
With a secret sign. It was just like in the film Eyes Wide Shut. My last book was about that. They made a human sacrifice in the form of a papier-mâché doll and threw it into a burning stone owl. In one sense it’s all just silliness, but the conspiracy theorists see it as evidence that the world is run by Satanists. The way I see it, it’s evidence that the world is run by a bunch of childish nutters. Why would anyone want to do that sort of thing in their summer break? I like to spend my summer break at Disneyland or at the beach. Dick Cheney spends his burning papier-mâché dolls.