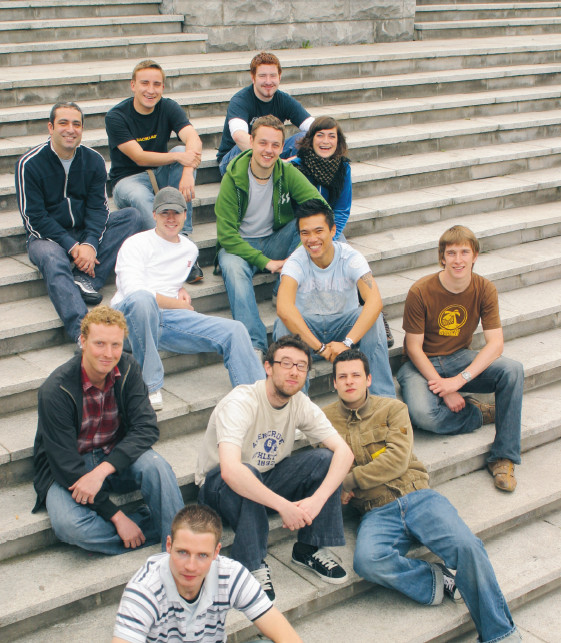 Dublin’s Bodytonic collective offers hope to all aspiring promoters and DJs that it’s still possible to play at and put on clubs on your own terms. Originally set up by Trev O’Shea aka Tayor because he wanted to “get more gigs” without having to go down the arduous route of pestering promoters, Bodytonic has evolved from putting on poorly attended nights in pubs to hosting a tent at the recent Electric Picnic festival and putting on three weekly clubs. So how did an unknown group of friends come to be Dublin’s most successful independent promoters?

“People like Bassbin and D1 were a big inspiration for me,” Trev explains as he looks back on half a decade of Bodytonic. “I saw how they built up their thing for drum’n’bass and techno respectively and I thought I could apply that to what I wanted to do. When we started, we lost money, played gigs to no one and got drunk because we were depressed that no one was interested! During the first year, I lost two jobs, loads of money and my girlfriend – thankfully I got her back – and things were as low as they could be. You have to be passionate about something to ride that all out!”

“When I started it, my family thought I was mad, but I didn’t care because I just wanted to be a DJ, run a night and have fun. It was only about a year ago, when we were getting so busy that we had to decide to go full time and treat it more professionally.”

Trev pinpoints hooking up with John Mahon, his partner and one of the Bodytonic residents, who was “similarly motivated”, as well as the club’s move to the intimate surroundings of Wax on South William Street a few years back as the turning point in Bodytonic’s fortunes. Taking place on Friday nights, the club has hosted every respected name in underground house music, from Theo Parrish and Ben Watt to DJ Deep and Sonar Kollektiv’s Dixon, but they balk at the idea that it is a self-indulgent deep house affair.

“There’s still confusion between Bodytonic the promoters and Bodytonic the club,” John Mahon believes. “We’re going to re-name the club Stereotonic, the name for our house gigs and our label. Two years ago, we ran deep house nights, but it’s a sound we’re moving from. Now you’ll hear everything from soul, funk, drum’n’bass, breaks, techno, live bands, grime and reggae at our nights. At Electric Picnic, we showcased that variety with acts like Laurent Garnier, Scruff and DJ Format.”

With their own club going from strength to strength, O’Shea and Mahon decided to branch out and, while Mahon says they “have no interest in being another MCD or Aiken”, Bodytonic now encompasses two other nights, Backlash and Pogo. Pogo, which takes place in three rooms on Saturday night in the PoD/Crawdaddy complex is the busiest weekend club in Dublin. The venue is a big draw, but the music is as important, a mixture of live music, eclectism and, in the main room, Barry Redsetta’s DJing, which juxtaposes cool Germanic techno with upfront electronic house and a party.

“The fact that it’s a three-room venue, means we can cater for a number of different styles,” says Barry. “ I would like to think that people are there for the music, but it’s a mix of die-hard regulars and the day-trippers. “Between myself and the three other regular residents – Arveene, Simon Conway and Tayor – we cover a lot of bases. Musically, it is more upfront than some specialist nights, but that’s the way we wanted it to be. “If anyone thinks dance music in Ireland is dead, go to Pogo on a Saturday night, and you’ll be pleasantly surprised,” O’Shea points out.