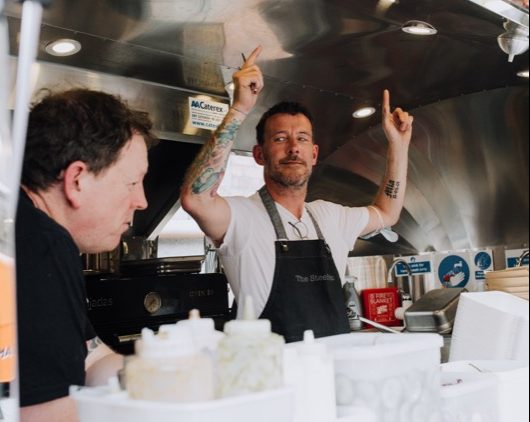 No meandering preamble for this one. Ed. is making a terrible racket about deadlines, as I write, so I’ll forego the foreplay and just get stuck in. We are here to talk about food trucks. Nothing as meaningful as a discussion on the nature of food truck culture (we don’t have one because of DCC’s arcane stipulations regarding where vendors can trade), and certainly nothing so jejune as a ranking. No, this is just some takes about three (relative) newcomers on the outdoor scene that are referred to as ‘food trucks’, although one is a trailer and another a shipping container. Whatever. Tomato, tomatillo.

Los Chicanos rolled into town (the only actual ‘truck’ here featuring motive power) a couple of months back to great fanfare, so great in fact that it seemed as if Jesus (with a soft J) himself was about to deliver the people of Dublin from a desert of ignorant tacolessness. I put that line down before I glanced at an image of the truck, which I now note features a prominent rendering of some kind of Latinx Madonna, her eyes glazed in adoration as she clutches some corn cobs, in loco infanta. Beneath her are the words ‘Blood, Sweat & Tacos’. Much of the first of those two things it seems though, went into over-zealous brand development, rather than the third thing.

Owner-operator Scott Holder, apparently, has some very serious stamps on his cheffing passport, from Arbutus in London to the revered State Bird Provisions in San Francisco. The very generous story copy on the site will also fill you in about a voyage of culinary discovery ‘down Mexico way’ as well as an arduous (and doubtless expensive) odyssey to get the enormous vehicle back here and up to scratch. The food we sampled on a balmy recent night just didn’t stack up. Such are the perils of brand narrative, whether you’re pitching or catching.

We ranged freely across the menu in search of the right order without finding it. The Baja Fish Negra was sodden and tasted not at all of fish, just lime. Lamb barbacoa had an unpleasant woolly mouthfeel with an ineffectual tomatillo mint sauce. The Chorizo had no punch and an unpleasant soapy backnote. Salsa Macha Cauliflower intended well but, again, fell prey to sogginess. Best perhaps was the Papas Picante but even the potatoes needed a hit of salt from my pocket. None of the preparations were helped by oddly large (and mealy) tortillas and perhaps charging for meagre shots of salsa is not the best way to enliven food that shouldn’t be underpowered and under-seasoned in the first place. This stuff should grab you by the lapels and shake you.

The sweet corn soft serve ice cream (€5) that finished our brief stay on the tarmac outside Elliott’s Cash & Carry tasted just of sugar and hype. Service was serviceable. Maybe I’ll come back if they decide the ride the birria wave. Maybe I won’t. Let’s not forget about El Grito in the meantime, those guys never promised salvation but miraculously manage to remain the benchmark for tacos hereabouts. 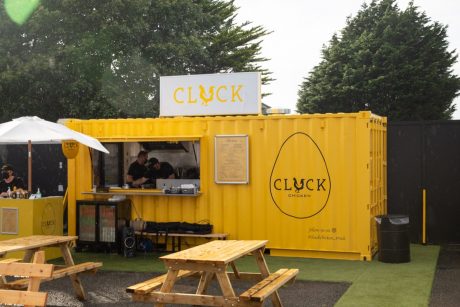 Another night, another carb-park. The glaringly obvious allure of the fried chicken sandwich has only become more apparent in the plague era. It briefly even surpassed the humble hamburger to become the most ordered item on delivery service DoorDash in the U.S for a time early in the pandemic. Its charms have not been lost on us either, with a number of brands throwing hats into the ring in recent years, most notably Mad Egg, Chimac and latterly, Cluck Chicken.

It used to be that you needed to negotiate the Ben Hur vibes of the fearsome Walkinstown roundabout to enjoy the pullety pleasures of this place, but no longer. They have just begun to deliver (and opened another location in Bray) but, should you decide to jump in the chariot, your valour will be handsomely rewarded. You will find a menu of items that were once known as junk food before the term fast casual was coined to allow conscience to kiss before biting. The difference now is that care is taken with sourcing (free-range birds), prep and presentation. Cluck patently attracts a very sportif audience. Virtually every individual on a recent Thursday evening was dressed in readiness for sports or aerobic activity of some form. They are to be commended on their calisthenic vim; the portions here are generous and the calorie counts considerable. 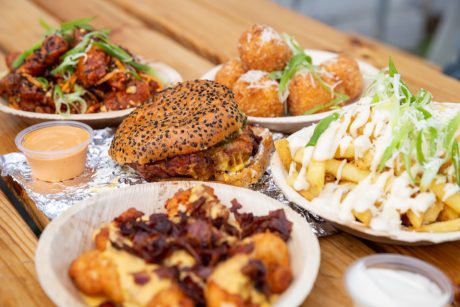 Of the signature sandwiches, I favoured the Mother Clucker, a moist fillet battened and buttermilk-battered with sharp pickles and just too much oozing cheese sauce in a potato-style bun. It’s everything I want from such a thing. The KFC (Korean Fried) adds (I guess) a rub of Gochujang and some Kimchi mayo for some manageable heat. It too is worth the trip. There are buttermilk tenders too (top-drawer, which can be ordered ‘in the nip’ or sauced) but I’m still waiting for somebody to explain why we’re so afraid of frying chicken on the bone here. This is where the serious work is done, where religious fervour begins, accreting over regular orders to become devotion. You deliver it to followers by the bucket. 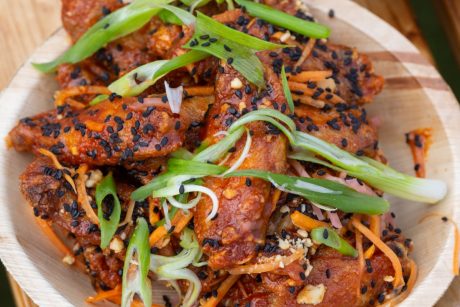 Whatever, what they do here is create fiercely loyal repeat customers and digital cheerleaders and good chuck to them. I’ll be ordering on the reg.

By way of segue, we also appear to be living through a golden age of French Fries in Dublin right now – Cluck’s are possibly even better than those at Dash (new spot on Capel Street!), but in late July, just off Francis Street I enjoyed some specimens double-cooked in Belgian beef dripping that made me understand that I was ingesting a kind of greatness. 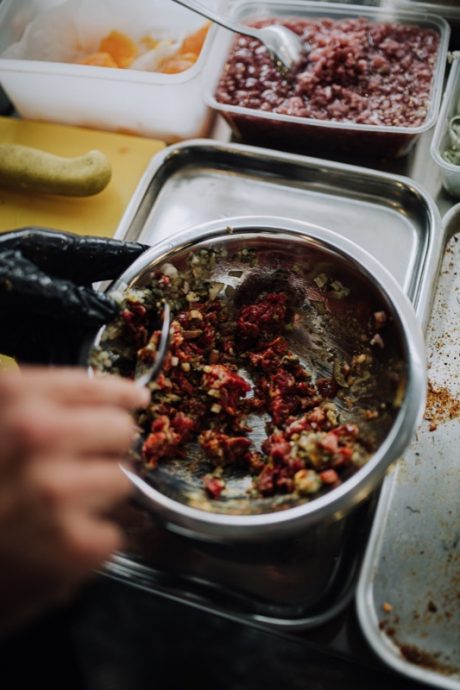 Hanger debuted early in July in the ‘horse and cart yard’ of the Iveagh Market as part of the deplorably named ‘Dinetown’ with some other vendors and was beginning to gain some traction before an (apparently malicious) fire shut the whole thing down. I live here and won’t say any more about that. What I will say is that I enjoyed beautiful Irish Bavette cooked over Irish timber with a bone marrow and madeira sauce, and oh! a gently barbecued tartare of Hereford beef heart with roscoff onion pureé and chive oil. I can’t stop thinking of both dishes and I’d like spend to a few hundred words talking about them another time. I’m not entirely sure if they will be back trading by the time you read this, but if you’re of a carnivorous bent I’d recommend that you follow their social feeds closely. I sure as hell will be.