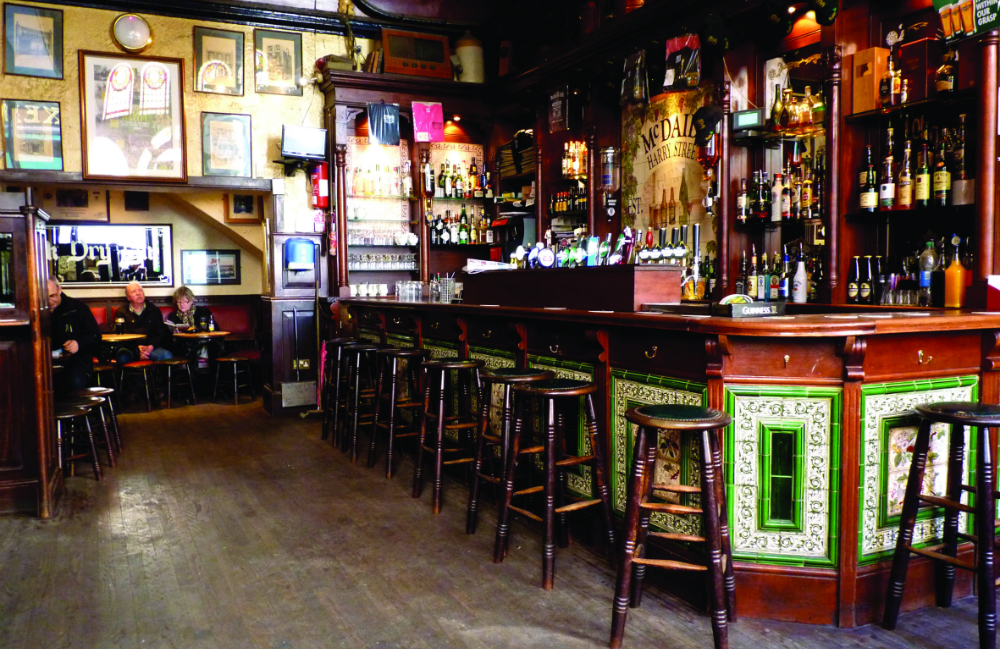 “Which one of youse is having the pale ale?” our barman asks as he leans in conspiratorially towards us. He continues, “What you make of it? It’s not that pale is it? They sent us a letter saying they were gonna make it darker because people like it like that. I’m not sure, haven’t had it myself.” My accomplice Fionnbhar holds his pint up to the dim evening light in the bar and nods eagerly in agreement, despite the lack of reference point. “Well… I’ve not had it before either but I think it’s delish!”

McDaid’s is, as the saying goes, small but perfectly formed. It feels like it may not have been updated much in the decades it has sat on Harry Street, but then again we notice an array of whiskeys new and old behind the bar and a fridge full of variety of Irish craft brews. Our barman however, his true colours already revealed to us earlier, has no time for the fancy stuff, and concentrates on expertly pouring ales for us both.

The atmosphere is plain-spoken too. There’s a TV perched over the doorframe but it’s predominantly an irrelevance, as when you look out that way your eye is naturally drawn to the details of stained glass that stretch over the door and window frames. This is a delightful place for conversation and simple pints. Anything else would seem an extravagance. The room is so small that from our bar-side perch we can check on what pretty much everyone else is drinking: there’s one lager, one gin and tonic and everyone else is on stout. We wonder out loud – extremely optimistically – if there’s food menu, and our barman smiles and shows us the crisps on offer.

As Fionnbhar and I discuss matters trivial and not so at the bar, a humungous hand reaches between us and seems to grasp two pints in one hand. We turn around at look aghast at the giants of rugby past who have set up shop behind us. “It’s him off the telly! From A Question of Sport!” Fionnbhar whispers excitedly. Indeed, it is Bill Beaumont, presumably in Dublin on official rugby business with the IRB Building nearby on St. Stephen’s Green. Even though the retired lock forward retains truly massive proportions, I turn to my accomplice unimpressed: “I was always more of a Beefy fan.”