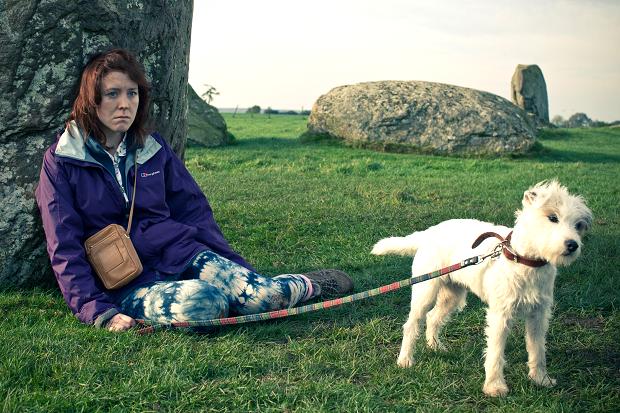 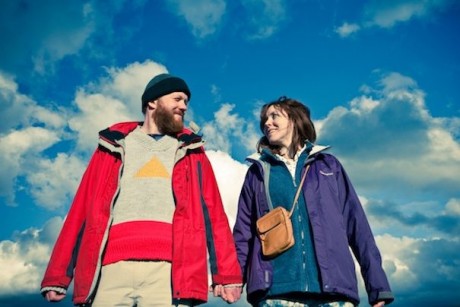 A lot of caravan holidays go horribly wrong, and for many different reasons. Usually, this is more likely to have been caused by the realisation that it’s lashing it down too much outside to want to do anything but sit, listening to the rain hammer off the top of your metal roof. Not so usually, it’s because you’ve left a trail of bodies in your wake. Such is the concept of Sightseers, a gory but down-to-earth British comedy-thriller that follows the tracks of new couple Chris and Tina as they caravan through the northern English countryside, causing chaos and violent deaths as they do so. Laugh-out-loud funny, shocking, but somehow still hugely relatable, Sightseers parodies a British cultural ‘type’, and their favourite type of holiday, down to a tea-flask. Co-writers and stars of the film Steve Oram and Alice Lowe, and director Ben Wheatley (Kill List), spoke to us about the dynamic behind the film, and what drove their characters to conjure up their own (incredibly warped) moral hierarchy.

Coming from Yorkshire, the first thing I noticed about the film was the familiarity of some of the character traits, apart from the killing, of course. How much of the script was based on personal experience?

Alice: A huge amount of it. We’re both from the midlands, and we’d both always gone on camping holidays when we were kids. It was sort of inspired by our parents in a way, and the quarrels they’d have in the car. ‘Carguments’, as my sister calls them, because you always argue more when you’re in a car, it’s a stressful environment. Then when we started writing the characters, we went on a research trip. A lot of the characters come from us really, and how we interact with each other – and I don’t think we’d have found that out if we hadn’t gone away in a caravan together for a week.

Steve: You find a lot out about each other when you’re in a metal box together, don’t you. Whatever sort of metal box that might be. It’s like being in a strange sort of movable prison, where you get to know what’s going on inside the other person, physically and emotionally.

Package holidays have kind of overtaken the caravan trip as the predominant form of British getaway. Is the caravan due a comeback?

Ben: I think young people will always knack off somewhere else, to be far-far-away from England to commit their ‘crimes’. But as you get older, you don’t want to travel, and you want to take all your stuff with you. I live in Brighton, and go camping about six or seven miles from our house, so if it goes wrong, I can just go home. It’s brilliant. [laughs]

Alice: There’s also something protective about a caravan – I think that’s why older people like it, because you feel like you’re safe and you can lock it away. Young people like tents in that sort of Glastonbury free-for-all way, and then the first time you have a bottle of vodka nicked from your tent you go, ‘right, I need more security’.

Steve: That, or when you find piss flowing through your tent like a stream.

A caravan’s colonialist in a way, because you’re bringing your personal environment around with you and imposing it on a place, instead of becoming a part of a place.

Alice: That was what was key to the characters, because I think at one stage we were asking ourselves if they’d really hoik a caravan around, or if we should we do it in an RV, or have them just camping, or staying in hotels. But we decided the caravan is something really specific to Chris’s character. He’s looking for a homestead, and staking his claim.

Steve: It’s about the frontier spirit in a weird way, for Chris – he’s got all his stuff on his back and he’s pushing his way forward, imposing himself on the UK.

Alice: And then Tina is like a child, really, so for her it’s like a Wendy House that she can fill with all her personal crap, and play mummy and daddy in. In this weird little space, that isn’t really a house at all.

Steve: But neither of them have ever really had their own house, so they’re making home for the first time.

Alice: It’s absolute freedom for them.

So Chris is all about pushing his worldview onto others, including onto Tina, who’s very receptive to it at first. But Tina’s a bit more open and random, isn’t she?

Alice: Chaos factor! Well I think that’s what was interesting about bringing the two characters together. When we went on holiday together… well… it is kind of just an exaggerated version of us, isn’t it, really! [laughs]

Steve: I had to do all the planning, and the booking of the caravan, and the deciding where to stay – all that sort of thing.

Alice: It’s kind of funny as well, because Chris has these aspirations to be this great artist, and a lot of serial killers think they’re creating this work of art that’s going to make them remembered. And then Tina’s actually better than him at it, ironically. Once he’s shown her they can break all the rules, she develops this ‘fuck it, let’s do what we want’ attitude. She has an epiphany that’s completely overwhelming. I think she’s more of a psychopath than Chris in many ways. She has a lot of pent up anger that’s waiting to be unleashed in this Carrie-style scenario; she knows no bounds, whereas Chris is more of a restrained animal.

Steve: Not that restrained! [laughs]

Alice: No, but I think Tina would destroy the universe if she had her way, though.

Steve: She would, yeah.

There’s a strong link, with Tina especially, between sexuality and killing as well. The clothes she wears in the film become more feminine and confident as it goes on, and as she becomes more sexualised, she develops the assertiveness to go off on her own path, instead of just doing what Chris does.

Ben: It’s like the idea of the ‘muse’ isn’t it. He dresses her up like a doll almost, but then she takes that ownership off him, and he really ends up becoming the muse to her. She’s the *real* creative one, and he’s just following her, going ‘what’s going on, what’s happened’!

Alice: Well, that’s interesting, because I’ve got a slightly different take on it. There’s this thing that I sort of perceive from my mum and dad, and other couples, that if you’re not going to be alone for the rest of your life, then you’ve got to make a compromise, and see what annoyances you’re willing to take on. And you often find those out on holiday, it’s like a microcosm of a relationship. The Sightseers trip is about them finding out their bad habits, and unfortunately, Chris is a killer. That’s quite a bad habit – are you going to put up with it? Chris finds out a lot about Tina as well, but I think he decides that although she’s a bit of a nightmare, he’ll sacrifice it all in order to have a partner in crime. Then Tina goes, ‘nah, I don’t feel like it’.

Did you look at any famous serial killer couples while you were researching?

Steve: Yeah. All of them. We were especially interested in Fred and Rose West obviously, who were chillingly assimilated into their sort of social scene.

Alice: I think we were very worried initially about seeming flippant about what we were writing about, because it’s such a serious subject. We wanted to make sure the characters were believable, and that you would know that, although they’re normal to some extent, there’s stuff that’s happened in their background that makes them not normal. They’re not like us, they’re really damaged individuals. We wanted to make sure we got the psychology really right, and believable – what’s pushed them to this point, and what little cog has broken in their heads to make them think that this is acceptable? I think one of the challenges to the audience is to make them think about why people do this kind of thing. It is a moral film, it is showing that it’s wrong – they get their comeuppance in the end, and that was really important to us.

I find it really interesting how much the murders become integrated into the landscape as well. Even the murder weapons Chris uses tend to be very earthy – stones and sticks – then Tina tends to push people off heights.

Alice: Ah the push. The earliest form of murder.

Ben: It’s a timeless technique. There was a scene that was cut out in which someone gets killed with a kettle as well.

Alice: That’s quite a Victorian method.

But there’s a very kind of pagan aspect to it – the landscape consuming us, and the return to nature, which we saw a bit of in *Kill List* as well.

Ben: Yeah. It’s like a time thing. They’re existing in the past and the present at the same time, and they kind of travel backwards and forwards through time throughout the movie. They go to these old industrial places that are very nostalgic, like Crich [Tramway Museum], which celebrates these forms of transit that no longer exist.

Alice. We had to suffer the elements when we were filming up there as well, which was good really, because you don’t want to make a film about the British landscape and not include the weather. Because, like…

…it’s the most quintessentially British thing, isn’t it.

Steve: And Irish, judging by this.

Alice: Yeah, you’ve got *weather* as well, I hear.

Ben: They don’t have it anywhere else, though. It just swirls around these islands.

There’s a weird moral hierarchy for humans and nature as well. I remember at the start of the film, Tina says ‘you’re not a friend, you’re just a relative’, then later on, Chris professes that ‘an English oak won’t stab you in the back’. So there’s a kind of hierarchy, with relatives at the bottom, then friends, then maybe animals, and nature at the top.

Ben: It’s a triangle. The motif of the triangle runs throughout the whole film, that’s why Chris ends up wearing a triangle jumper at the end.

Alice: It’s very Adam and Eve-like as well. They’re trying to boil everything down to the most essential and important things, and as they become more obsessed with each other, it becomes more primal.

Steve: She’s the last person standing. She wins. Tina’s mother is the winner, and Mother Earth is the winner. But these two? They’re just fucking nutters,

Finally, if you could take anyone on a caravan holiday, who would it be?

Alice: Bear Grylls. Someone who’s really good at it.

Ben: He could cook some chicken pasta.

Alice: Someone with a yacht, preferably.

Sightseers is in cinemas now.