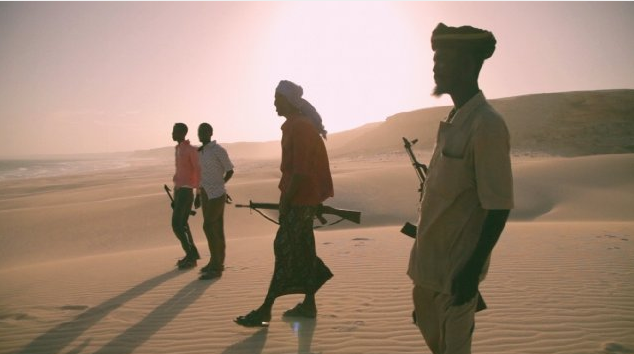 Tommy Pallotta and Femke Wolting together have made The Last Hijack, which explores piracy in and around Somalia through a combination of animation and documentary and is amongst the many exciting experimental films to be featured at this month’s rebooted Darklight Festival. Totally Dublin picked the brains of Pallotta ahead of their film’s appearance at the festival.

Could you briefly explain your background in the film industry?

Tommy: I was always interested in films, but didn’t really consider it a possibility. Luckily two things happened, I got a degree in Philosophy, which limited my career choices, and I met Richard Linklater and helped him out with his first movie, Slacker. This was significant because he was also from Texas and it showed that a total outsider could make a movie and (more importantly) get it seen. After that I felt like it was possible and I got serious about making movies. I made my first feature on 16mm for about $25,000 and it was every penny I could manage to beg, borrow, or steal. I received some traction and distributor interest, but I was not the next Tarantino. Burned out, I looked around for a different entry point and teamed up with a software writer and animator and we started to experiment with a hybrid of animation and live action. This culminated in the technique that was used in Waking Life (2001). Since then most of the work I have done has been driven by technology as a storytelling tool and some kind of hybrid format.

How did you come to be involved in the project? And what specifically interested you about the subject?

About 5 years ago we read some articles that really opened our eyes to why the pirates were doing what they did. The mainstream press was covering this fascinating subject without really presenting the Somali point of view. Pirates are a resonant archetype and the mystery of their motivations was captivating to us.

Can you explain the method used for the animated sequences?

We knew we wanted something different, we just didn’t know what that was. We paired up with a Dublin based animation company, Piranha Bar, and we started to experiment. The main problem with animation is that it is seen primarily as a format for children and we looked at how we can make something for adults that would blend seamlessly with documentary footage. We knew that the color palette would be important and we were searching for a style. After some initial experiments, we found a Dutch painter and animator and asked him to do a few tests. When we saw the first images, we knew that the palette and the look was something that we could bring to life within an animated universe that could live side by side with documentary footage. The basic idea is that we bring oil paintings to life.

What was your conceptual process in deciding to use animation — the animated space is one where metaphor, and almost dream-like qualities, abound — to tell part of the story?

Initially the animation was to be used to recreate or give access to what we were unable to film. What we found in the process is that the animation can do that, but also much more. As we were editing the movie, we found a way for the animation to represent not only the past or present, but also the inner life of our main character.

Do you think that maintaining a tension between documentary-like ‘objectivity’ and subjectivity was necessary to tell the particular story you wanted to tell?

There are many ways to tell a story and I am sure this one could be told without the objective/subjective tension, but it is what interested us as storytellers. The Documentary genre has the idea that it is objective so we are challenging that notion somewhat. We view this project as a Hybrid: we played with the object footage and the subjective animation, but also played with the notion of story and structure. We edited it as a narrative feature, which also creates a nice tension with the doc footage. We tell many types in multiple genres and formats, so for us to blend them is natural and fun.

A question somewhat related to Ireland… An acclaimed recent multimedia exhibition about DR Congo by Irish artist Richard Mosse has received criticisms of reproducing exploitative colonial narratives and aestheticising conflict: what is your feeling about the problematics of representation in sites of past and present conflict, with respect to geopolitics, having made this film in Somalia yourselves?

Good question, not comfortable answering this. Last Hijack is not a political story; it is ultimately a story about family and survival. We asked the question to ourselves: what would you do to survive? We were interested in what a Failed State is and how it impacts a family. This is a window that allows a universal story to be told. We consciously steered clear of a straightforward reportage or political statement.

Blurring the lines between fiction and documentary filmmaking seems to be increasingly popular: are there any filmmakers working in this tradition, past or present, who you particularly admire?

Do you have any advice for young filmmakers or aspiring producers, to get ahead in the film industry?

It is an exciting time to be a storyteller because it is in flux. The emerging platforms and technology are disrupting the stranglehold that traditional media has had. Audiences can only respond to what they are given a choice to and right now there are ways around the bottleneck of the media oligarchy. There is an opportunity to really disrupt traditional distribution channels and connect intimately with a hungry audience. The challenge is one of energy and resources, not only do you have to be a storyteller, which are a difficult endeavor, but also a distributor, publicist and entrepreneur.