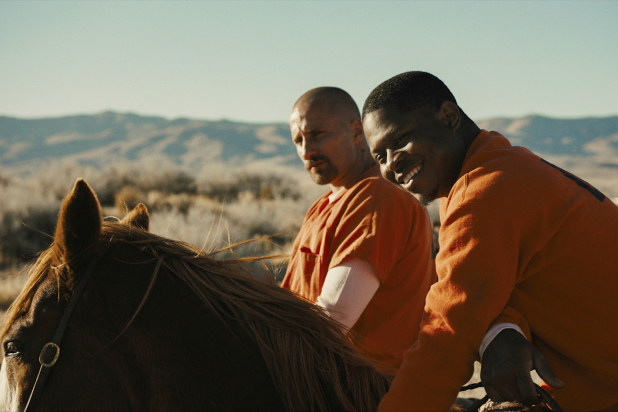 There’s nothing really new about the ‘man in prison seeking redemption’ film or the ‘man bonds with horse’ film but entwined with Matthias Schoenaerts at the helm, The Mustang makes for an engrossing watch regardless.

Following a fine 2017 double helping of equine dramas – Lean on Pete and The Rider – The Mustang is perhaps a more straightforward film than those two. Matthais’s Roman needs to fill out time. He has a life sentence to do it. He is listed to participate in a rehabilitation therapy programme centred around the training of wild mustang. Each man has six weeks to break their horse before they are auctioned off.

There are, of course, complications and two smaller subplots but, by and large, The Mustang never veers off its set course and it’s all the better for it. This is a steady and assured debut guided with a mature hand by de Clermont-Tonnerre. Schoenaerts is the star of the show; a man who looks the part, all bundled intensity and seething fight and rage. His taming in conjunction with the feisty mustang is a worthy struggle on the screen and the two make sense as a pairing.

The Mustang is a fascinating film to watch and its back story, based on a current and apparently very effective prison therapy programme, makes it even more so. Not every film has to be cast out as a truly original idea to prevail these days. As long as the project is sincere and the route taken objectively works, then I’m all for it. This is a meaty bit of drama and a fine addition to the succession of man and beast partnerships on screen.