An Afternoon With Todd McGowan 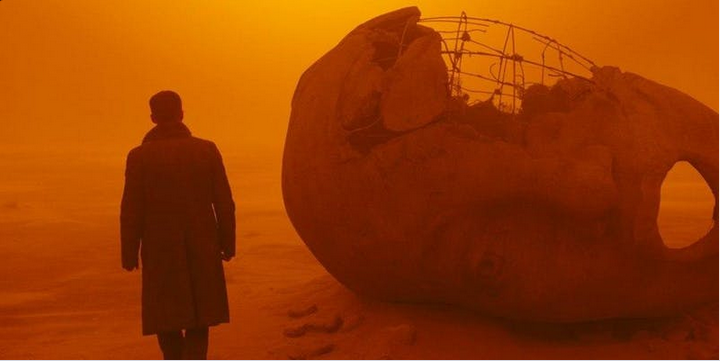 Capitalism, Cops, Psychoanalysis, and Politics… What has Bladerunner 2049 got to do with Ideology?

Don’t miss the chance to find out when Todd McGowan, associate professor of Film Studies at the University of Vermont gives two talks at DCU (School of Nursing, Room HG22 on Saturday 19th May (2-6pm). Tickets here

The event which is entitled “An afternoon with Todd Mc Gowan” is arranged and presented by the organisers of the Irish Psychoanalytic film festival (now in its 9th year, and hosting none other than the inimitable film, psychoanalysis, and politics philosopher Slavoj Žižek at its 10th festival in 2019). This will be the first opportunity to hear Todd McGowan speak in Ireland. Engaging, witty, and renowned for being a brilliant speaker, Todd McGowan is – apart from Žižek – probably the most eminent and prolific writer at the intersections of psychoanalysis and cinema, and psychoanalysis and politics at work today. At this event there will be the chance to hear Todd speak about psychoanalysis, film, and politics, in two talks, each of which will be followed by Q&A and discussion. The first of these will be on Paranoia and Populism, and this will be followed by Between the Capitalist and the Cop – the Path to politics in Blade Runner 2049. 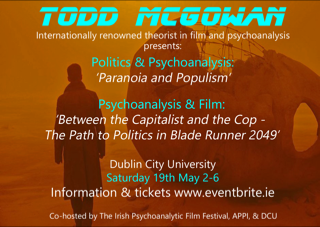 Todd is described as “brilliantly lucid” in his interpretations of film text and psychoanalytic theory; and his books are regarded as “indispensable for anyone interested in the interpretation of films”. He has published over 32 books including The Real Gaze (2007), The Impossible David Lynch (2007), The Fictional Christopher Nolan (2012), Capitalism and Desire:The Psychic Cost of Free Markets (2016), and Only a Joke can Save us (2017).

Together with Ryan Engley, Todd runs a podcast called Why Theory? a series which tackles such hot topics as Ideology, The Oscars, Freud, CGI, The Last Jedi, and anxiety. Its film theory Jim but not as we know it!

Here’s the link to episode 2 of the Podcast series to get a flavour of what to expect from Todd.

If you’re left feeling hungry for more of Todd, or more on psychoanalysis and film, Todd McGowan and two of the organisers of this event Olga Cox Cameron and Carol Owens will be speaking at the Freud/Lynch Behind the Curtain extravaganza which is a 2 day conference exploring the cinema of David Lynch through a psychoanalytic lens in London the following weekend (26-27th May).