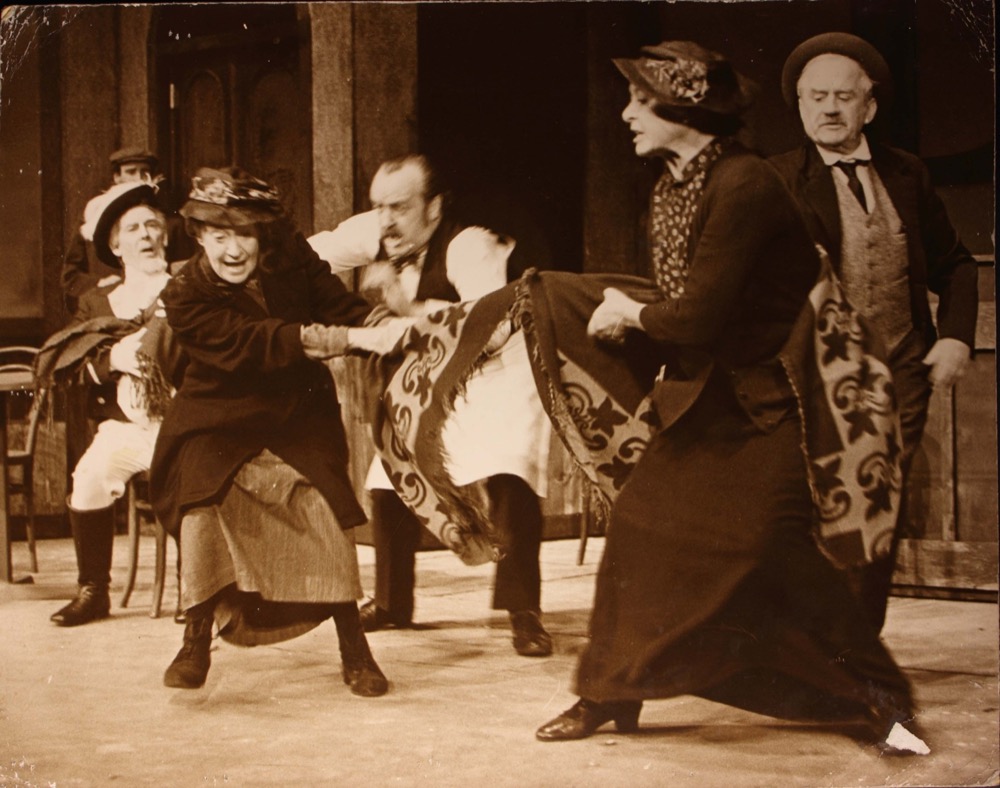 Undressing the character-filled contents of the Abbey Theatre’s costume archives.

“Perhaps the most bizarre tale is that of one dress being attacked – not by a canine, but by a cactus”

If frocks could talk, the fibrous residents of a certain Dublin 11 warehouse would find themselves in a continuous chatter. The corner of Finglas Business Centre may not be the first place you’d search for a costume emporium and yet, among suppliers of window blinds and electrical wholesalers, the Abbey Theatre has housed over 30,000 creations across a multi-tiered Aladdin’s Cave. If anything, this archive’s semi-clinical surroundings only add to its internal charm: before stepping inside this windowless fortress, inaugural visitors cannot dream of imagining the visual splendour that lies ahead.

The custodians of the Abbey’s Costume Hire department (a compact team that encompasses Kerri Morris, Eimear Farrell and Ailbhe Kelly-Miller) couple their caretaker roles with rich backgrounds in costume design, each having racked up a variety of credits across both stage and screen. From studio sessions to backstage supervising, their skill-sets prove indispensable for keeping the in-house collections as streamlined as possible.

The archive’s sartorial timeline starts in the 1500s with King Lear (a Gabby Rooney production characterised by impossibly-heavy garbs) and journeys in considerable detail up to the present day. While the Abbey’s most esteemed collaborators see their costumes preserved here, a constant stream of donations arrive from private collections. “We’re very full up at the minute,” laments Kelly-Miller, gesturing to a yellow hat-case that had arrived full-to-the-brim with furs, “but it’s hard to say no.”

In less capable (or compassionate) hands, such an extensive archive could generate an atmosphere too intimidating or inaccessible for nascent designers. The buoyant enthusiasm of each Abbey conservator disarms such fears, however, with costume connoisseurs and industry neophytes equally welcomed. While stock requests for stage productions reign during this time of year, everything from music videos to commercial photoshoots can be catered to. Rather than operate under a conveyer-belt ethos, both repeat customers and newcomers are given an appropriate time-slot to roam the warehouse – allowing them sufficient breathing space to pinpoint their creative choices without the necessity of hovering personnel. 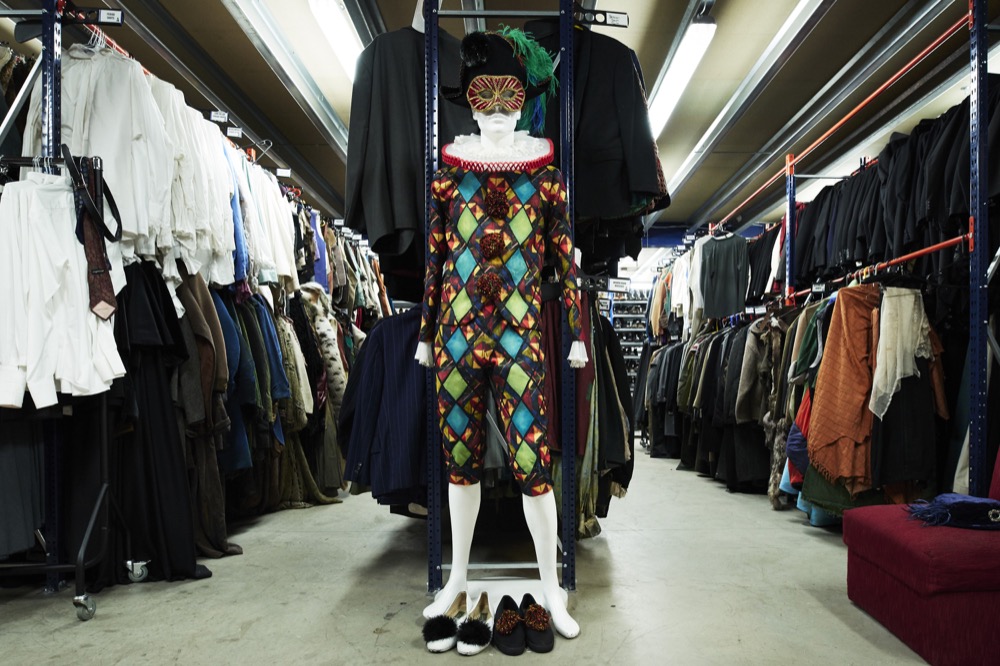 For texture enthusiasts and colour hunters, the space is nothing short of a feverish dream. On the entrance level, I spot devoré velvet in vivid aquamarine that has been fashioned into huge 17th century sleeves – a “very Three Musketeers style,” Kelly-Miller remarks, “from a time when menswear was far more decorative than womenswear” – while the colourful vintage section on the upper floor includes lavish dresses from Anna Karenina. “Some of these were bought in vintage shops around Dublin or sourced by Sarah Bacon, who was the designer,” recalls Kelly-Miller, as we examine one floor-length floral piece piped with ivory lace. “I remember the studio being covered in the most amazing images of 70s women… feathers and fluffy hats and platform shoes. I even started coming into work in 70s styles!” Eclecticism permeates each abundantly-stocked aisle: for every multi-hued magician’s cloak, whose purpose ranges from Celtic productions to Harry Potter shows, there’s a range of utilitarian dress staples. For every jewel-dripping, ankle-dusting gown from The Portrait of Dorian Gray, there are reams of cherry-red lace and PVC from a recent production of Alice in Funderland.

While the Abbey’s collection of pristine costumes are attention-grabbing, perhaps the most intriguing rail of all is that of their skillfully-disheveled garments. “We have a breakdown artist in the Abbey called Sandra Gibney – she’s responsible for making costumes look old and distressed,” says Kelly-Miller. “In theatre productions, the details have to be exaggerated – you should be able to see [the imperfections] from the back seat. Sometimes customers might say to us, ‘oh, this one is damaged, can we get a discount?’ But, if anything, that item is probably more expensive! There’s been so much more time put into it.” There’s no doubt that the costume custodians are fervent believers in sustainable practices, vowing to keep every item they’ve accepted into their fold and championing the art of repair in the process. “It’s quite a nice answer to the fast-fashion crisis, because we’re seeing things get made from scratch by talented makers who are working on the pattern, the design, then building it, breaking it down… and then it comes out here to live forever. It really does get used – considering the budget that goes into each show, it’s great that it keeps on living after the production. It’s great to give purpose to it.”

The throwaway culture of consumer fashion is widely documented, but in the world of costume – especially in contemporary shows – it’s not uncommon to hear of brand-new, shop-bought clothes being discarded. “Instead of going to Penneys and spending €50 on the outfits,” Morris suggests, “they can come here, spend less and the pieces don’t look too stiff or too pristine in the way that, say, a newly-bought t-shirt would.”

As with any costume archive of this calibre, there are a handful of horror stories involving “mishandled” garment and accessory hires. Any requests for fancy dress or food and drink events have to be turned down: “we go through quite a big checklist with customers to ensure it’s for a performance,” says Kelly-Miller. “Unfortunately, a couple of things have gotten badly damaged. Some of our period dresses were designed by the likes of Peter O’Brien or Joan Bergin, and they’re really important archive pieces. If they get damaged, it just breaks your heart because you can tell how much time was put into them.” Kelly-Miller gestures to one hat that was mauled by a dog, its teeth-marks still puncturing the delicate textile. “When something like that happens, there’s nothing much we can do. The customer would have to pay for the damages, and we’ll repair whatever we can. In this case, I’d say we put the money towards buying a new hat but held on this one as well. We’d never throw anything out, it could be used for something.”

Perhaps the most bizarre tale is that of one dress being attacked – not by a canine, but by a cactus. “Everything was ticked off our checklist, but then the actor just got caught [on one] and the whole thing was shredded.” 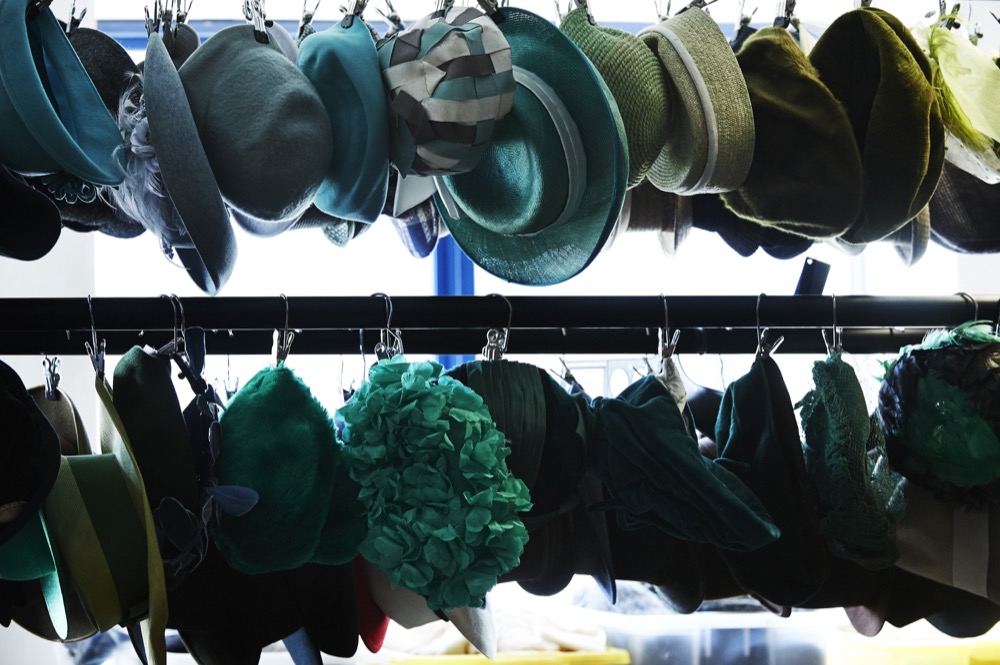 The worlds of fashion and costume may be intrinsically tied, but the costume industry goes through more trend cycles than might typically be expected. According to Kelly-Miller, one of the hottest items to hire right now is a pregnancy bump. The craze started “just after Anna Karenina, because we needed to buy 4 pregnancy bumps for that show to represent different stages of pregnancy. As soon as we had them after that, I don’t know what happened but all of a sudden, people went wild.” These cyclical ebbs-and-flows prove just how strongly costume designers keep their fingers on the pulse, responding to cultural changes and historical events with equal veracity. Much like fashion, the sector doesn’t follow its own orbit – one look at Alessandro Michele’s Gucci collections will prove that theatricality is never far removed from the fashion realm.

From neon-coloured life jackets to lace gloves in impossibly-perfect nick, this costumier’s paradise covers an entire spectrum of conceivable needs. Rather than letting a mountain of desirable garments gather dust – or worse still, end up at landfill – the wider arts community keeps these gems in perpetual circulation. The department’s celebration of slightly-worn, slightly-aged style is something that sartorial consumers could glean a great deal of inspiration from, helping to unravel any unhealthy mindsets. For prospective costume designers looking to pay a visit, one word of caution holds true – any cactus-themed shows will be turned away at the door.

The Abbey Theatre Costume Hire department is located in Unit 42/43, Finglas Business Centre, Jamestown Road, Dublin 11, and is open on Tuesdays, Wednesdays, Thursdays and Fridays from 10am – 4:30pm by appointment only. Book by calling (01) 87 97 310 or emailing costume.hire@abbeytheatre.ie