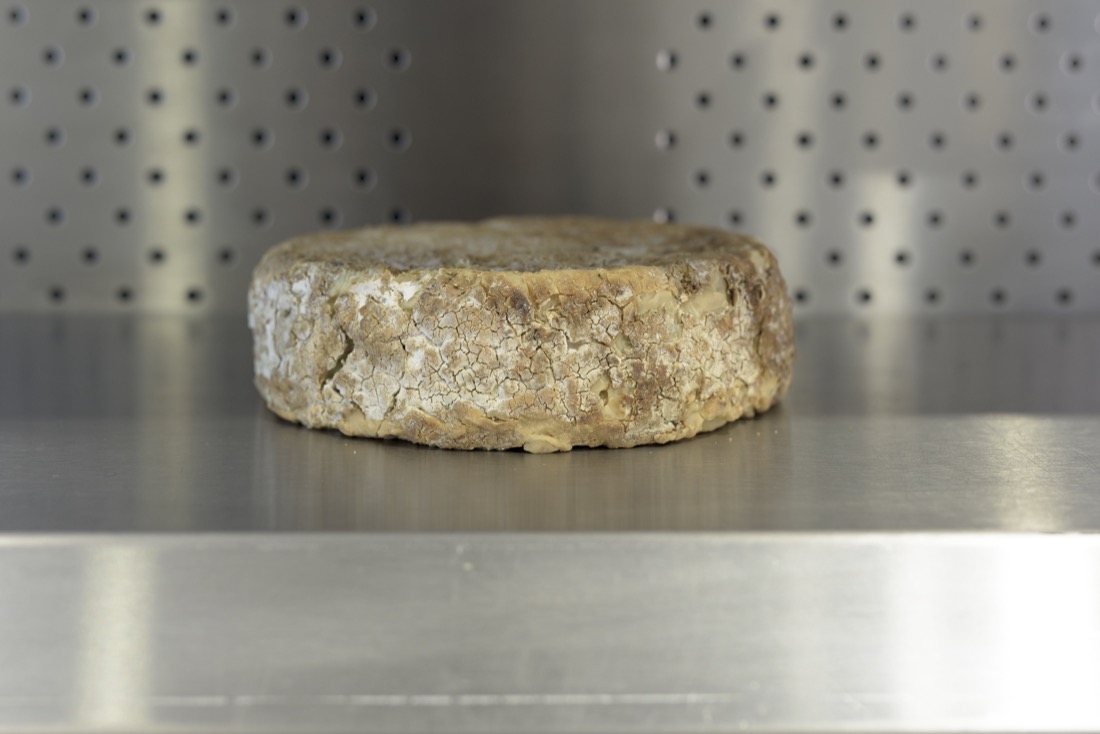 Avril Corroon has created a work that combines organic horror with late capitalist dystopia in her latest exhibition.

“People talk about Ireland and the personality of the people, but there’s not much personality in Dublin. It’s just been extracted, chopped up and sold off in mini vignettes.”

When you walk into Spoiled Spores, don’t worry. It’s supposed to smell like that.

At a brief glance, Avril Corroon’s new exhibition looks like a selection of particularly fetid cheeses and nothing more. But when you look on the shelves you see the black crud, the crusty brownish-yellow textures, and you realise this isn’t your average gorgonzola.

That’s because Corroon has created these cheeses from mould found in apartments that represent the nadir of the housing crisis. Many of the cheeses are made from ‘produce’ in London flats, but she’s also used mould from Dublin properties, insuring that at least part of the exhibition is locally sourced.

The concept came to Corroon’s last year, fully-formed. “Sometimes ideas come to me in a way that seems laughable and not possible,” she says. “The magical thing about being an artist is that sometimes you get to do these weird things.” 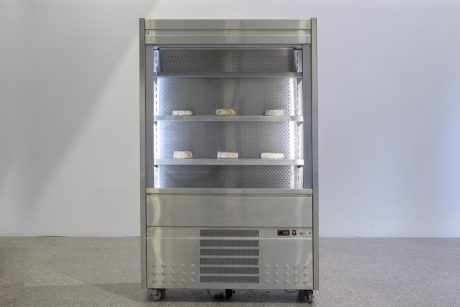 Corroon has been based in London for the last two years, and noticed a lot of artisanal cheese shops in areas that had been gentrified. When she started the project, she went through many articles and YouTube videos from artisan cheese makers, who continue to re-post her work, “It’s really funny because they don’t actually know that mine is toxic and I’m kind of making fun of them all the time!”.

A lot of mould was needed in order to depict the epidemic of poor housing and neglectful landlords in London. Corroon reached out to people in online communities like Freecycle, which members can use to get rid of unwanted furniture and the like. But, instead of looking for some shelves, she was asking for free mould. 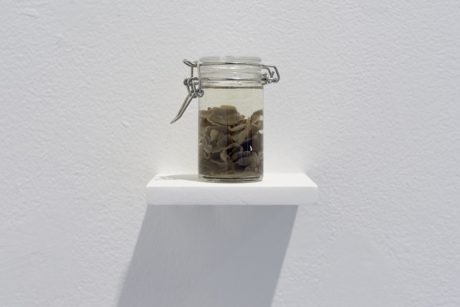 Corroon initially began crafting the cheeses in her apartment, but soon moved the work to her studio after giving herself and her flatmate’s boyfriend “just a little bit” of food poisoning. The process has been extremely long and particular – even if the resulting cheeses are completely toxic – with one piece taking around two months to mature.

While she was uncertain of how the cheeses would look when they emerged from the pot, Corroon gave careful consideration to the fridges that would display them. “They’re such an imposing and large thing in the space, so I really needed to incorporate them into the thematic of the artwork and make it really work.

“I got commercial fridges with their own lights that remind me of buildings. The tall one with the glass is more of a high rise building, and there’s one large open deck chiller that reminds me of a council house block.”

“We think of every product being based on the exploitation of others, but by pushing this in the artwork to an absurd level, it actually makes you think of it in a way you usually don’t. I think they appear quite abject. They do successfully look like cheeses, but they also look quite ill so it’s making you think about these bodies in these apartments.” 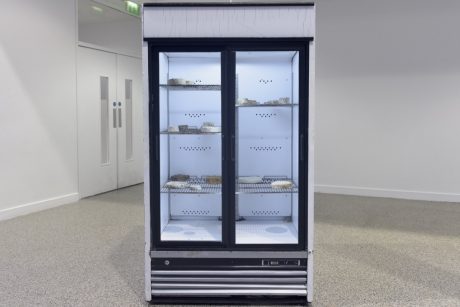 The finished pieces are as striking as they are unpalatable, slyly funny but also repellent to our senses of smell and sight. Corroon has created a work that combines organic horror with late capitalist dystopia, human beings reduced to rank consumables for the upper classes. Soylent Green Cheese is people.

Corroon came to Dublin years ago to study in NCAD, and as much as she loves the city, it’s unfeasible for her to live here as an artist (or anything else for that matter). In fact, she reckons the housing crisis is even worse here than it is in London. “Exporting artists is nearly a part of Irish culture, but it’s not just artists, it’s everyone. In Ireland, you’re throwing hundreds of quid in a bin [on rent] and there’s no nightclubs, studios are shutting down and all your friends are moving.

“Nothing’s cherished. Places like Moore Street that have a cultural or historical significance seem to be eradicated. People talk about Ireland and the personality of the people, but there’s not much personality in Dublin. It’s just been extracted, chopped up and sold off in mini vignettes.”

Accompanying the cheeses are two different video works. The titular Spoiled Spores shows the apartments that Corroon has taken mould from. They offer intimate snapshots of people’s lives in these cramped, damp flats. Corroon intercuts these shots with inserts of the cheeses against white backdrops, surrounded by sumptuous food. They’re equally inspired by M&S ads as they are by the works of filmmaker Peter Greenaway.

The other video piece, Latte Art, is something of a peculiar bedfellow; a quasi-confessional video diary of Corroon working in an unnamed art gallery café in London. With a camera hidden in her belt, Corroon captures candid footage of her serving artists and curators. Through voiceover, she shares her frustrations about being on the periphery of a world she desperately wants to be part of. Corroon says that she is playing a character of sorts, heightening her frustrations and anger to a comical degree, but these thoughts are familiar to any young artist trying to get their foot in the door. 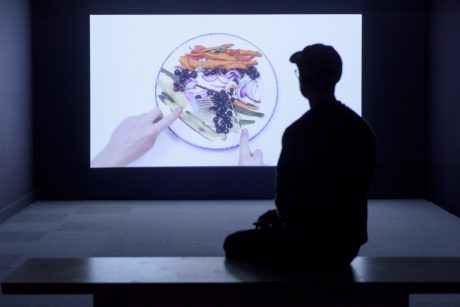 If there’s one thing that links these two video pieces, it’s the way in which Corroon uses food to bring a new perspective to capitalism. In Latte Art, she recreates famous works of impressionist art through foods that are sold at a high price.

“There are jobs that are specifically to go to cafes and do the blackboard design. It’s really pitiful and sad, because I’m sure anybody doing those jobs is probably also an artist that isn’t making that much money and has to spend time doing these petty, filtered out, versions of what art and creativity is. It’s like making the latte art, making the beautiful love heart or the panda in someone’s flat white and then putting a lid on top of it!”

As the interview comes to a close, Corroon brings me to a table that contains a leather bill holder as well as a glass bowl full of mints. I stare at the piece, uncertain of what it is I’m seeing. Are the mints made from mould too? Washing powder? Whittled down urinal cakes?

Corroon senses my reservation. She picks ups a mint and pops it in her mouth. “I’ve just left these here. People can take a mint if they’re bold enough,” she laughs.