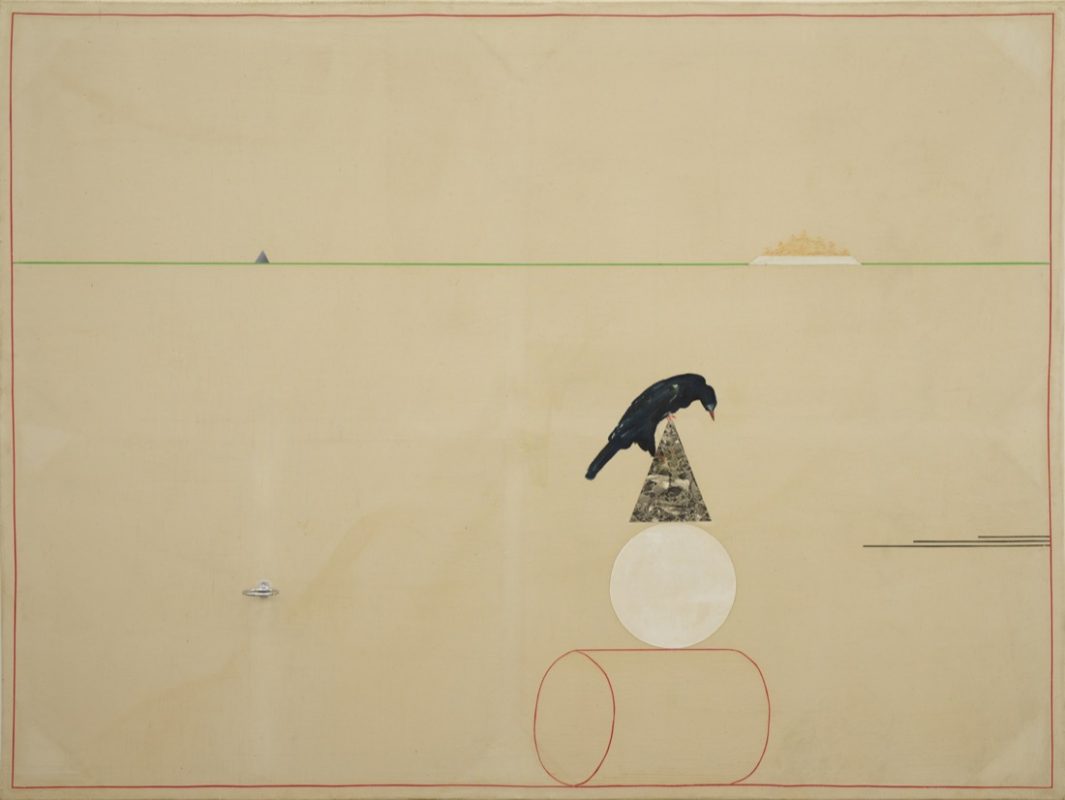 Derek Jarman’s radical legacy as a painter, writer, set designer, gardener and political activist is explored in his largest retrospective to date. IMMA’s Seán Kissane who curated tells us which decisions were made in this attempt to define his output and impact.

For most people, Derek Jarman is defined by his lush cinematic output from the mid ’70s onwards, explicitly queer work that challenges hetro-normative readings of Shakespeare, biblical stories and the life of baroque painter Michelangelo Merisi da Caravaggio. 25 years after his death from AIDS-related illness, PROTEST! shows us that this barely scratches the surface.

The retrospective is curated by Seán Kissane, no stranger to the art of the retrospective. By his own admission, he came into the project knowing “the same amount of Jarman as everyone else. Seen the films, had a sense of what the political activity was like, read some of the memoirs. I was not a specialist.” So, what was it about his work that convinced Kissane to spend three years sifting through Jarman’s gargantuan output?

“I’m interested in those figures that seem really obvious when you’ve done them, but for whatever strange reason, they’ve been neglected. And Jarman fits into that, because no one can imagine what a Derek Jarman painting retrospective would look like.”

That’s partly because of a legal case which meant that many paintings weren’t available to be seen until five years ago. But another reason is that Jarman is all too often reduced to his filmography. PROTEST!’s mission statement is to draw attention to a wider array of his practices, such as his painting, writing and his political activism. 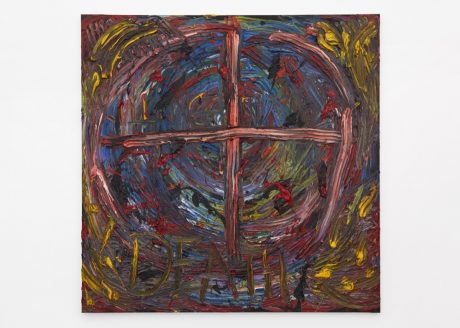 Walking through the exhibition, the first thing you notice is the sheer scope of the work. Sparse geometric paintings hang next to primitive Super8 film work. Chiaroscuro paintings are a stone’s throw from his mixed media works, which use cutlery, glass and other detritus. Elaborate set designs for Ken Russell’s transgressive historical horror drama The Devils are placed next to a screening of Jazz Calendar, a Royal Ballet performance featuring Jarman’s work. It’s a dizzying selection of pieces that created quite a few headaches for Kissane when trying to find a coherent through line.

“The show went through at least ten layout changes. One of the ways of approaching it was to try and be thematic. Because you could pull alchemy out as a subject for example, and you’d find an early painting, a graphic painting, a film reference. You could have made that a room.

“But, I thought that as this was the first retrospective in 23 years, I had to give the audience a simpler way in. So, I decided to go chronological and change the media. I suppose what I’m offering is a taster and I’m trying to give three digestible ideas with each room. Because I think – I hope – that this will be the beginnings of other Jarman projects.”

There’s one notable break in chronology at the beginning of the exhibition, which pairs Blue, Jarman’s last work, with a self portrait he made in his teens. For Kissane, this establishes that from an early age, Jarman was skilled at likeness and naturalism, and to contextualize his ensuing work as a journey away from figuration. Blue is, of course, Jarman’s famous final film, a series of voiceovers and musical pieces set against an unchanging blue screen, a complete void of image made when Jarman’s eyesight was failing due to AIDS-related complications.

Blue serves as a microcosm of Jarman’s creative impulses. The need to create still burned bright even as his sight had begun to leave him. As Kissane notes, his artistic output doubled after his HIV diagnosis in ‘86. He made a feature film a year in his last six years. “There is making on borrowed time,” Kissane says.

While Jarman’s politics are always present in the work, they become much more pronounced in the wake of his HIV diagnosis, which leads to some of the most thrilling and provocative pieces in the exhibition. The ‘Black Paintings’ are a series of paintings that reinterpret Caravaggio’s Renaissance work as explicitly sexual images between men. Some of the paintings like ‘Irresistible Grace’ carry the formal weight of the inspirations. Others seem like a great artist doing his equivalent of dirty school boy drawings.

“At the time, Margaret Thatcher legislated a thing called Section 28, which prevented public money from being used for the promotion of homosexuality,” Kissane explains. “That means you can’t really educate about HIV/AIDS, because the two things are linked. The level of ignorance about AIDS was such that people thought you could get AIDS from a toilet seat, a coffee cup.”

“It also means that if you’re making any kind of queer art, you can’t get any funding, because nobody quite knows how to interpret the legislation. So, what happens when you put, as you say, ‘dirty school boy drawings’ up on the wall of the Edward Totah Gallery in the environment of Margaret Thatcher? He’s making this explicitly queer exhibition at a time when the climate is becoming increasingly repressive and homophobic. What’s remarkable about those works is the fact that they operate on an art nerd level while completely functioning as social protest.”

Some of the most striking works, the ‘Slogan Paintings’, come near the end of the exhibition. By this stage, Jarman’s ailing health meant that he needed to work with two assistants, telling them which colours to pour on the canvas. When they’d prepared the canvas, Jarman would carve a message out of the paint, often inspired by tabloid headlines about HIV/AIDS.

The finished works are an unflinching depiction of terminal illness, compounded by crude messages like ‘Infection’, ‘Fuck Me Blind’ and ‘Dizzy Bitch’ that are etched into the layers of paint. Jarman imprints his physicality into the ‘Slogan Paintings’ in a primal manner that stands in stark contrast to the precise work found earlier in the exhibition. 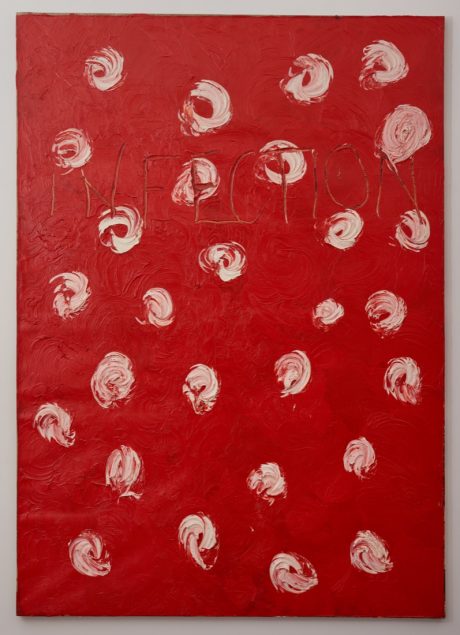 Nonetheless, the exhibition ends on an optimistic note, as the viewer is brought into a room about Prospect Cottage, which Jarman used as a retreat from London. And as Kissane is keen to remind me, the audience can always end with Blue, as they have to walk back through the entrance. “It’s important to always end on a hopeful note with Jarman, because he says himself, ‘Shed no tears over this work.’”

After the exhibition’s run in IMMA, the pieces will be brought to the Manchester Art Gallery where it will be re-hung by Fiona Corridan and filmmaker Jon Savage. There they will launch an exhibition book – 300 pages and 18 authors – which is the first book that compiles all of Jarman’s practices into one volume. Even then, Kissane says, extensive sections of his practice have been left out.

After viewing hundreds of his works over the course of three years, I’m curious as to what has been Kissane’s biggest takeaway on Jarman himself. He takes a moment to consider.

“That he couldn’t have done any of it if it wasn’t for what he was like as a person. It was his openness and his kindness and generosity and his curiosity, which I think was his most defining trait. It brought so many people into his life that wanted to work with him, who wanted to share their imaginations, and amplify his. It wouldn’t have been possible if he didn’t have that spirit.”

A book edited by Kissane and designed by Niall Sweeney accompanies the exhibition and includes excerpts from Jarman’s own writings, short interviews with friends and collaborators and newly commissioned texts from a wide range of contributors including John Maybury, Peter Tatchell, Philip Hoare, Sir Norman Rosenthal and Olivia Laing. It will be published this Spring by Thames & Hudson.