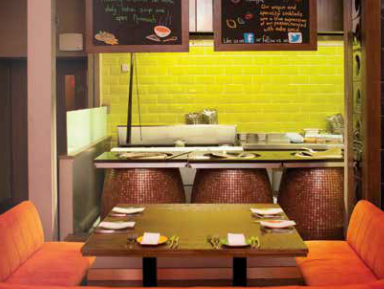 The street outside Kehoe’s was madly packed. It was the first weekend of the heatwave and the giddy disbelief was all over everybody’s faces as they drank in the sun. Outside! In the sun!

We walked past them and took the turn down Annes Lane before heading into the cool, marble entrance of Dhaba. Down two flights of stairs, I found myself in a huge, air-conditioned and windowless room, not unlike one you might expect to find in a swish hotel. I daydreamed for a minute that we lived in a really hot country. One that was so hot all of the time that coming to a cool, darkened room for Indian tapas would be a welcome relief from the oppressive heat outside.

Instead, we felt like we did feel like we were missing out on some of that fabulous weather but it was easy to forget it once we’d slurped gin-based The Tickled Pink and the whiskey-based Rose Water Rickey cocktails (€9 each). The cocktail list is extensive and clever, packed with original and enticing drinks. Later on in the meal, I enjoyed a non-alcoholic Bollywood Sour (€5.50) which would have swayed the most hardened drinker into trying. Our crunchy pappadum bruschetta (€3.50) kept us company while we perused the lengthy menu.

The concept at Dhaba is Indian tapas-style street food with a contemporary twist. Opened this year by Tariq Salahuddin, it’s an addition to his chain of Indie Spice restaurants around the country. He wanted to bring the dhaba style to Dublin in reflection of its recent revival in India. The Gol-Gappa (€4.50) were crispy shells stuffed with spuds and chickpeas served with a jar of tamarind-heavy sauce that we had to pour into the shells. The result was more interesting than straight- forwardly delicious, which seemed to be a theme for what we ordered. The Phamous Bel (€4.25) was puffed rice sprinkled with pomegranate, onion and spices and was like a curiously enjoyable bowl of savoury Sugar Puffs. The Theli Shakarkandi (€4.25) was a bowl of under-seasoned cubes of grilled sweet potato which didn’t have much to say for itself.

The Sigriwala Bhateyr (€14.95) was a lip-smackingly smokey plate of roasted quail, stuffed with peanut rice and doused in tamarind. Our Salli Keema Pie (€13.95) was basically a Shepherd’s Pie made inter- esting with the addition of Indian spices. Our fig and goat’s cheese naan (€3.25) was a sweet hit while the Brown Onion Pulao (€3.50) kept us full. We finished our meal with a Pistachio Creme Brule (€5.95) and some soothing homemade vanilla, amaretto and honey- comb ice-cream (€4.95).

The service was fast and attentive. The large room was quiet on that sunny evening, which may not have been a good representation of its usual atmosphere. We enjoyed our view of the open kitchen and most particularly of the naan chef, who worked the dough into shape by throwing it in the air and slamming it against his counter. Indie Dhaba has a bit of a tendency towards style over substance, with flashy plates and pouring sauces into bite-sized morsels, which could please as many as it could alienate. I found these flashes of showmanship and fancy crockery a little contradictory to the street food concept.

The prices are certainly reasonable and our bill came to €80.05. We headed back out into the sunset to join the revellers in Kehoe’s, leaving behind the fantasy of needing an air-conditioned room to recover from the heat in.