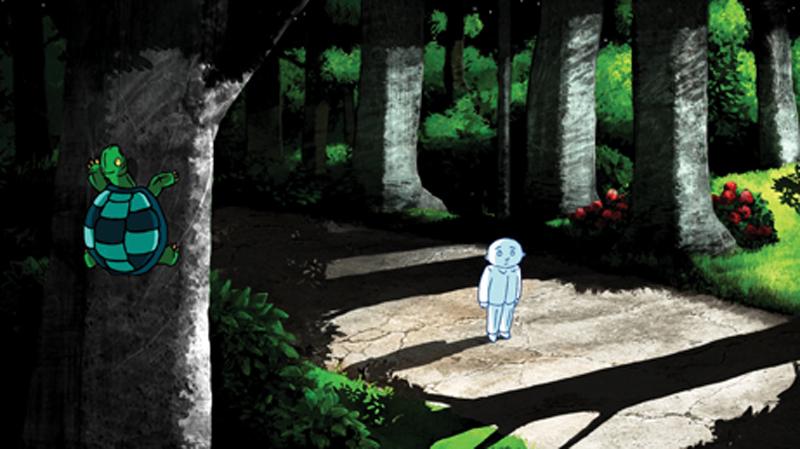 There’s a lot to like in Moon Man, the latest project from Kilkenny-based studio Cartoon Saloon (The Secret of Kells). Based on a popular children’s book, the film’s first and most striking feature is its use of a colour palette very reminiscent of its source material. With beautifully persistent black backgrounds set off by the rich colours of the characters and sets, the film captures the aesthetic of the bedtime story very elegantly.

The plot involves the eponymous Moon Man travelling to Earth, accidentally afflicting the Earth’s children with insomnia in the process, and then going home after tussling with some shady characters and making some friends. It’s simple storybook fare, yet the film also contains some of the humour and idiosyncrasies of a Sylvain Chomet film – we see a number of unusual moments where the camera lingers on a scene long after the main action has happened, one of Chomet’s go-to gags and unexpected in an animated film. There is also some humour aimed more explicitly at adults, strikingly out of place in a story so childish.

And that’s the problem with Moon Man – it can’t decide if it wants to be a cartoon aimed at kids or a sophisticated piece of old school animation to be appreciated by festival audiences and connoisseurs. The film’s pace is often tectonic, with several extended musical sequences of admittedly impressive visuals happening far too frequently for a film that makes the promise of being a storybook experience. From the opposite point of view, the film’s basic creative project (‘friendship is good’) lacks the substance to carry a more reserved narrative style.

By trying to satisfy two different audiences with very different priorities, Moon Man becomes tough to recommend. There’s plenty of skill and dedication on show for committed fans of animation, but most viewers will be left feeling alienated.
Words: Oisín Murphy-Hall