Marilyn Manson – Running to the Edge of the World 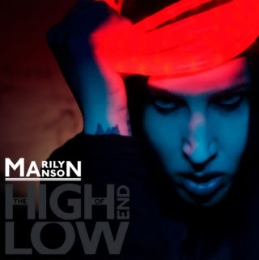 When shock tactics are your bread and butter, what do you do when you’re just not shocking anymore? That appears to be the dilemma for Marilyn Manson, Middle America’s favourite, who, it seems, is still playing with the same bag of tricks. The controversial (now there’s a surprise) video for “Running to the Edge of the World” begins with a kohled up Mazza mournfully facing the scrutinising camera lens, as a run-of-the-mill acoustic guitar melody frames the scene. Manson’s vocals are as coarse and recognisable as ever as he plays for the sympathy vote while he spills his guts about his break up with sometime-starlet Evan Rachel Wood. And this is where it all goes downhill. The ensuing bloodbath with a Wood-lookalike being trounced by a not so pitiable Manson simply screams of Try-Hard attention seeking from a middle aged man who really should know better. Dressing as the Pope and pastiching Christ is one thing when you have the songs to back up the notoriety but producing second rate anthems suitable only for Use Your Illusion is unforgivable. And if we remove the shock factor, what are we left with? Has no one told Brian Warner that the angsty teens who gothed themselves up in his image in 1996 are now all grown up bank clerks and that even his legion of detractors simply don’t care anymore. Or maybe that’s the real reason why he spends most of the video weeping into a curtain. Either way, this artist is as musically relevant today as Milli Vanilli at this point.