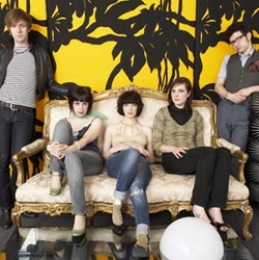 As far as label names reflecting the records released on it, New Cross-based record company Angular have their schtick down to a tee. This collection of earlier works from the now sadly non-existent Long Blondes is a timely reminder of why the five-piece were once dubbed ‘The Best Unsigned Band In Britain’, and what made them Sheffield’s finest and most stylish outfit since Jarvis Cocker strutted his skinny trousers around South Yorkshire. Five years on they could well lay claim to ‘The Best Signed Band In Britain’ moniker, thanks to a series of vicarious pop gems gelled from the pen of songwriter Dorian Cox. From the opening drone of Lust In The Movies on debut album Someone To Drive You Home to the closing keyboard chimes of sophomore LP Couples, the Blondes pulled a sharp pose, all jutting hips and diagonal hair, and their music reflected its creators.

For those who only picked up the band around the time of the Erol Alkan-produced death disco track Century, the band’s earlier clumsily-cut but effortlessly memorable garage rock and Ronettes-style shoop might come as something of a sharp badge-pin shock. The earache-inducing trebly trembles of lead singer Kate Jackson and her Thunderbirds-like sidekicks choral workout on Seperated By Motorways and the heartbreaking slow-dance Spector-lite of Polly are connected with the Blondes’ more Human League-like leanings towards their career’s end only by the always enrapturing lyricsmanship of guitarist Cox, observantly acerbic and earnestly relatable enough to make any naysayer a sycophant. Whether chronicling dead-end relationships in Giddy Stratospheres (“she’ll never take you higher than her attic room”) or hotel seduction as in Big Infatuation (“I’m the topper of the Holiday Inn/Smoking Russians and drinking Pimm’s”) intimacy is a constant.

Singles has almost enough outstanding tracks to make the greatest hits album it may mistakenly be taken as. The production is about as lo-fi as a 1960’s Dalek, and even more aggresssive and staccato-happy, a reminder that some of the quintet’s most irresistable numbers are worth tracking down: From the minimalist magnificence of b-side Fulwood Babylon to the album track kraut-dirge Round The Hairpin, this angular Angular collection should be used as a foundation text to the Chaucerian spread that followed.

See also: Pulp- His N’ Hers [Island], The Ronettes- Best Of [Abkco]