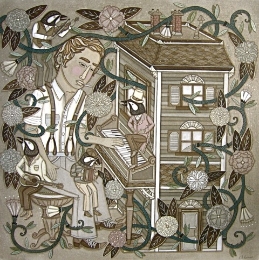 Now that his attention seems to be firmly fixed on his solo career, Brendan Benson has released another slice of power-pop plucked from My Old, Familiar Friend. ‘A Whole Lot Better’ is cut from the same cloth as its parent album, not deviating too far from the pop-rock chords and melodies which characterise Benson’s work to date and at the same time the track continues to pay homage to the decade Benson evidently loves so well, the 70s.  For the single, Benson is backed up by some of his friends including fellow Raconteur Mark Watrous on guitar as well as by Brad Pemberton on drums (Ryan Adams) and Jared Reynolds on bass (Ben Folds).  Meanwhile, the suitably glossy video combines all the archetypal, non-ironic rock god hallmarks of split screens and sliding, kaleidoscopic effects while Benson does his best Male Model impression, outshining his bandmates (and even his female companion at the beginning) in the Zoolander stakes. Nice.