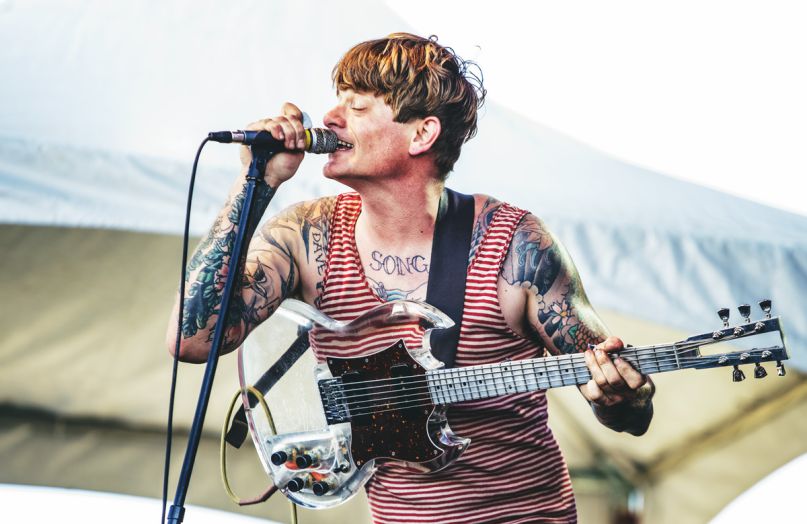 The singular potency of Thee Oh See’s pummeling, propulsive take on psychedelic garage has long since secured their position as the only truly essential band of the overdriven, frazzled scene they helped create. So viscerally engaging is John Dwyer’s nous for manic guitar assaults and a deftly timed “woo!” that the full breadth of his output is often unfairly overlooked for being a genre work.

Over the course of a series of EPs as OCS, Dwyer displayed a looser, bedroomy, almost folky take on psych – more Barrett than Erickson. Similarly removed from the norm, his Damaged Bug project served as an airing place for hypnotic, brain-feeding synth-pop. And pop is the operative word. The great irony of his work beyond Thee Oh Sees is that, as removed from the limelight as they are, these exercises often showcase a pure pop sensibility usually sidelined in favor of prolonged (though satisfying) freak-outs over at his day job.

An Odd Entrances, recorded in tandem with Dwyer’s last full-length, A Weird Exits, straddles the line between Dwyer’s extra-curricular concerns and already fully-formed world of Thee Oh Sees with aplomb, leaving us with one of the more subdued and potentially most satisfying collections of his storied career. The dual-drummer model introduced in Exits pays dividends here, not through bombast but with the subtlety employed. The synth wanderings of Damaged Bug are present and correct alongside lashings of jazz flute, all coalescing into a taut, wonderfully realised finished product.

Like this, try these:
White Fence – Family Perfume Vols. 1 & 2
US 69 – Yesterdays Folks
Jib Kidder – Teaspoon to the Ocean