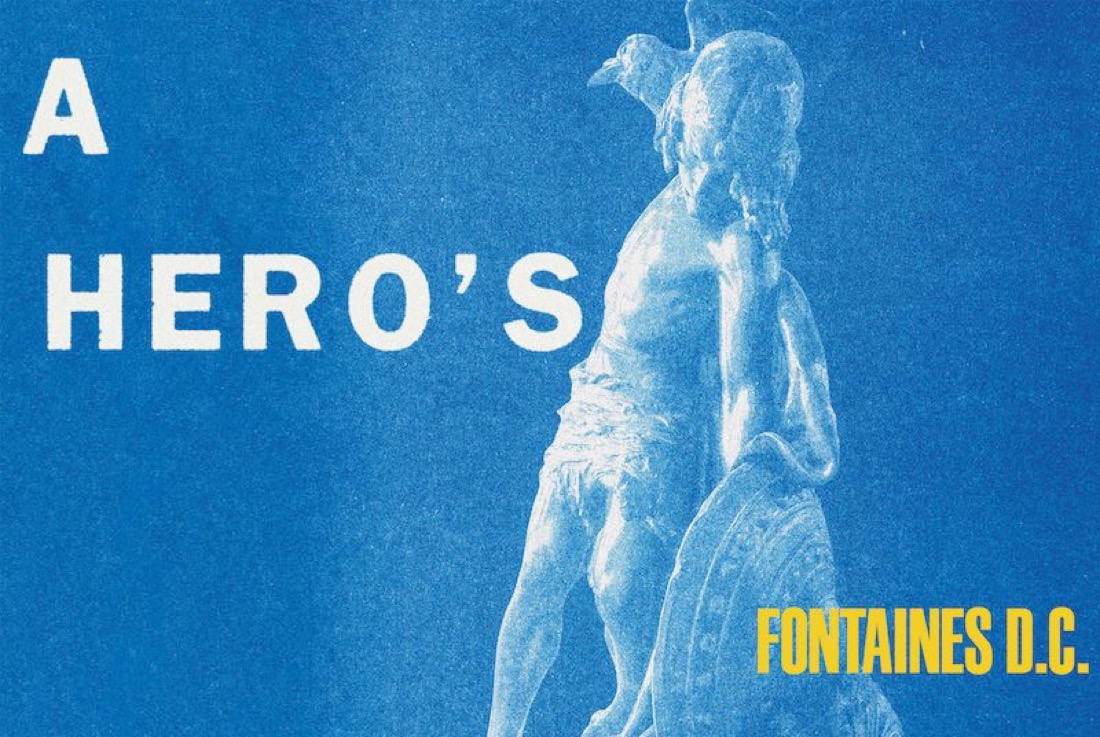 Just over a year removed from their explosive debut Dogrel, Fontaines D.C. return with a sophomore album designed to curb expectations and challenge the very idea of who Fontaines truly are. Dogrel firmly established the Dublin quintet as an outlier in the Irish music scene – a unique post-punk force with more on their minds than their long list of contemporaries. Frontman Grian Chatten’s Beat inspired lyricism and proud Liberties drawl intertwined with the skillful, emotive guitar work of Carlos O’Connell and Conor Curley made for a potent and immediately striking sound back in April 2019, yet just sixteen months on, Fontaines are hungry to explore new sonic ground.

Chatten was blunt in his quashing of fan’s anticipations for another Dogrel, labeling early singles from A Hero’s Death as a ”dismissal of expectations”, and the band waste no time marking a line in the sand between the thumping punk of their debut and AHD‘s more methodical approach, purposefully kicking off the record with the heady sound of ‘I Don’t Belong’, a brooding opener that sees Chatten explore the kind of social and existential themes that pervade A Hero’s Death over top of a murky, measured band performance.

‘A Lucid Dream’ is probably the closest that fans will get to Fontaines of 2019 here, with a frenzied instrumental that recalls its predecessor and finds Chatten in blistering form as he cynically contemplates the band’s newfound fame. By the same token the track almost acts as a passage between both records, with Chatten conducting the kind of sermonized refrain that comes to define A Hero’s Death over the course of its forty six minutes. With this and the similarly singular, incessant arrangements of ‘Love is the Main Thing’, ‘Televised Mind’ and lead single ‘A Hero’s Death’, these kind of abstract mantras (‘The rain changed direction” ,”Love is the main’thing”,”That’s a televised mind”, and most memorably ”Life ain’t always empty”) dominate the record and in turn gift it a kind of spiritual, psychedelic power that reveals a unique layer to AHD which enhances the record beyond the sum of its parts.

The gripping effect of these kinds of ritualistic refrains is never more evident than in the album’s barnstorming title track – a thrashing, hypnotic wave of post-punk that finds new life in the context of its tracklist, casting an ominous, anxious shadow in its glorious moment as the intense centerpiece of the record. By contrast, some of the album’s best moments are also found in its more introspective, quieter moments like the elegiac ‘Oh Such A Spring’, ‘Sunny’ and the particularly the poignant ending note that is ‘No’, all of which grant Chatten full poetic licence and allow him to emit an unmistakably McGowan-esque shine.

All of which is to say that A Hero’s Death is a more distilled and concentrated effort than the band’s previous work in a mostly positive way. Fans of the band’s original, more accessible dynamic may find it difficult to connect with AHD straight away for the lack of singalong, festival-ready hooks in the vein of ‘Liberty Belle’ and ‘Boys in the Better Land’, but this is an album that rewards repeated listens and patience, while that may not be ideal for fans seeking out anthems to match Dogrel‘s frenetic pace and immediacy.

Instead, Fontaines develop a better sense of cohesion and flesh out themes that tie their second album together as a concept rather than a collection of tracks. Into the bargain, they deliver an ultra-focused and mature record, one that displays a considerable evolution for the young Dubliners and further establishes them as pioneers in the Irish music landscape and potentially beyond.