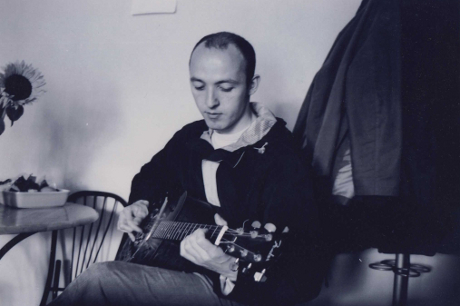 Mumblin’ Deaf Ro is the stage name of Dublin’s Ronan Hession. Dictionary Crimes, released on Popical Island last week, is his third album and sees him dealing with the theme of family life from the inside. The album further cements his reputation as one of the finest – and most underrated – lyricists in the country. It is his most intimate and assured statement to date.

You can listen to the album (and buy it, if you like) from Ro’s Bandcamp and follow his blog at http://dictionarycrimes.tumblr.com/

Two people said to me “I didn’t know he was going to make another album”. You didn’t say anything specific to that, did you?

No, I hadn’t but going back to when I did Señor My Friend, I had in my mind and I think I had said at the time that I’d do three albums. I was asked that around the time when I did the second album, fully expecting people to hold me to my promise then not to do any more albums. I guess it’s just trying to be somewhat scarce about the whole thing, not just getting into the mindset of churning out the next ten songs I write. I want to make sure that, if I do some more, I feel it is better than the previous one or it is different in some ways. But I had sort of said I’d do three so I knew someone would ask me that! I do sort of feel at the moment that everything I’ve learned about music and writing songs has built up to, on a certain level, to this album. I feel quite satisfied, on a personal level. As you go through albums, what I find is, you notice an improvement. Not necessarily on some graph starting to point upwards but that you’re getting closer and closer to what you were actually trying to say in the first place. This one I feel is very well matched to the contours of my life. I feel quite at peace with the whole thing now, a sense of accomplishment. It’s a bit like going into the delivery room in a hospital and asking a woman who has just given birth when she wants to have sex again. The timing isn’t great! I’m just trying to get this one out.

There’s a distinct development, not just in the way you write your own music but how independent artists in Ireland produce their own work and how a lot more of them are more sure of how they want to do their own thing. So in terms of your original goal, what was that? What is Mumblin’ Deaf Ro compared to the bands you were in before?

In February it’ll be the 20th anniversary of my first gig and it took me about ten years to outgrow influences, to really become confident in how I thought music should be made. There were a couple of recurring themes when I read back through the blog and old interviews, things I said in the past which I still believe now. How the scope of what is discussed in pop music is far too narrow. I think the extent to which you can use musicianship, not as a way to show technical ability but as a way of broadening vocabulary, the chords that you use give you more colour to your songs. Especially when I started playing solo where a half-hour set on guitar can get quite samey quite quickly unless you have some way of varying it. So the instinct was always to do songs with a strong lyrical content. That’s the music I grew up with, I suppose the ’80s pop song-writers like The Housemartins, The Smiths, The Jam, Billy Bragg, Lloyd Cole, it was just considered normal that people who wrote interesting music would write lyrics to go with it. It wasn’t really a big issue. I don’t know whether it went out of fashion or peoples’ listening tastes changed or music got louder but there just seemed to be less expected of musicians, to make an effort with their lyrics. That’s probably something I’m just conditioned to think that way.

I can’t say I had a particular vision but certain instincts seem to endure over the years. When you’re drawing on them ten years later, you think they must have been something close to me. That said, I don’t want to be stuffy about lyrics. Sometimes dumb lyrics are the right lyrics for a song. If you look at doo-wop music or pop music from certain eras, they wrote quite simple and straightforward lyrics but they were exactly right for those songs.

You said something on the blog as well, something I really enjoyed. That was the bit about where you were talking about how you learned finger-picking and how you felt it was a means to differentiate yourself from other people with acoustic guitars.

If you’re playing a half hour or forty-five minute set, if you strum every song or use a very limited range of chords, it just won’t be very interesting. You have to work on writing songs that are not just individually interesting but that work as a set. In putting an interesting set together, you have the basis of writing an album. Engaging someone for forty-five minutes, in a unit. Often if you’re doing an album and you’re writing one song at a time, you get to a point six or seven songs in, where you start to think “what types of songs is the album missing?”, you know? What do I do that hasn’t gone into it yet, musically? Does it need another type of song?

I would never try and deliver an upbeat moment. I was talking to someone I know from another band and he said, “You could have put a bit of light relief in there”. And I kind of felt like there’s no point. I feel it’s an accurate album, there’s no point in trying to soften it up for the sake of garnishing it a little bit. For example, the last song I wrote on the album was a song called ‘On Being Bill Cosby’. I wanted to do a song on the album that had quite a long chord sequence, I hadn’t done that on the album or on any of the albums. I wanted something which didn’t repeat too soon and went on for quite a long time before repeating. In a way the chord progressions would not be varying distinct progressions, they would almost blend into each other, you could almost do them like organ chords. I wanted to do something more overt about parenthood and the extent to which exhaustion and tiredness competes which the love and all the things you get from being a parent, but both of those things exist at the same time. Those were things I hadn’t yet done on the album. When you’ve only got one or two spots left, you’re starting to run out of ideas but you’re also starting to get ideas and get quite editorial about what would really work. You don’t just throw on a reggae song because you don’t have a reggae song on there!

The songs take a lot of effort and work to get finished, are there many you don’t use?

There are no spare songs. There are only thirty songs to show for the last ten years. I spent the first ten years writing, writing, writing, very quickly and it got me to a point where my triage works! I can tell quite early whether something is going to work or not. What I tend to do is write something that’ll have a bit of a melody line and I’ll park it for years until I’m able to finish it. I’ll work on new things in the meantime obviously. There are no spare songs. I didn’t have a long list which I picked ten from. I wrote them one at a time, for this album. When I got to the six or seven song stage, that’s when I hit a bit of a wall because I was trying to write a themed album this time around.

That was overt was it?

Yeah. I read a couple of books, the periodical, Granta – they do a lot of new writing and a few themed editions about fathers and mothers and families – and I would’ve read a lot of short stories when the kids were born because I didn’t have the attention spans for longer stories, and I felt that most people write about family from the point of view of memoir. It was a recollected picture of a family. So they were really writing about, not just their family, but also about how time passes, about their past and their own growth. There aren’t that many examples I could find that tell you what it’s like to be in a family. Everyone says they have these things called families but what is it like to be in one? What happens? You have all these relationships coming at you from all angles. That’s something that has always fascinated me because a lot of the interesting characters you find are maybe middle-aged, like Homer Simpson or Tony Soprano or in books like Frank Bascombe in the Richard Ford books or Harry Angstrom in John Updike. It’s this situation where you get to the point in life where your relationships are going in every direction because you’ve got parents and children and there’s change happening on all sides of your life. It’s a very interesting time to write about a person so I kind of felt that there was a lot to write about there. Certainly I didn’t feel like the family situation had really been written about except in the recollected way. I wanted to do something more contemporaneous, to tell you what it’s like to be in one at the time, when you’re there, not the way you remember it afterward. That was a deliberate feeling I wanted to get into it.

Did you break your leg?

No, I didn’t break my leg! That’s the one thing that isn’t autobiographical, well spotted. I actually hurt my back and I was out for two weeks, nothing serious. What it is really is, that song is like the epilogue of the album for me. The song that precedes it is the most raw song on the album, called ‘The Birdcage’ and what the last lines in that song and ‘My New Broken Leg’ are both about the idea of starting to emerge from the fog of grief and starting to notice the lovely things you have. It’s not necessarily a very up beat song, musically, but it’s about the beginning of hope and healing process. You’re not out of it, it’s not behind you, even as a person I don’t feel as though those things are behind me. Even though they’re on an album, it’s not like I’ve dealt with them and processed them and am now ready to talk about them. It’s not quite like that.