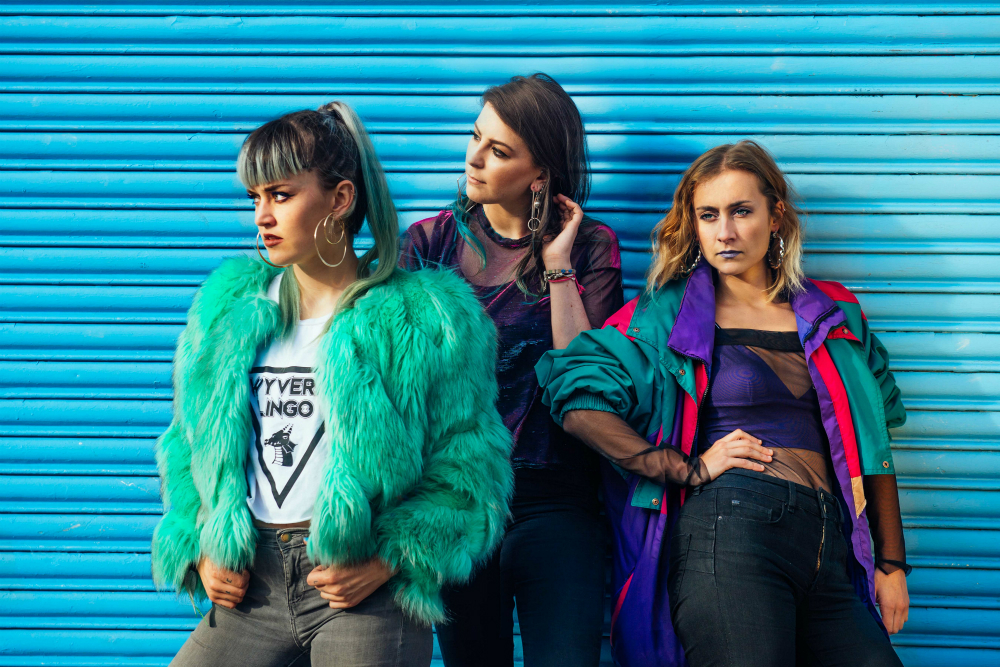 Wyvern Lingo started as friends first and foremost. Even now, on the cusp of releasing their highly anticipated debut LP, the trio are plainly pals above all else. Our conversation is interspersed with regular asides, reflections and in-jokes born of their rich history together. This internal dynamic of transparency, sincerity and support has proved fertile for Karen Cowley, Caoimhe Barry and Saoirse Duane. Having first gained wider attention as a folk-inflected harmony group, as all of three matured as both songwriters and players, their sound evolved to showcase the influence of the Pop and RnB that soundtracked their shared adolescence.

Their self-titled debut is brazen in its ambition. Balancing deeply personal songs with those examining societal ills, whilst remaining radio-ready is no mean feat. Almost miraculously, the ladies tread this line with aplomb. Lead single, I Love you, Sadie is vital, fiercely intelligent and with charm to spare. In other words, exactly the kind of pop music that we need in 2018.

So, you’ve been talking about there being a little change in the sound of this record. I Love You Sadie being one of the first tastes we’ve had.

S: I wouldn’t call it a shift. As a band — our sound has matured. We’ve put a lot of work in and it’s kind of just naturally gone there. It felt like a very organic progression.

K: Also, the fact it’s the first single was not something we had planned when we were working on the album. That was all unexpected.

C: Yeah. I always thought I Love you, Sadie was going to be a juicy little bonus track as opposed to a lead single.

K: I’m reading Slow at Work [Debut book from Totally Dublin’s own Aoife McElwain] at the moment and it seems to be really relevant to everything in my life right now. One of the things she talks about is people’s perceptions of what you’re doing versus what you’re actually doing. I think that’s something we’ve been dealing with. We were two years writing and demoing [these songs] and I think people’s perception is “oh what a big change!” and really it’s been happening for a long time. If you’ve been at any of our live shows, I think they would give away that it’s really been a constant progression. You forget that people only really see you around releases and that’s what they base their perceptions on.

C: We find it kind of hard to shake the reputation we got with the first EP. People are still calling us a folk act.

So even when you were operating in a space that people would have considered folky — in your mind you were always working toward this more RnB sound?

C: I feel we didn’t even occupy that space for too long! We put out the first EP when we weren’t really that solid as a band. It’s great and we’re really proud of it. But, even then, when I imagined the sound of Wyvern Lingo — that wasn’t it. For example, we re-recorded Snow from our last EP. It was very much a folky track but what I always imagined it being was this kind of Massive Attack-y, vibey track. We just didn’t know our way around technology. That all changed when Saoirse and I got i-Pads and started used Garageband. Suddenly our demos could start to take on this new life and even some of the stuff we did on Garageband has gone directly onto the album.

How far into Wyvern Lingo being a going concern did you start to get to grips with this stuff?

C: Basically when we got our record deal. To be real, that was the cash injection that let us get the gear.

That’s kind of remarkable. Getting the gear was integral to arriving at the sound you had in mind but you were also already signed…

K: I think the more you demo and the more you understand – the easier it gets. It just took us a while to get on the self-demo buzz.

C: I guess we were just trying to manipulate our instruments to get the sounds we wanted and it was bit like “ehhh, this isn’t really working”.

K: You guys bought i-Pads and I bought a Moog and that opened up so many new doors of sound, I guess. 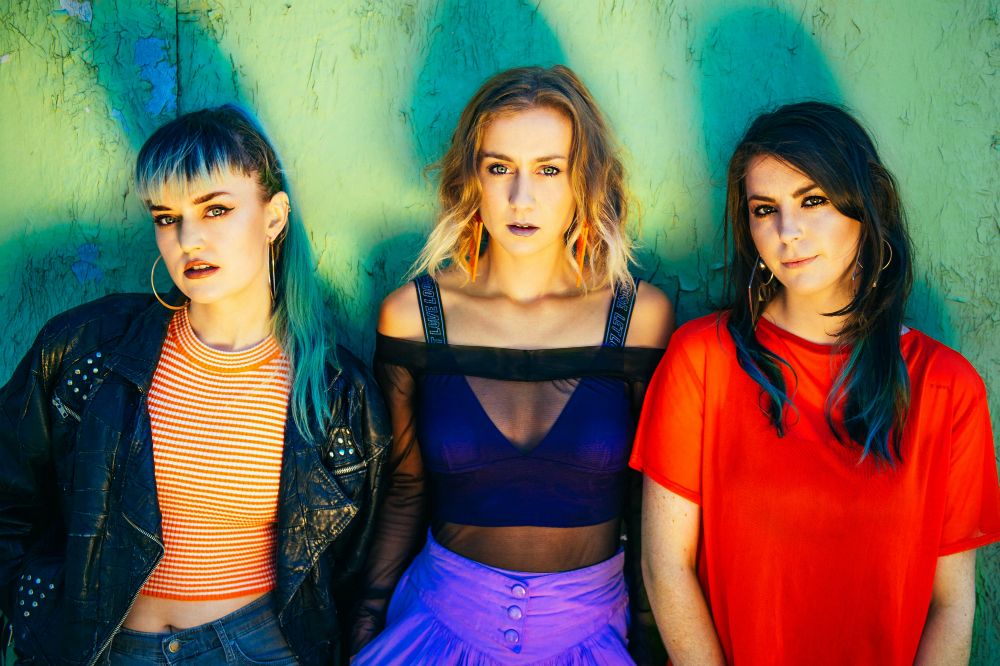 So, when you guys were first starting off, was Wyvern Lingo principally a vocal harmony group?

C: No no, harmonies were always kind of the second thought. But, we did know that was what people were responding to. That’s why the first single we put out was Used, which is mainly an acapella track. I guess that was a kind of ballsy first single but it did the trick.

Having moved into a more “pop” mode — do you find it hard to strike a balance, especially in a social issue driven song, between specificity and universality.

K: We try to avoid trying to write in a way that will please people…

C: Specifically with I Love You, Sadie — If you start to write it in a way where you’re thinking “how will people take this?” it kind of stifles it…

S: It’s the beginning of the end…

C: As much as we’re very aware of what the lifespan of the songs could be and that they could exist in the public eye — you can’t think about lyrics like that or you’ll just wreck it.

Can it be difficult to be wholly sincere when you’re trying to appeal to a broad base of people?

C: We find it difficult to get involved in “selfie culture”. There’s a lot of things about social media that is just self promotion. I wade through all this bullshit that I feed myself being like “this is false, this isn’t real”. But of course it’s not! Nobody thinks it’s real!

K: …We really try to be as sincere as possible and sometimes that makes it way more difficult to put yourself forward. Sometimes you have to step into some kind of persona, especially online. It can be a weird balance.

C: There are certain tracks that were a little controversial and didn’t make it on to the album for that very reason. We weren’t going to change the lyrics so they just didn’t get on — they just weren’t right for this record.

That makes perfect sense though. It can read as quite disingenuous when you get popular acts who take very explicit political positions on extremely serious issues while gladly serving as the face of a cosmetics company or whatever.

K: There was something we were queried for ages ago that didn’t come about. We were all a bit “Uuuugh, I dunno if this is right?”. I was talking to my friend Andrew [Hozier] about it and he put it really well when he said “You know what’s really annoying? Nobody will ever know about all the stuff you don’t take”. Nobody ever knows about all the little moral things in life that you said no to. You have to just make the decision for yourself. If you’re not comfortable with something — don’t do it. I had to be like “Damn it, you’re right. But….damn it!”

You guys have taken to recording your own podcasts too, right?

C: Yeah. We’ve released one already about I Love You, Sadie. It’s a lot of waffle as you can imagine! It’s kind of like Song Exploder but a little bit more drawn out as we go through the lyrics and stuff. We kind of copied our friends The Eskies — they kind of do a general podcast and might mention a song. We decided to be a bit more structured about it. Usually, after interviews, we’re kicking ourselves about how we talk about songs. You always end up saying something the wrong way. So, this is just a chance for us to be relaxed and chat about it ourselves.

S: I’d like to see more physical albums being bought rather than just spotify or whatever. I miss that, I used to have hundreds of CDs as a kid. We’ve put so much work into the album and the artwork Caoimhe did for it is amazing, I just want people to buy the physical copy — It tells the story. 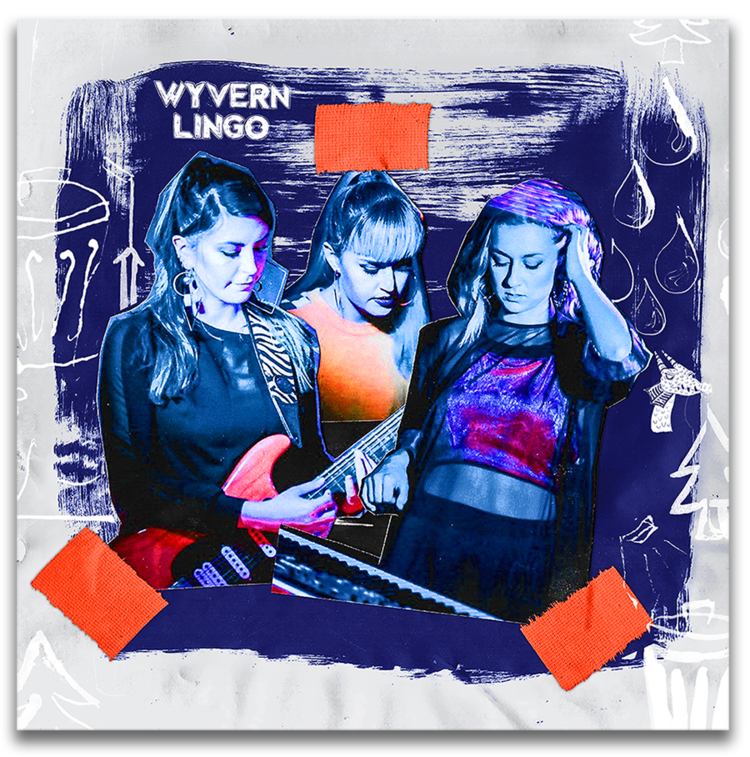 C: Now that Saoirse says it — most the albums that I’ve loved from the last year — I’ve never seen a physical copy of them.

C: I don’t even know what their album artwork looks like and there I was pouring over ours for some reason! No fuckin’ need. [Laughs]

K: For me, there are so many really really great female acts at the moment and they’re just not getting the line-up spots and I don’t get it. I’d love for this year’s festivals to not be the same old boy stuff. Mainstream Irish music seems to be incredibly male dominated with the same old. No disrespect to anybody, but there are up and coming women in pop, like Soulé, and they’re just not getting the airtime and the festival spots. I’d like to see that change this year.

And what would you like to see less of this year?

C: The radio sometimes is so full of very samey, flash in the pan pop music. I haven’t enjoyed a big pop song in so long…

Wyvern Lingo’s self-titled debut album is out Friday February 23, via Rubyworks, with a release party that night in The Button Factory.