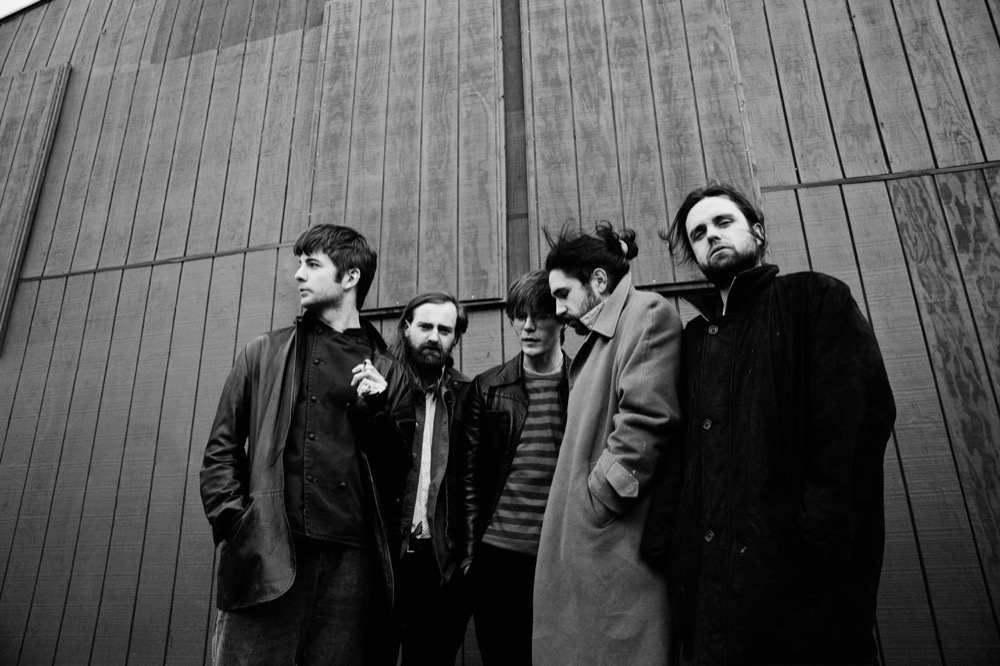 Riding the wave of hefty critical acclaim for their debut album Dogrel, the Fontaines D.C. share their earnest thoughts on being Irish.

“What we’re seeing now isn’t as much a changing of Dublin as a removal of Dublin. A removal of what it means to be Irish in a cultural sense”

It’s been a while since a domestically cultivated artistic export has garnered a degree of hubbub comparable to Fontaines D.C. Sure, Hozier fever isn’t too far in our collective rear-view, but the Wicklow-born foghorn of soul never quite appealed to his Hiberno cred with the same vigour as the five stone-faced men in overcoats that make up the indie troupe.

Meeting the band in a city centre hotel, it’s quickly apparent that these are some young men very much in demand. The band members are spread across a variety of different tables; conducting interviews in pairs and trios – a rare and concerning circumstance. Hierarchies within bands can be delicate things and oftentimes an unsupervised rhythm section can make for cagey conversation; reticent as they can be to deliver a quote that might not be to the liking of their colleagues downstage. Thankfully, early into the chat with guitarist Carlos O’Connell, bassist Conor Deegan and drummer Tom Coll, it’s abundantly clear that there is no such chain of command within the Fontaines. Opinions, intermittently of the controversial variety, roll out unfettered. The Fontaines plainly consider themselves a band with something to say, whether you like it or not. 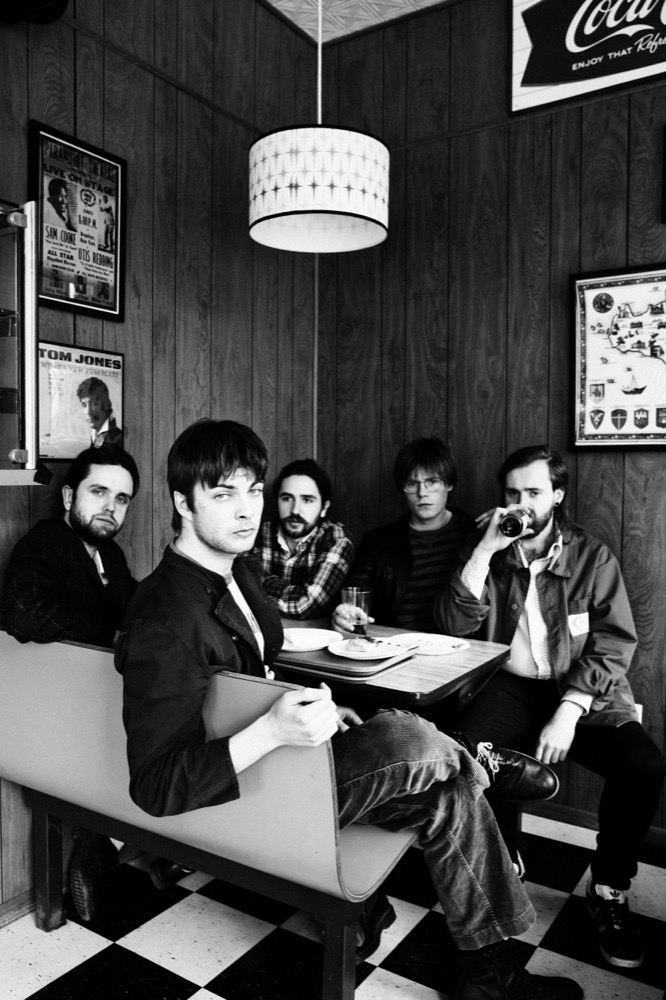 Romantic Ireland (dead, gone or otherwise) is a key source of inspiration for the curtly barked street-level lyrics that first brought the band to attention of many. In fact, the D.C affixed to the hind of their moniker is designed to imbue the troupe with this sense of place; D.C = Dublin City. With the five members hailing from around the country, the quintet’s preoccupation with the nation’s capital began to gestate during their time in Liberties’ based music college BIMM. With “authenticity” being the most oft-ticked box on a Fontaines interview bingo card; there is a certain push and pull associated with their emergence from the hothouse atmosphere of a “star school.” Judging by the visible bristling at the mere mention of their alma mater, this line of discussion seems neither a new nor particularly welcome one. I wonder if being exposed to the business side of their craft from their very inception coloured the band’s approach or values.

“Quite a lot!” begins O’Connell. “That’s probably one of the reasons that we feel so strongly about doing things our way. When you’re being exposed to so much conversation about the things you should do, it’s really easy to let those thoughts infect your mind and the way you approach things. Everything from that side [BIMM] would be pushing us to do things a certain way because we’d get more success. But that just feels wrong and counterproductive since everyone is just going to see right through it, and what’s the point of that?”

Considering the band once, in essence, functioned in much the same way as any other college group project; it’s remarkable to consider that the very songs that the band are hearing bellowed back from sold-out rooms, were once being designated letter grades. This peculiarity isn’t lost on Deegan.

“I remember towards the end of college we did an assignment that was for Tom’s live performance module. I think we played Hurricane Laughter… they [the adjudicators] were saying “Maybe the song is too repetitive, maybe it needs this or that.” It’s kind of funny looking back on that now, knowing that that’s a tune on an album that we play in front of all our fans. To think that at some point somebody was like “Maybe you could put a few more sections in this” – it’s funny. The whole objectivity thing is a complete farce when it comes to art. There is no objectivity, there is just what people have been conditioned to consider the norm and then they’re correcting your songs to the norm. So, it’s not objective at all, it’s actually very subjective to the institution. It’s inherently flawed and slightly redundant.” 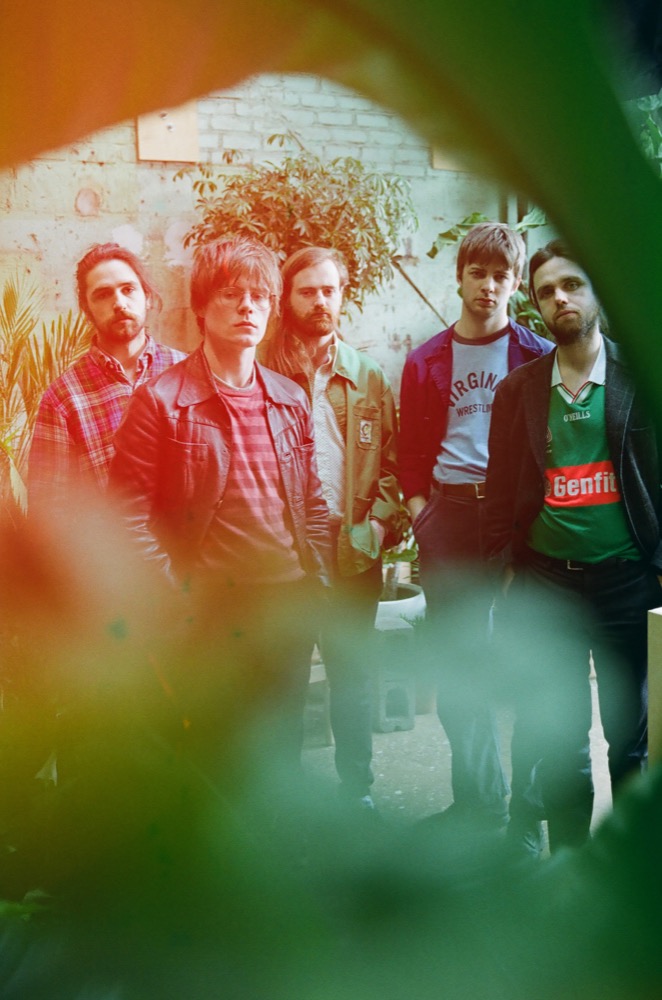 As each member tackles any given question, they routinely turn to their compatriots and proffer a “what do you think?” One point of absolute certainty is that, for Fontaines D.C, the Dublin of their songs is more than a romanticised ideal. “I don’t think it’s a romance for a bygone time,” asserts Deegan. “It’s an appreciation of Irish culture and what an Irish personality or an Irish community is really like. That stuff has become whitewashed somewhat by the influence of Britain and America. What we’re seeing now isn’t as much a changing of Dublin as a removal of Dublin, a removal of what it means to be Irish in a cultural sense.”

I wonder if the band ever feels the need to repitch their Irishness when in conversation with journalists from elsewhere. “In terms of repitching Irishness – I think no,” Deegan goes on. “There is an insecurity to being ethnically Irish that we have developed from being made Other for so long and being pushed down by the British. We’ve been made feel lesser, so there is a lot of performativity that comes into place when you go abroad. Irish people will try to be funnier or try to play up to Irish stereotypes. You see it a lot and it’s really shit because we can be serious artists and taken seriously just as much as British artists or American artists. We don’t have to take the piss. You see it especially with Irish politicians. Remember when Leo Varadkar went to meet Justin Trudeau and they were laughing about his funny socks? Why can’t you just be a good politician based on your politics and your rhetoric and your policies and not some stupid PR stunt about you being this funny Irish lad? It’s so stupid.

Being Irish – in America and Britain in particular – you get a lot of questions about Brexit and as long as it doesn’t damage the Good Friday Agreement, I couldn’t give a toss. We’re a Republic for a reason, it’s our right not be involved in British Affairs anymore, we fought so hard for it. So many things in Ireland need to be sorted out and we need to try and maintain what is left of our identity.”

Deegan goes on, “We found an appreciation for the Dubliners a few years ago and Girl Band created the missing link in the thread of culture that runs from the ’60s until now. When they sing songs about a pigeon eating a chicken fillet roll outside Centra – that’s as doggerel as Finnegans Wake. I feel like there is a reconnection now to all our cultural history and identity. If there is one thing I’d like for us to do, it’s to influence or inspire people in Ireland to not be ashamed of what it is to be Irish and to express what’s going on around them in real art.”

One aspect of the Irish culture unmolested by imperial forces is our flair for begrudgery (see the opening paragraph’s characterization of Hozier). I wonder if the Fontaines have encountered much over the course of their rise. “Not yet, no. People we went to college with maybe?” begins Deegan, with a perceptible glint in his eye. O’Connell continues, “You can imagine tonnes of people who spend years working on their chops and then they see a band that plays three chords on each song getting the attention – they’re probably pissed off!”

Dogrel is out now on Partisan Records.

Fontaines D.C. play All Together Now in August (sold out) and Vicar Street on Saturday December 7 & Sunday 8 (sold out)