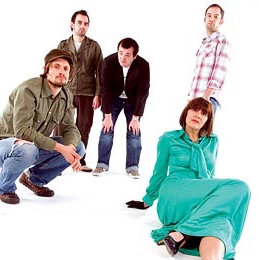 If Niamh Farrell of Ham Sandwich fame thought she had it rough answering for her band’s nom de plume she should spare a thought for poor Danielle Moore who, ever since joining electronic disco act Crazy Penis in 2001, has had to ward off questions about a name she’s never even been comfortable with.

“I think when the lads first started off they werent out to shock. They were just out to produce and play music.” She tells me, taking a break out of her sunny bank holiday to plug the group’s gig at the Sugar Club this Saturday. “They were students, they didn’t expext it was going to last forever”.

But it’s lasted a lot longer than they thought, and, since the two Nottingham based DJ’s had to beef up the lineup to recreate their sound live, it was decided that their boyish alias had to go. Now going by Crazy P, the title track of their latest album Stop Space Deliver is available now.

Is there any date, bar Saturday’s gig at the Sugar Club of course, that you are really looking forward to playing? I see from your forthcoming tour dates that you’re playing Sligo, which is rather random?

We try and get as many gigs as we can when playing Ireland – usually Cork, Galway and Dublin. But last time we did Sligo instead, in a place called the Clarence Hotel. I think they were surprised by how many people enjoyed our set and they invited us back.

We’ve also got a really lovely trip over to Croatia that we are looking forward to, to a festival called the Garden Festival, in an un-spoilt village on a reclaimed piece of land, which they’ve turned into a club and an outdoor stage.

In general its just good to be back on the road, you know? You’re not running out of clubs in the rain, everyone is a bit more relaxed, a bit happier.

Do you relish the challenge of winning over new fans at a festival?

That’s it. You get to play to people who have just stumbled across you and not expecting anything. It’s a good way of reaching out to people. It’s exhilarating as well because you’re not sure how people are going to react.

There’s always a danger of the word being over used. Once a genre comes back in fashion everyone wants a piece of it.

It’s a loose way to describe a new movement that’s going on. There are elements of old disco that have been brought up to date with more electronic sounds.

How aware were you of Crazy P before you joined them?

My boyfriend used to play Crazy Penis all the time because Tim (Davies, band mate) used to go out with my housemate. We used to have parties and that’s where I met Jim and Chris(Baron and Todd, band founders). They spotted me Djing and singing – along badly – to the tunes I was playing and they said they were looking for a singer. I went down to the audition; not expecting anything, then did a few gigs and it sort of snowballed from there.

What were your early days in the band like? Was it automatically a band of equals or did Jim and Chris still see it as their baby?

When you commit to a project for four years you’re always going to be quite precious about what’s done to it and I think because they never had to work with vocals, or consider vocals it was new for them.

I never considered myself as a singer or a performer either so it was new to me too and they were trying to record my voice in the best way they could and I was trying to give my all without being nervous or whatever.

They were really good. They put me at ease and held my hair and got me to come out of myself a little, usually involving a bottle of wine. But it was their project and I respected that.

Crazy P used to be called Crazy Penis? Was part of the reason that you paired it down also because you no longer needed the shock value, your music stood for itself?

To be honest I never felt comfortable with the name. It sounded like a grunge band. I think we just grew out of it. It had had its day. It came against us for radio play and it just didn’t flow of the tongue for the over 50s. I’m fronting the band and my 80-year-old Nana wants to go into HMV and buy the album. And the thought of my Nana even saying the word penis is like aaaaarrrrggh.

Is there any act whose live performance is a real inspiration for you?

Rosin Murphy. I think she’s incredible. As a songwriter, a lyricist, a performer, she has all the things I would want to work towards.

And I saw Grace Jones last year, it’s just incredible. I watched the whole gig with my mouth wide open. It’s like you’re in the presence of some abnormal force.

If I’m still walking in heels that high at sixty it will be some feat.

Crazy P play The Sugar Club on Saturday, may 30th.

For all you club listings needs, look no further than here – https://www.totallydublin.ie/one-off-shows-listing.html